The Golden Globes took place last night, though I couldn’t find any way to watch them from the UK so I just critiqued the dresses online instead, and as it’s now 2020 I’m simply going to assume that every single one had pockets.

It was therefore vaguely exciting waking up this morning to find out who won, even if I’ll have forgotten by tomorrow. 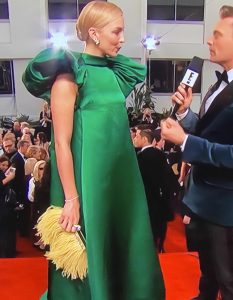 This was the year of puffy short sleeves, which was good planning when you see there was soup on the menu. And not just any soup – soup planted (see what I did there) by VEGAN EXTREMISTS. Ricky Gervais hosted for the fifth time, and I did like his gag about The Irishman clip. 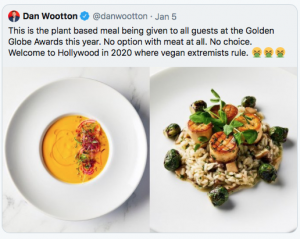 The Golden Globes awards are run and voted for by the Hollywood Foreign Press Association (HFPA), a small organisation with only around 90 members: journalists and photographers reporting on US entertainment news for mostly non-US outlets.

They often throw up some odd choices, and that’s before you get to what they think constitutes a “comedy or musical” (The Martian a few years ago, apparently, though to be fair it did have Matt Damon wiggling his naked bottom to disco music, which was both funny and musical).

Still, the more awards there are, the more chance for people to be recognised who might not otherwise be, and it means more dresses, even if that’s not very sustainable, environment-wise.

I know it gets more column inches to wear a ballgown made out of old coke cans to prove your recycling credentials rather than just wearing an expensive designer frock twice, but maybe they could swap them around a bit, and at the Oscars we could have JLo in Cynthia Erivo’s gorgeous sequinned number, Charlize Theron in Fleabag’s sparkly dinner suit, and Her Royal Highness Helen Mirren in Billy Porter’s incredible suit and feathered train. It’s not as if most of them aren’t exactly the same weeny size. 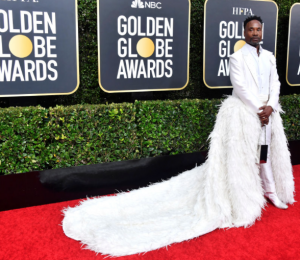 “This isn’t a sitting outfit, this is a standing outfit” Billy Porter told Ryan Seacrest

Okay – so, the winners! I’m focussing on movies only, as though the Golden Globe awards film and TV I hardly get the chance to watch the goggle box unless it’s The Thundermans with my children (which I have to say is growing on me). Though I have seen the first episode of Fleabag, and the first two episodes of Game Of Thrones which were all boobs and beheadings (that’s GoT not Fleabag, unless it gets considerably darker during series 2).

There weren’t too many surprises last night, though The Irishman went home award-less. I’m delighted Taron Egerton won best actor in his category – he’s campaigned hard and with great charm, and Rocketman (which I think is fabulous) seemed to have slipped from people’s minds.

I’m sad neither Jonathan Pryce nor Anthony Hopkins won for the excellent The Two Popes – no I didn’t think watching two elderly white men walk around chatting for two hours would be good either – though I suppose retribution will come when the HFPA voters get to the Pearly Gates.

You can check out winners and also-rans, sorry, I mean nominees, below.

Best performance by an actress in a motion picture: drama 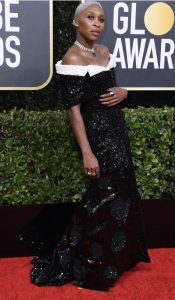 Cynthia Erivo, nominated for Harriet. That gorgeous dress took 800 hours of hand-beading. I could’ve made it while I was watching The Irishman.

Best performance by an actor in a motion picture: drama

Best performance by an actress in a motion picture: musical or comedy

Best performance by an actor in a motion picture: musical or comedy 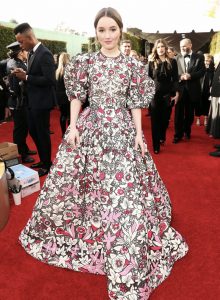 Kaitlyn Dever. Lovely dress, plus reminded me I need a feature wall

Brad Pitt, Once Upon A Time…In Hollywood (winner)
Tom Hanks, A Beautiful Day In The Neighbourhood
Al Pacino, The Irishman
Joe Pesci, The Irishman
Anthony Hopkins, The Two Popes 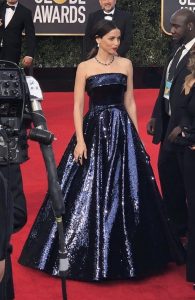 Tongues Out. Ama de Armas looking stunning. Hats off to the Knives Out costumier who tried to make her look frumpy in the film and failed utterly – you tried, and we’re grateful. 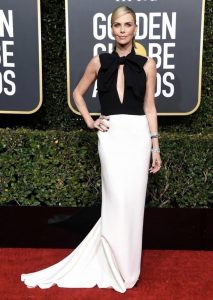 Tom Hanks (This is an honorary Golden Globe for “outstanding contributions to the world of entertainment”, given to those working in film. Its TV equivalent is the Carol Burnett Award which this year was given to Ellen DeGeneres).