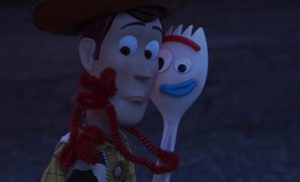 Homemade toy Forky, unable to comprehend that he is alive, and then unwilling to accept his new role as a plaything, is desperate to be disposed of as a used spork should be.

For him trash means warm and safe, and his constant attempts to throw himself in the rubbish basket (with “get in the bin” the latest online insult, is this a comment on modern cancel culture?) are both hilarious and disturbing.

In fact much of Toy Story 4 is both hilarious and disturbing.

No one could accuse the filmmakers of taking the easy way out; it’s boldly asking the biggest questions of all – no, not how do astronauts go to the toilet in space. How and why do we exist? Why are we conscious and what does that mean?

From metaphysics (Forky trying to understand his own reality now he is alive) to existentialism (he and Woody grappling with purpose, free will and meaning in life) we’re deep into philosophical territory here.

These are huge themes, so thank god there are lots of jokes too. The loudest shrieks of laughter from the children in my screening came when plush toys Bunny (Jordan Peele) and Ducky (Keegan-Michael Key) imagined three different ways of attacking an old lady. The next biggest guffaws came when Buzz Lightyear was whacked on the head by a loo door opening. (Children reassuringly do know their purpose, which is to be small, bloodthirsty, toilet-obsessives.)

Life finds a way, as Ian Malcolm said a quarter of a century ago in Jurassic Park. And so on her first day at school Bonnie, like a benevolent Dr Frankenstein, creates Forky (Tony Hale). Presumably it’s her love that brings him to life, though it could be that particular wonky combination of a plastic spork, pipe cleaners and eyes that can’t even goggle in unison. It’s nearly always the most basic, scruffy toy that we love best though, so it’s no surprise that she instantly adores him above all others.

Woody (Tom Hanks), is now rarely played with (“that’s the third time you haven’t been picked this week” the alarm clock bluntly reminds him) and so takes it upon himself to teach Forky what it means to be a toy. As Bonnie, her parents, Buzz, Woody, Forky and the rest take to the road in the family campervan, Woody is determined to keep Forky safe for Bonnie, thwarting the spork’s repeated attempts to fulfil his original calling.

When Forky escapes, Woody goes after him, finding himself on an adventure that takes in a carnival (hello, unwinnable stall prizes Ducky and Bunny), and a creepy second-hand shop, home to sort-of villain Gabby Gabby (Christina Hendricks), and failed motorcycle stuntman Duke Caboom (Keanu Reeves). None of them has a kid, something that leaves them all unfulfilled in some way.

Duke Caboom, Canada’s greatest stuntman, is haunted by that first day when he disappointed his owner by being unable to do the stunts he could perform in his commercial. Underneath Caboom’s bluster and bumptiousness, he’s wracked with insecurities. Even Woody, as he teaches Forky about his role, is deflecting, unwilling to face up to the changes in his own life now that Andy has grown up and Bonnie favours other toys.

Despite the new characters, and Woody’s deepening philosophical ponderings, the star is really ass-kicking Bo Peep (Annie Potts), who has escaped the shop with her sheep. By the time she and Woody are reunited she’s been a lost toy for years, and has learnt to revel in her freedoms, newfound abilities and purpose.

There’s an enjoyably creepy atmosphere to much that goes on in the shop. Gabby Gabby, wheeled about the aisles in a pram, wants to remove Woody’s voicebox and have it for herself as hers has always been broken. Disarmingly upfront about her intentions, her blatant assumption that she will get it, and her actions, are frankly horrific. Her henchmen, ventriloquist dummies which rush around with lolling heads and twisted bodies, will make most people shudder.

The new characters certainly make their presence felt, though none has enough screen time to entirely steal the show. Caboom is hilarious, and you’ll all be shouting “YES I CANada!” whenever you’re asked to do something. Ducky and Bunny are a terrific double act, caring towards each other but also brutally funny. Forky is simply adorable, and I now feel guilty about all the dodgy craft projects my children have presented me with over the years which I have then surreptitiously thrown away (if it can’t be blu-tacked to the fridge it has to go, is my motto).

As Woody rushes around looking for Forky, who then gets separated again, requiring yet another rescue, and then another, it does feel repetitive. “Not again!” my 9 year old sighed, more than once. Still, small niggles aside, this ending to the long-running franchise could hardly have been bettered. Hugely engrossing, it’s perfectly paced and never outstays its welcome. The characterisation, even for toys only in a few scenes, is pin-sharp – and the scope and scale of the animation is breathtaking.

Bo Peep has a lustre on her skin and hair I can only dream of, even after liberal applications of luminous creams and a lifetime’s frustration over YouTube make-up tutorials. In what looks like a feline recreation of Anaconda, a small toy is swallowed then vomited back up, covered in clear goo. The shop (called Second Chances, a perfect subtitle for the film itself) is crammed with mismatched knick-knacks, pictures, toys, and furniture. The travelling carnival, where Bonnie’s family park up for the night, is an adventure playground of colour, sparkle and, well, plush fluff. When Forky puts his little red pipe cleaner hand on Gabby Gabby’s in a gesture of friendship, every fibre is visible.

The voice cast is superb, with Hanks, Hendricks, Hale and Reeves particularly good. Considering some of the creepy earlier scenes involving Gabby Gabby, Hendricks squeezes every drop of sympathy we might have for the doll who will do anything for the chance to be loved by a child.

Toy Story 4 does feel aimed as much at adults as children, rather than a kids’ film with some wry humour thrown in for their parents. Though the ideas are presented in ways that are understandable for all ages, and it’s not as if children don’t wonder about this stuff, even when very young.

It’s an emotional ending, with the toys working out for themselves what the next stage in their lives should be. I shed a tear, and I regularly chuck old broken toys in the bin without a second thought (admittedly often as an act of revenge when it comes to Lego).

Yet even I, coming out of Toy Story 4, could only say “Whoa!”

NOTE: there are a few mid-credits scenes. There’s also a final scene right at the very end, after ALL the credits, involving Duke Caboom and the Pixar animated logo. Stick around for it if you can.

Check out film clips and the final trailer below: