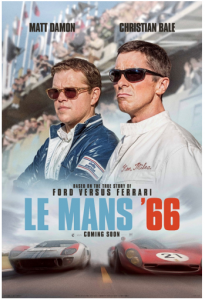 For a film set in California and France, Le Mans ’66 is very British. Its hero hails from Birmingham, he drinks gallons of tea, and his gentlemanly behaviour risks snatching defeat from the jaws of victory. And that’s before we even get to the first Le Mans lap where he’s holding on to the car door as it won’t shut properly.

This is a breathtaking movie that feels epic, from the huge stakes within an artificial world to the deeply human reasons – sometimes the perfect lap, sometimes jealousy or animosity – which drive different people in the story.

It’s also a great advert for coming late to your dreams when life has got in the way; Miles is in his mid-40s, initially held back from motor racing because he was fighting in World War Two.

Ken Miles (Christian Bale), racing driver extraordinare, is in trouble. His garage business has been sealed by the IRS, leaving his wife Mollie (an excellent Caitriona Balfe) worrying whether they’re going to lose their home.

His idiosyncrasies and refusal to suffer fools means most car companies won’t touch him to race for them (I was on his side and I often found him annoying). He is, as one puts it to Shelby (Matt Damon), trouble.

Still, though Miles is different to other racing drivers he’s never slapdash. His life is a search for that perfect lap. You get the sense that it drives him but despite everything doesn’t define him.

Henry Ford II (Tracy Letts), a man forever in the shadow of his father, wants to do something big and bold and demands his workers come up with ideas (on pain of sacking). Ford vice-president Lee Iacocca (Jon Bernthal), told that he’s presided over “the worst sales slump in US history”, suggests they try to buy Ferrari – which is struggling financially but hugely successful in the Le Mans 24 hour race – and use the prestige of purchased racing success to give Ford’s own sales a boost.

Later, Shelby warns Iacocca about that approach: “you can’t buy a win Lee, but maybe you could buy the guy who gets you a shot”.

Back in California, their Ferrari-owning dreams in tatters after they’re bested by Fiat, Ford plans its own racing car, the GT40, with Shelby brought in to make this new corporate dream a reality. He wants Miles to not only help him develop the car but also drive it at Le Mans – but Miles is too different to fit with what Henry Ford, and his executive Leo Beebe (a terrifically clammy and contemptuous Josh Lucas), feel is the Ford way.

Ford comes across as a corporate behemoth that despite Henry Ford II’s involvement has lost its way when it comes to why car people want to race. The photo opportunity is king, unlike the European car companies which have an authenticity that defines their obsession with building and racing a supercar.

Were it not for Ken I wouldn’t have wanted Ford to win, but life isn’t black and white and Le Mans ’66 reflects the nuance and compromise of the story it’s based on.

Bale’s portrayal of Miles is impressive and uncanny. I didn’t do any research into Ken, his looks or his mannerisms, until after seeing the film and the likeness is unnerving: the accent, the talking out of the side of his mouth, the constant animation in his face.

Outside of the constrictions of the driver’s seat Bale’s body bends this way and that as Miles unwinds, one kind of freedom contrasting with that which he feels in the car. You can see why he needs all those calming cups of tea.

Careering round the racetrack, he talks out loud, an ongoing one-sided conversation with other competitors as he berates them for the mistakes or over-caution that will let him through. I don’t know if the real Miles did that, but it’s a godsend if, like me, you have no knowledge of car racing tactics (or indeed cars).

Unsurprisingly considering when this is set, it’s a very male-centred film, though the deft depiction of Mollie Miles means that what could have been a typical 1960s movie wife role – there simply to reflect the qualities of the men – is much more rounded. Mollie is as much of a car nut as he is; their one big argument takes place with her at the wheel, swerving in and out of oncoming traffic after he’s promised to put aside his racing dreams for the sake of their family then done the opposite. It looks like a marriage of equals.

The  mid-60s setting feels on the cusp of the past and modernity; the photos and chatter about the Second World War show how close those events were (there were only 21 years between the end of the war and the Le Mans race of the title – and when you get to my age, two decades is nothing in terms of memories of world events). It’s an interesting time, when from this distance we’re more used to ’60s stories about the space race, the Kennedys, or high school teenagers.

In the US the film is known as Ford v Ferrari, in Europe Le Mans ’66; and I’ll admit I’ve been moaning about the European name change for ages. But having seen it, Ford v Ferrari is not an apposite title – apart from the big race, the film’s battles aren’t about Ford v Ferrari, and though Ferrari’s enthusiasm for racing for the sake of racing seems alien to the Ford top brass, that’s not really explored.

Most of the film is taken up with the fighting, often underhand, between different factions within Ford and its racing car development programme (much more exciting than it sounds, trust me). Ford v Ford v Ferrari might be more accurate, as internal fights threaten to destroy dreams big and small – with Miles of course always set up to be the fall guy.

Regardless of its title – let’s just go with Ford v Le Mans ’66 – James Mangold has delivered a bona fide crowd pleaser. The racing is exhilarating, the sheer length of the big races pushing tension to breaking point. This is large-scale traditional storytelling: assured filmmaking that blends thrilling action and nuanced character study, with a great big dollop of emotion.

More motor racing films: read my reviews of Blink Of An Eye, about Michael Waltrip’s Daytona 500 win the day his mentor and friend Dale Earnhardt Snr died, and Rapid Response, on the development of motor racing safety in the US from the 1960s onwards.

Watch the Le Mans ’66 trailer now (and scroll down for more images):