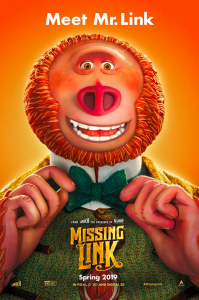 “These are dark days. Electricity. Suffrage. Evolution!” So says Lord Piggot-Dunceby, head of the Optimates Club – a London home-from-home for posh, white, male 19th century explorers (is that description tautological?)

It’s a club which wealthy explorer Sir Lionel Frost (Hugh Jackman) is desperate to join, though Piggot-Dunceby has no intention of allowing anyone who believes we’re descended from the Great Apes to become a member. (Jackman is very good, though I’m disappointed that they used an Australian to play Sir Lionel, thereby depriving a posh middle-aged British actor, perhaps from a famous thespian family, of more work.)

The story within Missing Link isn’t particularly new, not that it matters. As its messages for children – about the evolution (sorry) of what family means, and who we are –  are important ones. And those messages are delivered with such verve, wit and gorgeousness that any quibbling feels rather mean.

For Frost, an explorer who has yet to discover the true meaning of friendship, and the sasquatch he tracks down, it’s about finding your people, who may not be the most obvious candidates.

Their fellow explorer Adelina Fortnight (Zoe Saldana) doesn’t have to learn anything because she’s already a kind, brave, identity-accepting sharpshooter who can fashion her own rock-solid updo.

From the Loch Ness Monster to that sasquatch, Lionel is particularly successful at finding mythical creatures. He’s less good at bringing home the accompanying requested evidence.

After an altercation with Nessie – resulting in the resignation of his assistant Lemuel Lint (David Walliams), and the destruction of a camera holding some incredible images of the solitary dinosaur – Frost needs a new plan. And it comes via a letter he receives about (and it turns out, from) the mythical sasquatch, said to reside in the Pacific North West of America.

Lionel (Hugh Jackman) suggests to the Optimates Club’s sceptical members that if he brings back evidence of the creature’s existence, then they should allow him to join the club. Lionel’s word may be his bond, but the evil and backward-looking lord holds himself to no such rules, and despite agreeing to the wager, sends a thug (Timothy Olyphant) to follow and kill Frost.

Frost finds the sasquatch easily in the forest. Incredibly the creature speaks excellent English, though he’s very literal. Mr Link, as Lionel christens him, is desperately lonely and wants the world-famous explorer to help him move continents and find the Yeti, his chillier cousins.

Specifically, Mr Link (Zach Galifianakis) wants Frost to help him because Lionel is “someone who believes in my existence but doesn’t want to shoot me”.

It’s a long journey, and they need a map, luckily supplied by the forthright Adelina (Zoe Saldana), widow of a fellow explorer who believed the yeti to be living in solitude in Shangri-La. All the while the little group are pursued by Stenk, the murderous mercenary sent by Piggot-Dunceby (Stephen Fry) to stop Lionel returning with evidence of the sasquatch. (Their first altercation is in a bar, and it’s honestly the most fun I’ve had watching a fight since John Wick had to face off a dozen black-clad assassins in his pristine white house. Like John, the hairy creature also goes by many names: sasquatch, yeti, Mr Link, Susan).

Filmed in stop-motion, there’s a depth to the textures on Mr Link’s fur, the wide choppy sea, and the cluttered detail of Lionel’s study. This is a beautiful film: the colour is incredibly rich without being garish, from the first scenes up in Scotland with its mauve loch, the sky and hills shades of purple and pink. The Optimates Club is dark and sinister; the passenger liner’s corridors, along which Stenk chases them, darkly golden. Those forests, the home of  Mr Link, are a painting of stunning green and blue foliage and angular grey-blue boulders.

Character-wise, Mr Link himself is also delightfully well-drawn. Sweet and naive, though aware of the extremes of human nature, those traits fit perfectly with his wide open face. He’s big and accidentally blundering, but he’s also rather fastidious in his movements.

While much of the humour comes from his literal acceptance of Frost’s figures of speech (asked by Lionel to throw a rope over a high wall, he literally chucks over the entire coil, and then does it again with another one) I loved some of the extra details. The newspaper headlines, from which Mr Link has learned so much about the explorer, provide a perfect back-story for your average independently wealthy adventurer, from his derring-do to his escapades with a Russian ballerina.

The three travellers do make it to the Himalayas, and the yeti’s hidden home of lush green valleys and towering glass peaks. Though the yeti turn out to be far from interested in their “country cousin” – the society’s Elder (Emma Thompson) is both unwelcoming and unwilling to let them leave. Thompson is terrifically sneery, and resembles an Afghan hound caught in a snowstorm. Her character’s pithy comments about what other people (people like Sir Lionel) have named them and what they call themselves apply equally to Mr Link himself.

This is a joyous film, beautiful and genuinely funny for all ages. I took my 7 and 9 year old boys, and all us us were laughing throughout.

The cheeriness and good nature of Mr Link, combined with the transformative effect friendship has on him and Lionel during their travels, make this a wonderful family treat with messages that are charmingly delivered.

Cast and director interviews, film clips, a featurette and images from the animation design process – check them out now.