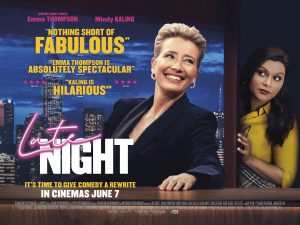 When late night chat show host Katherine Newbury is told she’s being replaced, she finally has to face her writers’ room. Literally, as most of the men in there have never even seen her in the flesh before.

Those men are all white, and privileged, though not as hirsute as I was expecting. They’re lazy, and not that funny, so I think this is one time Katherine, in many ways a bad workman, is entitled to blame her tools.

She’s ignored her show’s problems and her staff for a decade, and is dismissive about the kind of entertainment modern audiences want. Even her adored husband Walter (a quietly scene-stealing John Lithgow), himself a TV virtuoso, doesn’t bother trying to guide her any more as he knows she won’t listen.

Katherine (Emma Thompson) doesn’t suffer anyone gladly, fool or not. Though I warmed to her when she fired a man asking for a pay rise on the basis that he had a new baby. (I’m with all those women who’ve ever been fired for simply being pregnant with a new baby.)

Despite appearing to be a feminist, and raving about the women she has on her show, she doesn’t want to work with any. Still, her current predicament demands new ways of working, so she orders her assistant Brad (Denis O’Hare) to hire a woman writer.

Step forward – and then, after being bashed in the face by a bin bag, step forward again – Molly Patel (Mindy Kaling), who works in a Pennsylvania chemical plant but wants to be a comedy writer. Molly gets the job because during her terrible interview, Katherine calls up Brad wanting confirmation that he’s hired a woman. Tellingly, when Brad asks Molly how she even heard about the role in order to apply, her complicated answer highlights how many jobs are only advertised within a tiny and privileged circle. Of course as a woman with brown skin, she’s still known, to that tiny and privileged circle, as the diversity hire.

Written by Kaling, directed by Nisha Ganatra and bought by Amazon Studios for a whopping $13 million after premiering at Sundance in January, Late Night boasts vibrant performances from its two leads. Often funny and sometimes sharp, it’s still not quite as funny or as sharp as I was expecting. This is a film I’d been looking forward to: a woman-centred comedy with great outfits and menopause jokes? Count me in! So maybe it could never live up to expectations to be both perfect and take us forward in leaps and bounds.

At times it quietly drills through tired arguments we’ve heard for years: privileged proponents of the status quo often say that in making a workforce more diverse, companies are taking on people who don’t have the experience required. Yet Molly, fresh from her job as an efficiency expert, is perfectly able to analyse Katherine’s chat show. Unfortunately it often steps back from the brink of really calling out privilege; I wanted it to go in harder than it did.

Katherine is taking a last ditch interest in the writing process for her show, though instead of learning names she numbers her writers from 1 to 8. Her show is boring and she’s supercilious about the new era of social media-generated entertainment. When she’s persuaded to have YouTube dog video sensation Mimi on the show, she’s rude and condescending. Mimi’s not stupid, telling Katherine that “the best comedy comes from truth” (the one type of comedy Katherine wants to avoid).

It’s Molly who persuades Katherine that she needs to let her audience see something of herself, and what she believes in, in order to turnaround the show before it’s too late.

There are some terrific jokes in Late Night, but they’re not the ones put to Katherine’s audience. The fresh material designed to save Katherine’s job – jokes about her age, Planned Parenthood and the menopause – don’t work. Not because those issues shouldn’t be joked about (I have a joke about the menopause! Oh wait I’ve forgotten the punchline) but because the jokes about them in Late Night aren’t good enough for a top chat show.

The turnaround is presented half-heartedly. There’s a white savour skit where Katherine mocks her own privilege, a segment set up as if it’s going to be a major part of her newfound success; but it appears once and it’s not clear what happens afterwards. In fact we don’t hear that much about the changes. I’m not saying I wanted a PowerPoint presentation on viewer numbers; but with no timeline, and no indication of whether they’ve really turned the situation around, it’s hard to know who is being unreasonable when we get to showdown time between Katherine and her boss.

Molly’s acceptance into the writers’ fold comes with some ups and downs (including a key joke signalling a change in direction for Katherine’s comedy that at the last minute isn’t used), but Late Night is short on conflict. The men in the writers’ room quickly warm to Molly, encouraging her out from under a desk where she’s hiding, and giving her advice. Even the most privileged of all, chief monologue writer Tom (Reid Scott), soon softens.

Thompson is clearly having a ball. She’s superb, making us root for a woman who is set in her ways, bullish and not that likeable (and what’s worse for a woman than not being likeable?) Katherine has a relaxed insouciance behind her stage desk, even as her work and personal lives are imploding, so watching her internal battle when asked to be complicit in her own humiliation regarding her (dreadful) replacement is devastating (especially if you’re my age). Problems in her personal life show her to be of her generation: imperfect but private.

She’s matched by a hilarious performance from Kaling: Molly is warm but blunt, frustrated by the easy routes to success of the men around her, and the ease with which they ignore their own leg-ups while labelling her a diversity hire. The methods Molly uses to get ahead (and stay there) are completely believable.

And shout out to costume designer Mitchell Travers. Katherine’s outfits are fabulous: strong and colourful, elegant and funky, whether TV show jackets, evening jumpsuits or (yes!) a stripy knitted tank-top. Molly’s is understandably (and realistically) workaday, with a couple of stunning dresses (a blue and white belted midi and a floral “going out” dress). I can’t remember what the men were wearing – hopefully hair shirts.