If you’re a struggling writer, don’t google what Jo March’s $20 payment for her short story, offered by a publisher who thinks all literary heroines should end up married or dead, works out as in today’s money. You’ll only start crying, and as an author you need to save those tears for Beth dying, I mean Amy setting fire to Jo’s writings in a fit of jealousy. 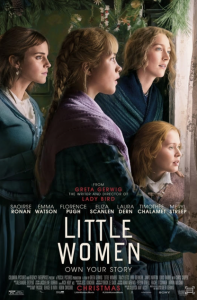 Greta Gerwig, who wrote the screenplay and directs this latest adaptation of Louisa May Alcott’s semi-autobiographical 19th century novel, has created two timelines – a trick which throws into stark relief the barriers and realities that threaten to stifle the March sisters’ dreams as they grow into adulthood.

One has the girls as children, their once-wealthy father away working as a chaplain during the American civil war; and one (where the film actually starts) with them as adults. In this timeline, Jo (Saoirse Ronan) is working as a governess and living in a New York boarding house; homely Meg (Emma Watson) is married to tutor John Brooke and has two small children; Beth, never fully recovered from childhood scarlet fever, is at home with Marmee (Laura Dern); and the impulsive and fancy-loving Amy (Florence Pugh) is in Paris with Aunt March (Meryl Streep), working on her painting and her socialising. She’s interrupted by a visit from Laurie, his marriage proposal to Jo recently refused and his humiliation twisting into bitterness.

These timelines mean that if you’re not familiar with the story it can be hard to follow at first. At one point I was reduced to hair length and bloomer visibility to work out where we, and they, were.

The actresses are the same throughout, and while Eliza Scanlen looks easily young enough to play Beth (13, if Gerwig is sticking to their ages in the book), and Emma Watson is believable as 16 year old Meg, both the elegant Ronan, and Pugh (an otherwise superb Amy), bouncing around in plaits and petulance, look too old.

If you can put those elements to one side though, the sparky editing comes into its own, moving the girls from one timeline to another with seamless wit. And while the film didn’t resonate with me, Gerwig has built a cast that delivers the social and economic truths about women, marriage and work with verve, wit and passion.

I haven’t read the whole book. Growing up it wasn’t particularly on my radar, and coming to it now I’m finding it rather a slog (I’ll continue with it of course, as an unfinished book induces more silent shame than any amount of truly bad behaviour). At 48 I’m past the coming-of-age stage though, so maybe it just isn’t for me – there isn’t much of a story, and its power clearly rests in its messages to teenage girls and young women about independence, following your own path, and holding onto your identity.

Gerwig is adept at getting that message across – Jo is tenacious in holding on to ownership of her own writings – with passion, humour and a knowing nod to our current times. The zingy ending is particularly good (if open to interpretation!), as Jo’s characters and her own life converge and separate.

There’s a lot to love here, even though I personally didn’t love it. It looks gorgeous, though the elements that work best are those that transcend their time – whether it’s the siblings’ sometimes vicious squabbles, which as one of three sisters I found myself silently refereeing during the film, or the issues facing young women, particularly Jo’s fight against the idea that stories by and about women have little value and must follow a template devised by men. Marmee too, seems to have lost her piousness, and feels more real and flawed (though I imagine many writers watching will still be seething at her insistence that Jo forgive Amy for burning her sister’s book).

Saoirse Ronan is a brilliant Jo, fiery and single-minded, often unable to see that other women may want different things to her. Jo’s clear-sighted understanding of the economics of a woman’s life is entertainingly rammed home. Ronan delivers her dialogue with forthright exhilaration, lines that are both personal and universal. I loved Jo’s comment that “Amy always had a talent for getting out of the hard parts of life” – doesn’t every family have a sibling like that?

Even more impressive than Ronan (it’s a crowded field, the Little Women best actress category!) is Florence Pugh as Amy. Despite the issues with her age, she is magnificent as a girl desperate to be noticed while drowning in a sea of sisters. Her petulance, pride and impulsiveness are always on display, her every emotion and repentance played out in public. She’d be a hoot on Twitter if she was around today, constantly putting her foot in it then earnestly promising to learn and grow in full view of everyone else.

She also provides a truly realistic view of the red hot cruelty siblings can subject each other to, even if (because?) they love each other dearly.

Eliza Scanlen, as the sickly Beth who comes to terms with how her life will be cut short well before anyone else admits it, has a knowing stillness and stoicism while everyone else rushes around. Emma Watson doesn’t have as much to work with when it comes to Meg, though she highlights the tension Meg feels between her dreams of maternal domesticity and her longing for fun and frivolity – the domestic one always in the background, her work unnoticed.

The men, apart from Laurie’s grandad, are realistically, averagely thoughtless. Publisher Mr Dashwood (Tracy Letts), always determined to pay women less than men, and his opposite, the warm-hearted old Mr Laurence (Chris Cooper), are deftly drawn (there’s a hilarious snippet of an argument between Dashwood and his wife near the end of the film).

Laurie himself (Timothée Chalamet, a decent actor whose skyrocketing appeal baffles me, as it no doubt should) is dismissive of Meg’s desire to borrow a pretty dress for a party, never thinking that she’s simply sick of being the poor relation at society events and for one night wishes to be the belle of the ball. Later, turned down by Jo, his reactions – annoyed, rude and self-centred – are not generally permitted to women who don’t get their own way. Professor Bhaer (Louis Garrel), whom Jo meets in New York, is scathing about her stories, when she has to write what publishers will buy so she can support her family.

I did feel for poor Amy, marrying Laurie while he’s on the rebound. The sparkiest, most real, and most likeable of the March girls looks to be setting herself up for a lifetime of marriage to someone who will always hold the upper hand because he doesn’t really love her. I wished she’d married rich young Fred instead, and enjoyed a life of trinkets, painting and fine frocks, without always wondering if her husband still fancied her sister.

Like many movies the story’s conclusion is about ending up with your beloved, and here Gerwig leaves us with something that is 50 Shades for literary types. It’s even red! True love indeed.