You are here: Home / Film Reviews / Once Upon A Time In… Hollywood 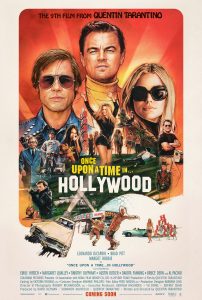 Warning: spoilers ahead, so no moaning please (unless of the art film kind)

It’s been called a love letter to Hollywood, though with that title, Tarantino’s ninth movie also plays into our – and Hollywood’s –  love of re-booted fairy stories that have lost their original callous brutality and now finish with everyone living happily ever after.

Once Upon A Time is long at two hours 40 minutes. It’s not a sprawl – if anything it’s determinedly measured in its approach, and in its ending, which feels both fearless and reckless (and very male).

I didn’t come out wishing I’d taken a picnic (though I was certainly craving cigarettes and a pedicure). But it could have been trimmed by removing some of washed-up actor Rick Dalton’s on-set scenes, which go on for so long as he faces up to the desiccated fragments of his career that any sympathy I had was replaced by irritation at the self-indulgence of a director filming the self-indulgence of a character.

Granted, some of Dalton’s work-related antics are hilarious: his flashback flamethrower attack on Nazis as he screams “anybody order fried sauerkraut!”; his down-time chat with the precocious child actress Trudi (Julia Butters); and his trailer freakout after he’s screwed up his scenes are all glorious in different ways.

And despite the indulgences, DiCaprio is superb as Dalton, fidgety and fussing as he first tries to distract himself from what his brain is telling him, then – after realisation hits – succumbing to self-pity.

A decade on from his starring role in TV show Bounty Law, Dalton is reduced to taking guest villain spots on other people’s shows, convincing himself he’s still somebody. He’s never made it to proper movie stardom despite headlining The 14 Fists Of McClusky (the one with the Nazis and the flame-thrower), which matches Throwdown At Bitch River, vehicle for Jeremy Irons’ hammy Atticus in An Actor Prepares, for best “invented yet could be real” film title.

Dalton’s dinner with film producer Marvin Schwarz (Al Pacino), pointing out that his current roles mean that soon the public will only see him as a loser of fights, is rather moving, Dalton speaking with the trace of a stutter as his bluster fails and he sees what he’s become.

Dalton lives on Cielo Drive, and when Roman Polanski and Sharon Tate move in next door it feels like this could be an opportunity for him to befriend the right people.

His relationship with his stuntman Cliff Booth (Brad Pitt) is, we’re told via voiceover later in the film, “More than a brother and a little less than a wife”. Booth drives Dalton everywhere and fixes his TV aerial. He’s incredibly handsome, nonchalant, resigned to his star rising and falling in line with Dalton’s but always on a lower trajectory. Funny and thoughtful, he refuses to have sex with hitchhiker Pussycat (a brilliantly forward and capricious Margaret Qualley) before returning her to the Spahn Movie Ranch where she lives with the Manson Family.

Which makes it all the more shocking when we find out this genial, responsible man, who spends an age checking on the octogenarian Spahn to make sure he’s not being exploited by his guests, killed his own wife and got away with it.

Hollywood is a cruel mistress, and Tarantino, on her behalf, moves between needling and sticking the boot in regularly. Poor Dalton, forced to relive those huge roles he almost got (though I doubt we’d be rewatching The Great Escape every Christmas if Steve McQueen had stepped aside).

On August 8, 1969, the night Sharon Tate and her friends were murdered in real life, Manson Family members break into Dalton’s home armed with knives and a gun, as retribution for Dalton and other Hollywood players introducing them to violence via their screens. Booth kills two of them in the house, Dalton a third in the pool. The deaths are hugely violent, and played for laughs and moral righteousness. (I laughed too, until the pool.) We’re cheering on a man saving the sweet and kind Sharon Tate next door, who doesn’t even know she’s in danger, and he’s doing it by smashing the face of a young woman into an oven door. And he killed his wife and got away with it.

This year I’ve seen three movies featuring Tate: this, The Haunting of Sharon Tate, and Charlie Says; I also watched the fevered Valley of the Dolls, which Tate starred in. Despite their varying quality, all bring out her sweetness and kindness.

Tate is the kind of woman men love, and like to keep silent, while imagining they alone could have saved her. Margot Robbie is exceptional in the role, despite the film’s paternalist gaze. She dances and laughs, but by far and away the most delightful scenes are in a cinema, watching herself in The Wrecking Crew. Sitting in the dark in her huge glasses, she’s delighted at her performance and shyly thrilled at the audience’s enjoyment.

Tarantino seems to love her, and does save her. Eight-months-pregnant Tate, living next door to Dalton, survives the night unharmed, as do her friends. It’s audacious and adoring, quite nuts and slightly sinister; but I can’t complain as every time I read a biography of Anne Boleyn I catch myself hoping that this time there will be a last minute reprieve from Henry VIII.

All storytelling changes history though not quite like this (though Tarantino has form). His rewriting of the past raises so many questions – the immediate ones being over Polanski’s future, which in turn should make us ask what we expect of women. And it saves sweet Sharon and her baby with extreme violence by men against women.

Once Upon A Time is gorgeous, funny and sometimes hilarious, though it can be uncomfortably so. Shadows of “real” Hollywood are everywhere. There’s a lot going on, so much so I nearly forgot about Tarantino’s weird obsession with women snoring.

Despite its sun-soaked, ’60s vibe, it doesn’t feel like the end of an era, the positivity of the decade turned on its head (something Charlie Says does very well). There are so many Daltons hovering around the fringes of stardom, refusing to let the tarnished dream die as a couple of good breaks and a bit of money shield them from their lack of real talent. In a way this film is not ’60s specific.

Both Dalton and Booth are redeemed by their actions that night, and Tate is rescued. There’s even a cute dog that helps save the day! Hollywood always wins.

Watch the Once Upon A Time In … Hollywood trailer:

Once Upon A Time… In Hollywood: in-movie posters