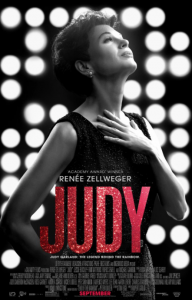 Despite Judy Garland’s far-too-early death at the age of 47, there’s a sense in Judy that by then her life had come full circle, and not in a good way.

Interweaving her five-week engagement at the Talk Of The Town club in London a few months before her death with her teenage years in Hollywood, it shows the never-ending cycle of abuse and exploitation she was caught up in.

The drugs are the same, as are the characters cajoling, bullying and flattering her into submission: a creepy Louis B Meyer when she was 17 years old and starring in The Wizard Of Oz becomes the headmaster-like impresario Bernard Delfont when she gets to London.

Her helmet haired mother, regimenting her working life and forcing pills on her so she could work longer hours, becomes the young and steely Rosalyn (Jessie Buckley), looking after Judy during those final dates and with her own rock solid up-do. (For looking after, read getting her on stage even when Garland is a mess.)

As a teen Garland was in love with Mickey Rooney; he told her he didn’t want to date her. As a 40-something she’s in a relationship with the much younger Mickey Deans (Finn Whittrock), who agrees to marry her but clearly doesn’t want to.

And even though she started performing as a toddler and never had a real childhood, she still takes her two young children on stage in the US to perform with her.

These parallels add a symmetry to the film and to her life, like she’s finally being given back some structure, the emerging patterns showing how she was used by the show business machine.  It feels like this film is an apology to Judy Garland, for what the system did to her.

It’s a sad story, one that has stayed with me since watching it yesterday (something that rarely happens – usually I weep buckets in the cinema before drying my eyes and stomping out with my own Rosalyn-like briskness). The sadness is overwhelming the more one thinks about Judy’s life, and while overall I found Judy rather flat and pedestrian, I’m not sure I could have coped with much more.

It’s a tale of exploitation and a lost childhood, and 45 years (Garland first went on stage at 2) of looking over her shoulder at the other girls she was told were after what she had. Garland spent decades taking pills to stay awake and pills to sleep, drinking to excess and eating a little as possible. Extravagant cakes were for birthday photoshoots, sliced but never eaten.

When we first meet Judy she is – in her words – “unreliable and uninsurable”. Evicted from their hotel suite due to non-payment, she’s forced to take her two youngest children to their father, her ex-husband Sid Luft.

The London dates, offered to her by impresario Bernard Delfont (Michael Gambon) are her only way to make some money.

It’s uncomfortable to watch, as she (eventually) takes to the stage in London. She’s dependent on the audience for its reactions and we never know whether this is the night they’ll turn; Judy can’t rely on her own magnetism to bring them round any longer. One day she’s a torch singer, the next she’s being pelted with bread rolls, and Zellweger expertly highlights Judy’s vulnerability even in the place she should be most magnetic and unbreakable.

After years on pills she can barely sleep, lying tossing and turning in a peach silk slip, clutching pillows. At performance time she’s as likely to be found by Rosalyn nursing a drink or hiding in her hotel room.

The happiest we see her is when she temporarily befriends a warm and loving middle-aged gay couple, Dan (Andy Nyman) and Stan (Daniel Cerqueira). Huge fans of hers, they’ve bought tickets for every night of her London run. The three of them end up back at their flat, cooking her dinner and playing cards. It’s a link with what Judy meant to her gay fans, how her struggles meant she understood their own. It’s a moving interlude, but while they’re friendly and real they’re also slightly starstruck, in their home dotted with Garland memorabilia – Frances Gumm, as she was born, is still ultimately alone.

Zellweger is superb: self-destructive yet self-aware, her eyes all-knowing. When she takes the stage her voice veers between authentically spine-tingling and heartbreakingly croaky. It’s a performance that hangs around after watching: the sadness, the waste, the abuse and the inexorable nature of her destruction. (There were also moments when, as her eyes crinkled into a bravura smile, I glimpsed Bridget Jones 20 years on if her life had gone horribly wrong.)

Jessie Buckley is enjoyably brisk and no-nonsense as Rosalyn, rising panic kept out of sight (“You’ll be fine. On you go!” she tells the legend on Judy’s first night after literally helping her into her dress). Gambon is barely in it, only appearing to be the school headmaster when Judy has misbehaved.

The script (written by Tom Edge, based on Peter Quilter’s stage play End Of The Rainbow) positions Judy as deeply troubled but still with a piercing awareness of what she has become and how. “London just slaps on another coat of paint” she says, when talking about her love for the city compared to others which are all about newness. The scenes of her as a teen (winningly played by Darci Shaw) show her pushing back as much as she can, claiming small victories along the way and taking the threats that arrive by return.

And if you want a lesson on 40+ dressing, check out Judy’s stage costumes. They’re stunning and cool, from her jacquard trouser suits in russet and gold to her gorgeous blue wedding dress with matching pillbox hat when she marries Mickey. If anyone knew about putting on a show, sparkle and song hiding the broken heart, it was Judy Garland.

The film’s uncompromising commitment to showing how Judy was forced into addiction is commendable; watching Judy I’m surprised the star survived as long as she did. There are hints too about adulation, her savour and her solace, also being a drug; and how much it must damage her when she can no longer automatically command it.

We move through the days and weeks briskly and at times it’s run-of-the-mill, a by-numbers trot through the worst of times. These highs and lows make for an uneven film.

The ending is low key, a reminder that triumphs come in many shapes and sizes.

Watch the trailer for Judy now: