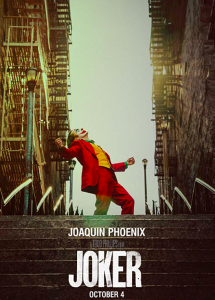 Gritty and grubby, garish and loud, violent and depressing, Joker is a blunt instrument of a movie – though it is a good movie.

Joaquin Phoenix, as Batman’s future nemesis, is superb, his downward spiral inverted into an ascent to antihero status as Gotham seethes and then explodes.

Joker has already got its own discourse. And ironically the question currently being asked of the film is similar to one being asked in the film: is Arthur Fleck, by killing those he feels have wronged him, the cause of Gotham’s eventual explosion into riots and anarchy, or is he a symptom of it, as infected as everyone else? Is he creating, reacting, or a bit of both? (You could also ask the same of the discourse.)

Gotham is a crime and grime filled cesspit, febrile and angry. The rich, led by Thomas Wayne, Bruce’s father, are simultaneously starving the poor of support and lecturing them on how to succeed.

Joker is holding up a mirror to New York in the early 1980s, and there are plenty of parallels between then and now: an increasingly polarised society; a widening gulf between rich and poor; the rich trying (and managing) to link their success with virtue rather than luck or exploitation.

In other ways it’s a precursor to trends in society that have got significantly stronger: the treatment of celebrity for its own sake and the celebration of the antihero; and exploitation by people on both “sides” (usually the most downtrodden aren’t the ones rioting in the streets as they’re too busy trying to keep their families safe).

Arthur Fleck, newly released from hospital, is on seven different types of medication. His most obvious symptom, as it’s not occurring in his own head, is involuntary unstoppable laughter. It unnerves people and leaves him choking (Phillips does like his metaphors).

Arthur works as a clown, holding shops signs in the streets, until some kids steal his sign then beat him up. By night he’s trying to make it as a stand up comedian (he’s terrible). In between he cares for his mother Penny (Frances Conroy) in their grotty apartment, and dreams of Sophie (Zazie Beetz), who lives along the hall. After the attack a colleague gives him a gun so he can protect himself.

His job is always on a knife-edge because of his unpredictability, and he’s finally fired after taking the gun into a children’s ward while performing his act. By then his shooting of three drunk posh boys on a subway train, after they mocked then attacked him, has already led to the mysterious “killer clown” becoming the figurehead for the rising anger in Gotham, green-haired clown masks the new disguise of the disenfranchised.

Murder is the making of Arthur, or rather the anonymous infamy it brings is – and he starts honing his new Joker persona, killing again and again.

Phoenix is superb as Arthur flits between miserable reality and successful fantasy land. Arthur’s speech is considerably smoother in his fantasies, though physically his clown alter ego bleeds into the man. Phoenix’s physicality is eye-popping and sometimes horrifying. Escaping along brightly lit institutional corridors having stolen his mum’s medical records, Arthur runs like a cartoon character – overshooting each turn and having to stop with his big clown feet and turn exaggeratedly, where we would slow down before a corner, ready to turn. At home in his baggy white underpants his stomach is concave and, as he bends and stretches, almost creaking. It looks as if his jutting bones are something inside him, trying to get out.

A couple of days ago I finally watched Martin Scorsese’s excellent The King of Comedy. Released in 1983 and a flop at the time, it’s a prescient satire on fame and celebrity. Robert De Niro plays Rupert Pupkin, a delusional stand up. Obsessed with TV comic and host Jerry Langford (Jerry Lewis), and unwilling to put in the graft to hone his craft, he stalks then kidnaps his hero.

King of Comedy is (a) bleakly funny and (b) not really violent, though Pupkin is still an unnerving narcissist and a danger. The film ends with Pupkin achieving huge success as an antihero.

Joker has none of the humour, and little of the nuance of KoC. Though it does have a quietly excellent De Niro playing comic and chat show host, Murray Franklin, a character very like Langford. He isn’t averse to mocking Arthur by playing a video of him dying a death on a comedy club stage, but he’s also sympathetic – later inviting Arthur onto his show not to mock again but to understand – and he remembers where he himself came from.

Where King Of Comedy reflected society and warned us how it might become worse, the argument around this new film is whether it might trigger violence from angry white men who feel ignored, and see a sympathetic portrait of Arthur pushed by the behaviour of others into becoming a killer. Regardless of whether this is likely, if enough people are frightened by the effect of a film on an already polarised and angry society, we should ask why. Even if there’s no direct causal link between films and violence, or art and violence, we can examine whether something might be contributing to an atmosphere which makes people fearful.

That shouldn’t be controversial – balancing safety with free speech, while acknowledging the value of disruptive art. (Whether you consider Joker to be art is another matter. It’s a good film with an excellent central performance, though I doubt it’ll be remembered as a classic – it certainly hasn’t played on my mind since I saw it.)

There are several elements in Joker that feel as if they’ve been chucked in with no thought to the possible result (and it’s a privilege being able to do that).

Mental illness, head trauma, child abuse, life as a carer, masculinity, revenge, and a good dollop of misogyny weave compellingly through Joker – though they can come across as pretence at being thoughtful when actually Phillips is excusing his protagonist. Arthur’s mum is effectively blamed for his condition (it’s always our fault!) even though she was clearly ill and a victim of domestic abuse herself.

Joker is an effective and disturbing chronicle of a man’s collapse, a man who has always existed on the margins. Arthur’s ascent to the role of antihero, figurehead for a movement full of angry young men in clown masks, is terrifying precisely because, despite its setting, it’s believable.

Feel free to comment below (please keep it polite – remember, every time someone’s rude to me about my reviews, John Wick loses another dog)

Watch the Joker trailer now and scroll down for images: