You are here: Home / Film Reviews / Pain And Glory 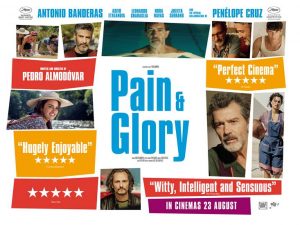 This is definitely a comment rather than a question, but the fictional film director’s Q&A in Pedro Almodóvar’s delicious Pain And Glory is the most glorious I’ve ever seen.

Incapacitated by memories and the drugs he’s taken, 50-something filmmaker Salvador Mallo (a fantastic Antonio Banderas) is tracked down to his kitchen as a cinema full of fans waits expectantly for words from the master on his movie Sabor, re-released after 30 years.

That kitchen is shiny scarlet, in a spacious apartment in Madrid furnished with stunning art, rich velvet sofas and designer chairs.

By contrast there’s a fresh, sunny simplicity to Salvador’s childhood memories that appear throughout the film. Growing up with his mum and dad (though we barely see his father), their home is a whitewashed cave in a village of whitewashed caves. (The local “pious woman” tells them they should be grateful to be living in catacombs like the early Christians.)

Pain And Glory is witty, colourful and gorgeous, a hugely enjoyable watch with a cast of flawed characters who always resonate – connecting with each other and the audience as Salvador struggles with his future while trying not to think about his past.

At first Salvador, a well-known film director and screenwriter, seems to see memories as a drug and wallowing in them as an addiction – indeed when actor and old friend/enemy Alberto Crespo (Asier Etxeandia) finds an autobiographical short story called Addiction on Salvador’s computer and wants to perform it as a one man show, the filmmaker tells him that he wrote it “to forget about the content”. (The film itself is unsurprisingly autobiographical – this interview with Almodóvar from The Guardian, showing how fact and fiction blur, is a terrific read.)

“Without film my life is meaningless” Salvador says, but he’s stopped making them. A back operation a few years ago has jolted him prematurely into old age, and now minor illnesses and ailments have become his only focus. He’s creatively blocked but it’s partly self-created, each new niggle another reason not to make the movie about his past that he’s too scared to make anyway.

Admittedly, his life has to be more measured now. Ageing means tasks which used to be done unthinkingly now require preparation and consideration. For Salvador it’s putting on the loafers that he hates but which don’t require laces to be tied. (We hear about them, but when we see him put them on it’s even worse, as he wields a long shoehorn to make up for the fact that he can no longer bend down.)

Then Alberto offers him heroin, which Salvador has never taken before; soon he’s buying it on the streets and the memories are flooding in.

Salvador, wealthy, and not actually ill, with no family ties left, is able to indulge his pain. But though he’s exasperating he’s never less than interesting, some feat considering his complaints. And even in his desperation to avoid his past he manages to circumvent melancholia.

It’s a bittersweet time of minor indignities and growing invisibility, when some retreat into that past and some try to close it off. Salvador has been doing the latter but it keeps pushing through: past films, past boyfriends, excitement, hope and desire. Everything is leading up to the film about himself that he doesn’t yet want to make but knows he’ll have to.

Young Salvador (Asia Flores) is adorable; a cheerful, sunny-natured boy, excellent at reading and writing. His mother (Penélope Cruz) gets him to teach a local labourer to read and write in return for him fixing up her whitewashed cave kitchen. These are some of the funniest scenes, with little Salvador a hard taskmaster. He clearly gets it from his mum, the driven Jacinta putting as much effort into finding ways to create an acceptable home underground as propelling Salvador off into the world.

Cruz is a joy, a motherly mix of adoring and cross, hemmed in by their poverty but promising him he can escape when he’s older. (Older Jacinta, played by Julieta Serrano as an elderly woman, is great fun and you can see the trail from the younger Jacinta to the older version.)

The older Salvador is dealing with past memories and trying to make amends, though he wants it to be on his terms. Until Salvador turns up at his gate, at the suggestion of their actress friend Zulema, Alberto hasn’t seen him in the decades since he starred in Sabor. That experience had ended on a sour note, with Salvador furious at how Alberto had played the role. Now Sabor is to be re-released for a film festival, and Salvador wants Alberto to come with him to the screening.

Memory and reality merge as Federico (Leonardo Sbaraglia) returns from the past, the old boyfriend whose addictions nearly overwhelmed them. They now look alike (greying hair, neatly clipped beards) but Federico, so self-destructive when they were together, is now enjoying the fruits of growing older, joyfully and fearlessly taking opportunities as they appear.

I always expect filmmakers to want to produce work that is autobiographical in some way (how can art not be?); yet for most of Pain And Glory Salvador doesn’t seem to want to.

All our memories are crafted, deliberately or unconsciously, and Salvador is an arch curator: Jacinta in flashback with young Salvador, as she and her friends wash white sheets in the river then hang them over bushes to dry while singing; Salvador lying under a deep red blanket in a train waiting room en-route to their new village; even the village itself. Still, at least some of his memories are frayed and raw: the trauma of his relationship with Federico, his reminiscences of childhood cinema that smelt of “piss and jasmine”.

Meeting Zulema, an actress friend in a restaurant, he tells her how Sabor is so much better now than when it came out three decades ago, but no: “It’s your eyes that have changed darling” she tells him.