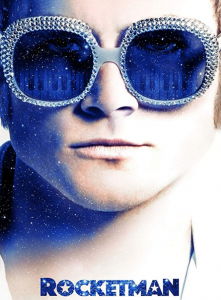 Several times during Rocketman young Reggie Dwight reappears in Elton John’s life, even as the singer-songwriter is trying to escape him, before he realises that little Reggie is the anchor for everything.

Elton’s childhood was often bleak. Yet despite this film’s honest depictions of loneliness, addiction and despair, Rocketman is a joyous and boisterous fantasy grounded in reality and truth.

This is a look back on a life that, despite its highs and lows, has ended up where it should for Elton John: with a happy marriage to David Furnish, children, and friends. (And shopping – Elton still has the shopping, something I particularly applaud.)

From Elton’s exuberant onstage performances dressed as a multicoloured chicken, or Elizabeth I, to “real life” where family, friends and hangers-on break into song, this is a rainbow-hued musical extravaganza – as befits a man whose extravagances have brought us all so much joy (including Elton, if only he’d known when to stop).

Rocketman focuses on three central relationships, all of which endure throughout the period of the film: Elton John and longtime friend and musical collaborator Bernie Taupin; Elton and Reggie, the sweet, shortsighted and unhappy boy he started out as; and Elton and his public.

Around these relationships swirl the destructive influences that almost destroy him, as he searches for love he can easily recognise, even if it isn’t the real thing.

Addiction to drugs, alcohol, food, and shopping nearly cost him everything. His mother and father are both inadequate in their own ways: she wielding a casual uncaring cruelty, he almost sadistically cold, pushing his son away in favour of his new family. And his relationship with John Reid (an enjoyably steely Richard Madden), the brittle and brilliant music manager who took charge of Elton’s career and was also his lover, looks to have been – while financially lucrative thanks to Reid’s business acumen – emotionally one-sided.

Rocketman plays out as a series of flashbacks, as Elton (an exceptional Taron Egerton) strides into an AA meeting in America dressed as a rhinestone-covered orange devil with giant wings, sits down on a plastic chair in the circle and proceeds to tell his story.

I suspect some people will see the metaphor as a little clunky, as we periodically return to the meeting to see Elton gradually losing bits of his costume – shedding the shell he’s built around himself. For me this in-your-face allegory feels entirely fitting. (We’re actually closest to an emotionally naked Elton a few minutes before that AA meeting, in a much later scene. Dressed in this outlandish outfit, he looks in the mirror, for once not wearing any of his trademark glasses. Egerton is completely still and vulnerable, Elton unable to avoid what he’s become any longer.)

Director Dexter Fletcher lays out his stall early on, that this is going to be a warm, honest and audacious take. The decision to label it a “true fantasy” is a masterstroke, offering exceptional scope and leeway to tell the fantastical story.

Taupin’s lyrics, so accessible and elegant as they illuminate universal truths about life and love, and Elton’s gorgeous melodies, from foot-stampers to laments, are used out of sequence to illustrate the story. It’s often funny, with Reggie leading Elton from the AA meeting into the streets of 1950s Pinner, singing and dancing to The Bitch Is Back, the neighbours spinning each other round in gathered skirts and sharp suits.

Growing up, his parents’ misery creates an atmosphere as drab and oppressive as the house itself. Mum Sheila Eileen (Bryce Dallas Howard) takes every opportunity to escape in a pretty dress, contrasting with her son conducting an imaginary orchestra in his bedroom, playing Rocketman. It’s beautiful not just because of the boy’s skill and delight, but because every single musician is beaming back at him.

The exuberant Saturday Night’s Alright For Fighting has Elton bouncing and singing through a fairground, and takes him from childhood to adulthood. He meets lyricist Bernie Taupin (a superb Jamie Bell) via a management company, and their first meeting is like a brilliant first date, as they realise how well they fit together as a writing team. Success takes a while: “you’re a couple of pricks as far as I can tell” declares Dick, their first manager.

Egerton is astounding, embodying Elton so perfectly, nailing his fish-out-of-water mannerisms, that at times I thought they’d intercut footage of the man himself. It was only watching the end credits that I was reminded the two men look very different.

Egerton and Bell have wonderful chemistry; Elton’s relationship with Taupin is beautifully laid out. Bell’s subtle and warm portrayal is never drowned out by Egerton, even as Elton the character is expanding to fill the available limelight. One of the sweetest (and funniest) moments is when an affronted Elton, dressed as a psychedelic chicken, admonishes Taupin backstage that people pay to see not Reg Dwight but “ELTON JOHN!” He rushes off then reappears, crestfallen, gently touching Bernie’s hand and apologising. “I know” replies Bernie reassuringly.

Elton’s mum and dad sometimes feel like caricatures, though Lee Hall’s script tries to give their behaviours some perspective. They’re products of circumstance, as well as being unpleasant or grasping.

Costume designer Julian Day has created a symphony of spangles: highly complex, gorgeous, OTT costumes that are instantly recognisable as Elton classics. Elton’s use of outfits that both demand attention while deflecting it away from Reggie Dwight, the kid the grown man can’t yet accept, is clear.

Both the stage outfits and everyday clothes follow an upward trajectory as Elton becomes successful. White dungarees and a navy and silver starry sweatshirt at the early LA Troubadour gigs are replaced by that glittery blue and silver baseball outfit as he rocks a stadium. Meeting Taupin for the first time in a London café, he’s in an orange and cream shirt with matching tie. Years later he slouches, miserable, in a vivid magenta and gold robe in his LA mansion, a party in full swing outside. (The now-wealthy Taupin’s outfits are understated and often elegant.)

There is none of the whitewashing presented to us in Bohemian Rhapsody. Rocketman never tries to gloss over Elton’s homosexuality, or the difficulties he has admitting to himself that he’s gay; his sexuality is common knowledge among friends and family, yet he marries Renate Blauel in 1984. The collapse of his marriage is marked with Sorry Seems to Be The Hardest Word, though neither Elton nor Renate can bring themselves to sing. (Depictions of his addictions feel more rushed.)

Stick around for the credits, with Day’s reimagined designs next to pictures of Elton in the original costumes. There is also an update on Elton Hercules John himself, who’s finally found out what it is to love and be loved.

Watch Aaron and Elton singing at Cannes, check out clips from the movie and watch a featurette about Rocketman costume designer Julian Day.