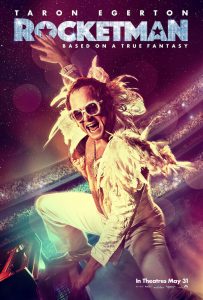 Rocketman has premiered at the Cannes film Festival to great acclaim – it’s released this week in the UK, and on 31 May in the US.

They’re released a few clips to keep us going: check out Taron Egerton singing Saturday Night’s Alright For Fighting and Rocketman from the film.

From Cannes watch Taron and Elton dueting on Rocketman at the after-party, plus Elton and Bernie Taupin discuss their reactions to the film.

Elton and Taron dueting on Rocketman after the Cannes premiere (I may have something in my eye):

From the movie – Taron singing Saturday Night’s Alright For Fighting:

Elton John and Bernie Taupin – their reactions to Rocketman: