Thierry Frémaux, the Festival’s General Delegate, unveiled the 2020’s Official Selection last Wednesday, comprising fifty-six films – they can go into other festivals and cinema runs bearing the Cannes logo. Watch the announcement conversation here (in French with an English language voiceover translation). And it is more of a conversation than a traditional announcement: Here’s… END_OF_DOCUMENT_TOKEN_TO_BE_REPLACED

Festival de Cannes released a statement today acknowledging that their original spring-to-summer postponement idea won’t work, and that it’s hard to see Cannes operating this year in its usual form. They are, though, currently in talks with industry professionals to work out some version of Cannes 2020. Here’s their release in full: “Following the French… END_OF_DOCUMENT_TOKEN_TO_BE_REPLACED

Rocketman has premiered at the Cannes film Festival to great acclaim – it’s released this week in the UK, and on 31 May in the US. They’re released a few clips to keep us going: check out Taron Egerton singing Saturday Night’s Alright For Fighting and Rocketman from the film. From Cannes watch Taron and… END_OF_DOCUMENT_TOKEN_TO_BE_REPLACED

“Like a manifesto, this still photo from the set sums up everything about Agnès Varda: her passion, aplomb, and mischievousness.” Filmmaker Agnès Varda, pioneer of the French new wave movement, died last month aged 90 – and the official poster for this year’s Cannes Film Festival, released today, pays tribute to her. The image is… END_OF_DOCUMENT_TOKEN_TO_BE_REPLACED 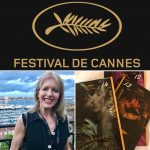 I partied in a medieval turret over the bay. I was serenaded with a traditional song by an actor from Uzbekistan. I got an illegal red carpet selfie. I stood outside the Palais begging for a premiere ticket. I consumed more cheese than a ’70s gameshow addict. Oh and I saw some FILMS. This is… END_OF_DOCUMENT_TOKEN_TO_BE_REPLACED