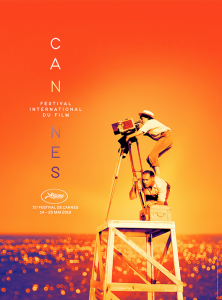 “Like a manifesto, this still photo from the set sums up everything about Agnès Varda: her passion, aplomb, and mischievousness.”

The image is of Varda standing on the shoulders of a technician in 1954, filming La Pointe Courte.

Here’s what the Festival has to say:

“It is August 1954: we are in the Pointe Courte neighbourhood of Sète, in the South of France. In the dazzling summer light, Silvia Monfort and Philippe Noiret explore their fragile love, surrounded by struggling fishermen, bustling women, children at play and roaming cats.

Natural settings, lightweight camera, shoestring budget: with La Pointe Courte, Agnès Varda is paving the way for a young cinema, of which she will remain the only female director.” 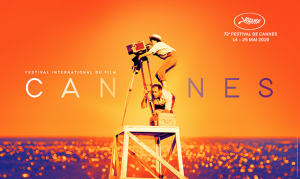 A jury member in 2005, Varda’s films were in the Official Selection at Cannes 13 times. She was also  president of the Caméra d’Or jury in 2013 (the award is for the best first feature chosen from the Cannes selections).

She was awarded the Honorary Palme d’Or in 2015.

I went last year, though from what we’ve heard so far (it looks like Rocketman, Quentin Tarantino’s Once Upon A Time In… Hollywood, and Jim Jarmusch’s The Dead Don’t Die, will premiere there) I’m really wishing I’d saved my money last year and waited. (I wouldn’t have saved the money, I’d have spent it on shoes, dresses and Gerard Butler DVDs, but still.)