You are here: Home / Trailers / The Jim Jarmusch zombie trailer is hilarious and I’m dead (for now anyway) 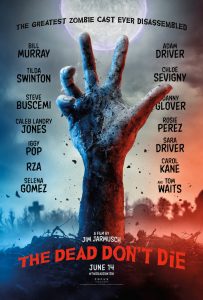 The Dead Don’t Die trailer is an absolute hoot (or maybe a werewolf-y howl).

Or mortician make-up artist Tilda Swinton accusing two awakening bodies she’s been working on “are you in this together?” in a Scottish accent.

Set in the peaceful town of Centerville, the dead begin to rise from their graves and gravitate to what they used to do and where they used to go. Coffee. Tennis. Chardonnay. And if you’re from over here, Greggs.