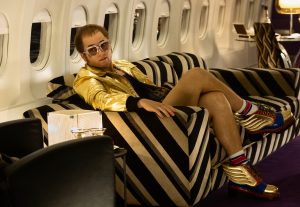 Taron Egerton as Elton John in Rocketman from Paramount Pictures

And rejoice (while singing Tiny Dancer) as for once a movie life story doesn’t have to lead to a Twitter pile-on about how to pronounce biopic. (Bio-pic? By-OHH-pic?)

Because the upcoming Elton John film is being billed as a “true fantasy”. So instead let’s argue over our favourite Elton John song, which is of course Tiny Dancer for all of you.

Rocketman comes out in the UK and US in May next year, and the first teaser trailer is out now.

It’s only just over a minute long, but we get to see Taron Egerton rocking some truly Elton outfits, and indulging in the odd rock star excess. And a few moments of what look like self-doubt and general overwhelmedness (I won’t lie, they reminded me of Egerton as Eddie The Eagle.)