You are here: Home / Film Reviews / Eddie the Eagle 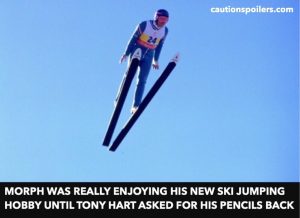 The last snowy film I saw was the misery-fest known as The Revenant so it was with some trepidation that I ventured out to watch Eddie the Eagle. Luckily Eddie is a gloriously feel good film in which no one gets abused by a bear, and which will make you proud to be a plucky not-very-good-at-anything-but-is-really Brit.

The only sad note is that – steel yourselves, ladies – Hugh Jackman, fabulous though he is in this, is not real. He has a key role in the film but is apparently a figment of the writer’s imagination (and for that, Eddie the Eagle writer, I thank you). You know the dead-and-alive Schrödinger’s cat? Well think of him as Schrödinger’s Jack(man). Real and not real at the same time.

The film has a very nostalgic vibe with the early scenes looking as if they’ve been shot through the Instagram Reyes filter for that authentic 1970s sunny-but-faded look.

The clothes are fabulous, and it shows how all fashions come round again eventually as with every outfit Eddie’s mum wore, instead of going ha what were people in the 1970s thinking, I thought to myself “nice high waisted flares with a fitted top! I’d definitely wear those”. In fact the only one of her outfits I wouldn’t wear is her “I’m Eddie’s mum” jumper that she models pretty incessantly in the second half of the film. There is also a great selection of 70s era Christmas jumpers and you will spend the first 10 minutes going “We had a bathroom like that!” And “that’s my nan’s wallpaper!”.

I had visions of Billy Elliot on skis and it really does look like that – the washed out colour in the 1970s/80s scenes, the junk-filled back lanes where Eddie/Billy practice. And there are quite a few dancing and ballerina references too: “it’s not like I want to do ballet!” Says Eddie as a youngster, setting his heart on becoming a skier. (Initially Eddie had dreamt of summer Olympic glory, deciding later on that he was going to aim for the winter Olympic Games instead.)

Taking up skiing, he is actually pretty good, for a Brit. However he’s told in no uncertain terms by Tim McInnery, an unpleasant GB Olympic board member whose nasty personality is surpassed only by the vileness of his toupee, that he’ll never get a place in the team. Switching to ski jumping, he has to leave home for a German training facility to self-train, a feat made harder by the unpleasant sneering of the other ski jumpers.

Eddie has no money and is discovered sleeping in the storeroom of a tavern owned by glamorous older woman Petra. She helps him out despite him presumably adding absolutely nothing to her profits thanks to his refusal to drink anything but milk on a night out. And it’s at the training facility that Eddie meets Bronson Peary, a snow-groomer with a drink problem (not milk-related).

Bronson (real/not real Hugh Jackman) is a washed up American ex-ski jumper who had talent but no discipline. He never reached his potential and now tends to the snow at the jump centre. He also appears to have only one shirt – a nice long sleeved black number which he wears tucked in – but still, only ONE SHIRT. This film had a budget of over $20 million, people, they could have afforded another shirt. Especially as all the other clothes in the film were probably bought from the charity shop for 80p or knitted by the producer’s granny.

Eddie wants Bronson to train him but he refuses to get involved – though faced with Eddie’s persistence, he agrees to teach Eddie how to land only. This he does in a scene reminiscent of Dirty Dancing (though I don’t remember Baby ever admitting after a perfect lift from Patrick Swayze that “a little bit of wee came out”).

Thanks to his training Eddie manages to jump far enough to get a place on the GB Olympic team but the course of true skiing never ran smooth. Well actually it probably does, ski courses look pretty smooth on TV. But you know what I mean. He ends up a hero around the world, to the sounds of Jump by Van Halen. (I bet you’re singing that under your breath right now. You are aren’t you.)

Eddie The Eagle is full of cliches of course but then what plucky British underdog film isn’t? And some of the cliches are probably true (I’ve met enough posh snobbish Brits to know they’re a movie trope for a reason).

Taron Egerton is brilliant as Eddie. Enthusiastic, gauche and endearing but definitely not stupid (Eddie did after all set a new British record, he wasn’t a sporting dunce at all). Keith Allen as his dad is predictably unsupportive throughout the film but turns up at the airport in the final scene with an “I’m Eddie’s dad!” jumper. Eddie’s mum is just a delight, constantly supportive of his dreams. I like to think I’d be like Eddie’s mum to my children but I’d probably say “what? You want to be an Olympic ski jumper? And you live in south east England? Hahahaha”.

There’s some great physical comedy aside from the very painful looking bad landings – including a lovely scene where the hopefuls for the British ski team are all lined up in a row at a reception. Eddie skis up to the start of the horizontal line, accidentally knocks the person next to him and the whole group fall over like dominos.

I must admit I cried a bit at the end. And to really enjoy this film you need to leave your cynical icy cold heart at home, and go prepared to laugh, weep, recognise 1970s wallpaper and sing along to “Jump!” By Van Halen. Go on, you know you want to.