“”When I do a show… 20 minutes before I go on I choose my outfit. And until then I don’t become Elton John.” Elton John on “true fantasy” Rocketman (check out my 4.5/5 review here.) 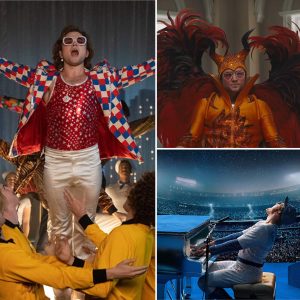 Julian Day was the costume designer for Rocketman, and unsurprisingly the outfits were an integral part of the film. The paradox of Elton John is that while the costumes feel entirely part of him, his music (and Taupin’s lyrics) don’t need any theatrical embellishment – yet it all somehow just adds to Elton John the character, and his appeal.

There are two featurettes on the costumes in the film, including a Q&A between Day and Derek Blasberg, with input from Elton himself.

Elton John’s stage outfits have rivalled the Met Gala for glamour, glitz and inventiveness, and gave Elton an extra creative outlet  – so the  fantasy biopic had a big task on its hands to ensure they did Elton justice.

And check out this short film about Elton’s journey from unhappy childhood to rock superstar, with comments from director Dexter Fletcher, David Furnish and the man himself.

It’s directed by Dexter Fletcher. You can watch the first teaser here and the second trailer here.

The costumes of Rocketman – featurette:

You can never be overdressed – images