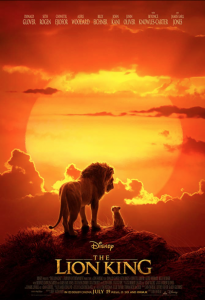 Why is it that fluffy animals with human emotions in movies don’t affect me, yet I’ll happily admit to weeping buckets when Wilson the non-sentient volleyball drifted off across the sea from Tom Hanks’s raft in Castaway?

I don’t even like sport. (And sorry for spoilering that for you. It’s okay though, he makes another Volleyball Winston at the end of the movie! Oops sorry again.)

Even I, with my unconcern for adorable lion cubs in danger, can identify a lack of emotional heft in the new Lion King, though as the original didn’t really raise me from my 1990s student torpor that to me is not a dealbreaker.

Sure, the change from 1994 Lion King animation to 2019 Lion King virtual reality photorealism and CGI does lose something. When an animal looks exactly as it would in real life, the anthropomorphism has to be reined in, which can mean a lost connection to the human audience. The new look is something else though.

When you think about what you watching, it really is extraordinary: the wind ruffling Mufasa’s mane as he stands on the rocky outcrop, Scar’s softly menacing walk, the wildebeest stampede, the sunbeams pushing into the gorge as Mufasa dies. I had to make myself focus on the images because their realism meant I quickly stopped thinking “wow” and went to “yeah, lions”.  It almost looks too good.

One’s idea of realism can also become confused; we are, after all, watching singing animals, fighting for the continuation of primogeniture.

(This article from The Telegraph about how it was made is fascinating, though I’m still not entirely clear in my mind what they did! And check out director Jon Favreau’s tweet about the one “real” shot – this Lion King isn’t really live action either. If anything it reminds me of the 19th century family portraits hanging on our staircase when I grew up: photographs which had then been painted, which in the best cases meant ultra-realism combined with a timeless artistic sensibility.) 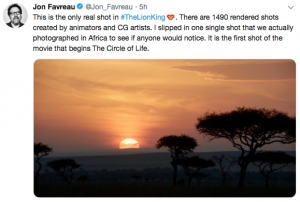 Gorgeous though this film is, it’s impossible to ignore the fact that The Lion King is often quite dull, and I wasn’t too bothered about who was threatening to eat whom.

Luckily its earnestness dissipates with every appearance of Timon the meerkat (Billy Eichner) and Pumbaa the warthog (Seth Rogen).

They’re a joy (Eichner and Rogen bounce off each other with natural aplomb), and the ultimate scene stealers – cheeky and laid-back, nevertheless they have a deep love for each other and an understanding about how their little Eden must run. I much preferred their “meaningless line of indifference” to the circle of life, an idea which comes dangerously close to a justification of eating one’s subjects.

Ageing villain Scar (Chiwetel Ejiofor) is brilliantly realised, helped by Ejiofor’s seriously wonderful delivery: dangerously smooth and just masking that seething fury. Bristling with sibling rage at his brother the king, Scar simmers in bitterness: envious, sinewy and battle-scarred. The big question is why baby Simba is allowed anywhere near him. I know you should keep your friends close and your enemies closer but I’m not sure that’s meant to include babysitting.

Scar’s henchmen, the snarling hyenas, are an ugly bunch (hyenas already look like they’ve been made out of leftover bits of other animals, then given the diet to match) – a decent mix of viciousness and, when they find someone stronger than they, obsequiousness.

Hyena friends Azizi (Eric André) and Kamari (Keegan-Michael Key) battle each other humorously over personal space, and it just about works; particularly as otherwise they become too powerful as a pack. Their light relief is also their weakness.

Mufasa is again played by James Earl Jones, his voice both mellifluous, and weighty with regal duty and weariness.

Nala is sweet as a cub, independent and spirited. All grown up, and voiced by Beyoncé, she is shocked at the adult Simba (Donald Glover) when she finds him unexpectedly alive and chilling, and the ease with which he ignores his birthright and the responsibilities that come with it. Neither particularly connects until their duet, Can You Feel The Love Tonight, which is lovely, as the two lions cavort in the evening sunlight (I’m giving them the benefit of the doubt that it’s evening, given the song title).

The other songs feel like they’re taking place there and then; I liked that they sound a little scratchy and homespun at times, which adds to the charm.

Like many films where we are expected to identify with animals there are wobbles around wild diets: who is a friend, who is a pet, and who is dinner? Here in the lush valley where he grows up with Pumbaa and Timon, and a selection of other juicy-looking prey, Simba has to learn to eat bugs – one of which looks so characterful I fully expected it to start singing It’s a Hard Knock Life just as Simba snaffled it.

This new Lion King is a visual powerhouse but not an emotional one. Partly because animals’ mouths often can’t signal much, particularly lions’ mouths (I have a cat and she has two expressions, both delivered with regal haughtiness: wtf, and WTF). Warthogs look smiley anyway, and meerkat behaviour adds instant character, but for many of the animals the actors’ voices and some ear-twitching have to do the work.

In principle I have no issue with remaking old films for modern audiences with newly available techniques. There’s a reason the same stories are repeated, across different genres, and through time; they continue to resonate, and new methods of telling them mean they stay fresh.

Admittedly, just because you can doesn’t mean you should – I’m sure one day someone will try to reboot Jurassic Park again, but this time with real dinosaurs. But this updated Lion King, though not perfect, is certainly not hubris; and has its heart in the right place.