You are here: Home / Film Reviews / How To Train Your Dragon: The Hidden World 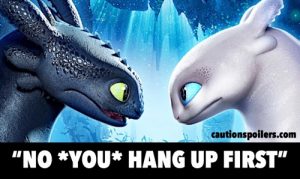 Children’s films always need to keep the parents interested too and How To Train Your Dragon: The Hidden World certainly has something that’ll please a lot of mums. Yes, Hiccup grows a beard – and my god he’s hot.

Imagine John Krasinski in A Quiet Place crossed with one of the Chrises (I can’t remember which one, the one who looks good with a beard).

This is a wonderful send off for our favourite Vikings, as Hiccup (Jay Baruchel) learns how to be a leader – with all the real difficulties that entails, from admitting you need to change your mind to letting those you love fly.

The lessons in How To Train Your Dragon 3 are like gobstoppers: multilayered, brightly-coloured, not always palatable, and taking one hour 45 minutes to get through.

It’s a hugely enjoyable hour and three-quarters though, and neither terrifies children nor treats them like idiots (some of them will be idiots, but not because they’re children).

As we’ve come to expect from this franchise it’s honest and doesn’t take the easy route; how often have films copped out by saying that letting go means someone will decide to stay with us as a reward? It’s also about what makes a home, the place or the people, which is only an easy question if you’ve never been forced to move.

Berk is now “the world’s first dragon-Viking utopia”; a happy, colourful place if a bit of a ramshackle mess. Gobber (Craig Ferguson) thinks it’s getting out of hand; the village is bursting at the seams as each dragon rescue brings a new intake of fire-breathers needing shelter.

The rescues, too, are somewhat haphazard: “perhaps you rely too much on your dragons and not enough on one another”, admonishes Hiccup’s mother Valka (Cate Blanchett), after another (admittedly highly entertaining) raid that was successful more by accident than design.

Hiccup is pondering marriage, though for Astrid (America Ferrera) it’s a “not yet”, and Tuffnut’s (Justin Ruffle) constant comments about Hiccup’s uselessness as a potential husband aren’t helping.

Night Fury dragon Toothless is also growing up, and also has love on his mind, falling for a cute white Light Fury dragon. And one of the sweetest segments is when Toothless’s rather clumsy attempts at wooing have to be supplemented by Hiccup hiding behind a rock, popping out to mime what the dragon should do to get into her good books.

But the world still isn’t ready for dragons living side by side with humans, and they now face probably their greatest threat in Grimmel the Grisly (F Murray Abraham, menacing without being overblown), whose aim is to rid the world of dragons entirely.

Looking like the love child of late football pundit Jimmy Hill and fashion designer Jean-Paul Gaultier, Grimmel is the greatest dragon killer of them all, and yes he’s taking prisoners. Now he’s after Toothless; as the alpha, if he is captured all Berk’s other dragons will follow him.

Grimmel hides out in a black towering castle atop black towering cliffs surrounded by black towering ships, all shrouded in swirling fog. He’s clever too, using dragons to kill dragons, and always one step ahead of those who think they have outwitted him – including Ruffnut (Kristen Wiig), whose pride almost leads to disaster, though we’ll let her off because she gets a great joke out of it.

He’s a much tougher, cannier opponent than the image he projects, that of a pantomime villain in a cloak. He studies how people act and uses their pride and self-confidence against them.

Hiccup is the one who realises the danger Grimmel poses, and what he represents: that they can never be free. The answer, he thinks, is the Hidden World, a semi-mythical place described to him as a child by his father Stoick, from where all dragons originate. Situated at the very edge of the world, it could be the haven they’re looking for, for all the residents of Berk, dragons and humans.

But Hiccup’s journey to trusted leader is turning out to be a tough one; while his plans are pushed through, dissenters are soon making their feelings known. Astrid too is not entirely on board.

The Hidden World, when Hiccup and Astrid find it, is a glittering, sparkling, brightly coloured haven; stalagmites in glorious pink, purple, green and blue soar upwards from the floor of a huge undersea cavern, while shoals of tiny golden baby dragons fly through the air.

Hiccup’s original plan, that everyone and all the dragons should simply move to the Hidden World, is a non-starter. It’s a dragon homeland, not a human one – turning up and taking over isn’t an option.

And the biggest lesson of all comes from Hiccup’s dead father Stoick (Gerard Butler; like Peter Benchley post-Jaws, I think Butler has now made up for his earlier anti–dragon propaganda movie Reign of Fire).

Stoick only appears in a couple of flashbacks, and delivers probably the most poignant speech: “with love comes loss… there’s no better gift”.

This is an emotional send off that had me shedding a tear (though not my 7 year old; he’s just… more stoick then me I guess). Director and co-writer Dean DeBlois has delivered a pacy, funny and beautifully-judged film which is also a fitting end to Hiccup and Toothless’s tale. It’s incredibly accessible to children – from its contrasting visuals to its set-pieces and clear, witty dialogue – while the plot doesn’t shy away from quite tricky questions.

These Vikings have such a hold over us but I think now I know why: “Bad hair, strange teeth and a twig for a neck” is how Tuffnut describes Hiccup, which just shows how much Viking DNA we Brits still have.

Watch the first trailer for How To Train Your Dragon: The Hidden World:

Watch the second trailer for How To Train Your Dragon: The Hidden World: