You are here: Home / Interviews / I’m burning up! NEW cast interviews, poster for How To Train Your Dragon 3

My life motto is that you can never have too many dragons or two much Gerard Butler, and I’ve got to admit that in this regard I’ve been blessed: first Reign Of Fire and then the How To Train Your Dragon franchise. 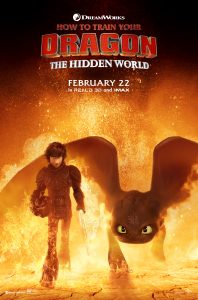 So you can imagine my delight on finding out that there are new publicity interviews for How To Train Your Dragon: The Hidden World.

PLUS we’ve got a new, very fiery poster.

And while it would be lovely to pretend they did all this for me, the reason for this extra love is that How To Train Your Dragon 3 has had a staggered release schedule – and though it opened in Australia at the start of the year and in the UK two weeks ago, it’s only opening in the US on 22 February.

Don’t forget to check out my 4-star review, the LA premiere interviews and first two trailers.