You are here: Home / Film Reviews / Reign of Fire 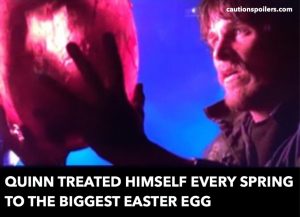 This is a cautionary tale about being careful what you wish for – in this case, an extended London Underground, where digging disturbs a creature left down there for centuries. And I’m talking a giant dragon, not some poor 16th century commuter desperate to get back to his olde hovel in Southwark.

Reign Of Fire has gorgeous scenery (the bits that haven’t been burnt to a cinder), a battle for the survival of humanity, dragons, and a Christian Bale/Gerard Butler bromance: G-Chris, in fact.

Luckily for we proponents of the female gaze, G-Chris still manage to look hot, and not in a burning-to-death way (well not at the beginning anyway); despite Armageddon, dressing like 1980s students in army surplus, and Butler’s early-career, authentically British teeth.

It’s the turn of the new century when schoolboy Quinn visits his single mother Karen, who is managing part of the Tube extension works. The digging has unearthed a huge chamber, holding a sleeping dragon; woken from its millennia-long slumber, it chases Quinn and his mum up the lift shaft before killing her.

Previously responsible for the destruction of the dinosaurs, the dragons have been in hibernation ever since, lying low until the earth replenishes itself with prey, not unlike me waiting for Waitrose to restock the organic prosecco aisle after a bank holiday.

Fast forward to 2020 and since the monsters’ re-emergence humanity has been all but destroyed, apart from a few isolated outposts. The adult Quinn (Christian Bale), is holding out against them from a castle in Northumberland along with best buddy Creedy (Gerard Butler), some other adult survivors and lots of children.

It’s a perilous life, where people with practical skills are most sought after; but even in this tight-knit group there is discord over the best way to maximise their chances of survival.

I’ll admit I’m a big fan of end-of-the-world scenarios (although my adoration is waning slightly as these films become less like fantasy and more like documentary). Give me a spinning newspaper with a headline proclaiming that the Queen’s corgis have been taken to Balmoral for their own safety while millions die of some excruciating virus, and I’m happy.

And one of my favourite apocalyptic movie-watching pastimes is wondering how I would cope, the answer being quite nicely, probably.

I’ve got a solar mobile phone charger so I can tweet attractively concerned selfies, perhaps with my finger on my chin, while a dragon cruises in behind me, breathing fire and singeing the edges of my hazmat bikini. My under-the-stairs stockpile is less custard creams and baked beans and more lipgloss and toothpaste.

Poor Quinn and Greedy don’t seem to have stockpiled much of any use, unless you count the world’s entire supply of Frizz-Ease which Creedy seems to have got his hands on, if those bouncy End Times curls are anything to go by. And their fellow survivors seem skilled (the world probably won’t need 40-something movie reviewers come the apocalypse, so it’s a good thing I can also make my own bread and would win a pub quiz about 90s guitar bands).

The survival of our sense of humanity (empathy and fellow feeling), in the face of humanity as a group facing its end, is key to many (most?) apocalyptic stories. It’s as if we want to test ourselves now to find out if we are truly human.

The central paradox is why personal relationships are so often sacrificed in the face of constant danger and death, when we often consider those relationships to be key to what we are fighting for.

In Reign of Fire the two men understand that survival is also about hope, and are dedicated not just to ensuring the children’s safety but also to giving them an approximation of a childhood, one which accepts the new while harking back to the old. Their version of the Empire Strikes Back “I am your father!” scene, acted out in the castle just before the children’s bedtime, is great fun and features the most bouncily over-acting kids I’ve ever seen.

Before bed, Creedy and Quinn make the children say their prayers. Not to God, who has abandoned them to biblical fiery destruction, but repeating a list of instructions to keep them safe: “dig hard, dig deep, go for shelter and never look back”.

Life is hard and perilous. The adults don’t even all agree on the best way to keep the group alive. Crops are destroyed in an instant by a fly-by dragon. Some of the group just can’t run fast enough.

And then, just when it looks like things can’t get any worse, it gets worse – with tanks of American servicemen appearing at the gates, headed by Denton Van Zan (a bald and super-muscly Matthew McConaughey).

“There’s one thing worse than a dragon – Americans” points out Creedy sagely, which I’m considering cross-stitching on a sampler and smuggling into the next National Trust country house I visit, where it will hopefully then make an unexpected appearance in the next big screen Jane Austen adaptation.

Against Creedy’s advice Quinn lets them in, including female helicopter pilot Alex (Izabella Scorupco) and her crew of dragon-slaying free jumpers, or Archangels (life expectancy about 17 seconds). Van Zan’s team have also discovered the dragons’ weak spot, that their sight is poor just before sunset.

Sadly but not entirely unexpectedly everything goes wrong and after another dragon attack, Creedy – funny (mostly), grubby-toothed (for now), shortbread-loving (probably), gorgeously Scottish (always) Creedy – is incinerated trying to rescue people from the upper floors of the castle.

Reign Of Fire‘s lack of commercial success has always baffled me. It’s no masterpiece but it is an exciting if doom-laden B-movie adventure that has stood the test of time rather well. The plot is enjoyably batshit, unless you’re the kind of person who likes conspiracy theories and thinks our beloved queen is a giant lizard, in which case consider this film alt-history.

And, thank goodness, everyone plays it completely straight. There’s also some brilliantly clunky backstory exposition, where characters who’ve known each other for years deliver unlikely dialogue: “you’re my best friend!” Creedy reminds Quinn in case he’d forgotten. No one says that in real life, unless it’s Freshers Week and they’re about to get matching tattoos with someone they’ve just met.

Bale is desperately intense and there’s plenty of action along with some touching moments. The scenery is stunning (it was filmed in Ireland) and it’s relatively easy to imagine mankind’s collapse and gradual climb back as they struggle to survive amid battle-scarred rocks and hillsides.

Occasionally Creedy veers into labrador puppydom, but in the main the relationship between him and Quinn is rather moving. The pair genuinely care for their small charges, and will do anything to protect them in this fiery hellscape.

buy / rent reign of fire on amazon video or buy the dvd or blu-ray from amazon.com