You are here: Home / Film Articles / LA premiere: How To Train Your Dragon: The Hidden World interviews 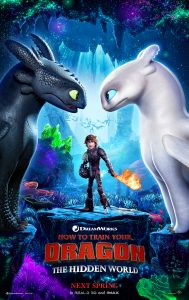 *** Read my 4-star review of How To Train Your Dragon: The Hidden World now plus more interviews with the cast, film clips & new poster ***

Check out these red carpet interviews with director Dean DeBlois and some of the cast from the How To Train Your Dragon: The Hidden World LA premiere on 9 February.

“Now chief and ruler of Berk alongside Astrid, Hiccup has created a gloriously chaotic dragon utopia. When the sudden appearance of a female Light Fury coincides with the darkest threat their village has ever faced, Hiccup and Toothless must leave the only home they’ve known and journey to a hidden world thought only to exist in myth. As their true destines are revealed, dragon and rider will fight together – to the very ends of the Earth – to protect everything they’ve grown to treasure.”

Review coming later! (I’m just off to watch it now… apparently there will be tears! And not just because my 7 year old always eats all the pick ‘n’ mix before I can nab any.)