So I guess what I’m saying is, Well done Allison Janney! But don’t worry about me, I’m still dealing quietly with Geostorm being so cruelly overlooked. 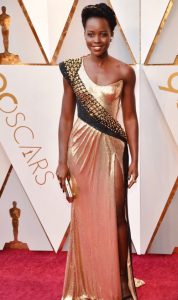 Here are some of the winners. And my favourites, because it’s my website. Plus my favourite dresses, a shirt and a dinner jacket (thank you men! Better late than never in the sartorial Oscar stakes).

The nominees list is quite diverse though there’s still a long way to go. And thank god no single movie swept the board; spread the movie love! Though I’ve probably seen enough films about Churchill, the Dunkirk evacuation, or Churchill & The Dunkirk Evacuation (what a great swing band name that would be) for a while.

But how was Boss Baby nominated? Maybe my 6 year old has been accepted as an Academy voter as he won’t turn the bloody thing off.

I did love Shape Of Water, though I wanted Get Out to win; it’s an amazingly entertaining and gripping film. Made by a black writer/director (Jordan Peele), for under $5 million, it’s also a genre film – and it’s always a breath of fresh air when a film that doesn’t have OSCAR BAIT scrawled over in invisible ink wins (not that I think Shape Of Water is Oscar bait. Hell I gave it 5 stars!)

I enjoyed seeing all nine nominees though I think Lady Bird was the weakest. Call Me By Your Name, though it looks luscious (it reminded me of a Tuscan holiday in 1987 when I was chased around by teenage boys on mopeds) just hasn’t stayed with me.

My second choice to win would’ve been Dunkirk. I saw it in a packed cinema with an audience ranging from teens to 90s, which made it even more moving.
My review of The Shape Of Water 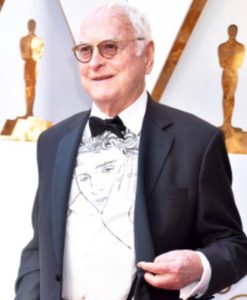 McDormand puts in a terrific performance playing a bereaved mother. Her character Mildred, searching for justice after her daughter has been raped and murdered, is certainly flawed; but women are flawed, and society too often expects perfection before offering justice.

I have to say though, Margot Robbie in I, Tonya completely won me over. Her performance as the real life skater Tonya Harding is funny, moving, brutal but never condescending. The film, and Robbie’s performance, are unashamedly pro-Tonya.

She was abused by her mother and her husband, and when her talent (she was the first US woman to land a triple axel in competition) should have been her escape route, she was continually pushed back. But did she or didn’t she know about the attack on her rival Nancy Kerrigan?
My review of Three Billboards Outside Ebbing, Missouri 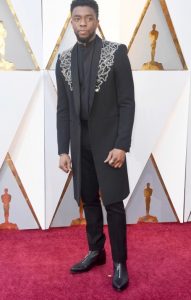 Oldman’s physical transformation into Churchill is extraordinary. It’s easy to focus on that rather than his performance though, which is also astonishing. Darkest Hour wasn’t a film I expected to rate but I mostly loved it (apart from that cringy scene on the Tube train). And anyone actually worrying that acting jobs for white middle aged men will become thin on the ground need not fear, as long as period dramas set in the House Of Commons are made.

I’d have liked Daniel Day-Lewis to win for Phantom Thread, though I’m assuming he was just playing a whiny old man and isn’t actually one himself. (I’ll admit I hated the first few minutes of Phantom Thread then it completely won me over.)
My review of Darkest Hour 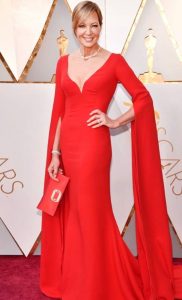 Sexy, elegant, a total show-stopper. But that’s enough about Allison Janney – her dress (Reem Acra) gets an award from me too

I’m not going to argue with this one! I loved Janney’s performance as Tonya Harding’s mom LaVona, an abusing chain-smoking mother who is interviewed with a parrot on her shoulder. Her performance is brilliantly brittle, and funny. (And if you’re British, she also looks exactly like Coronation Street’s Deirdre Barlow).
My review of I, Tonya

I thought Rockwell’s performance as Officer Jason Dixon was great. The film has been criticised for glossing over Dixon’s racism with a redemptive ending to his character arc. While Dixon is horribly racist, and the movie misuses its black characters, I don’t think Dixon is redeemed by the end of the movie, or feels that he is redeemed.

Ultimately though I preferred Willem Dafoe’s performance as the manager of the housing block in The Florida Project. His Bobby is a realistic mix of frustration and concern as he tries to help his tenants, particularly the children, while also doing his job. It’s a beautiful film which needs Bobby to balance out the darkness and the children’s rainbow-filled imaginary lives.
My review of Three Billboards Outside Ebbing, Missouri 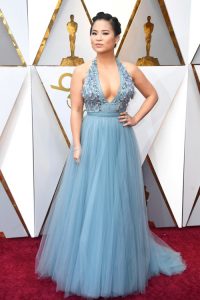 If you’re going to go 100% princess, do it like the lovely Kelly Marie Tran (Jenny Packham)

I’m pretty happy with this. It’s a lovely film, and unlike anything else I’d seen for a long time (I honestly can’t remember the last time I watched a woman fall in love with a fish during the Cold War).

And it’s a deserved win for Del Toro (though I still blame him for the nightmares Crimson Peak gives me).

But but but… if it was up to me, I wanted Christopher Nolan to win this for Dunkirk, one of my favourites of the year.
My review of The Shape Of Water

Roger A. Deakins – yay! Finally for an Oscar for Cinematography, for Blade Runner 2049. I liked the movie but wasn’t wasn’t massively enamoured (and my god it’s long) but its look is extraordinary.

Jordan Peele won Best Original Screenplay for Get Out, and James Ivory is now the oldest Oscar winner for his Best Adapted Screenplay win (Call Me By Your Name). 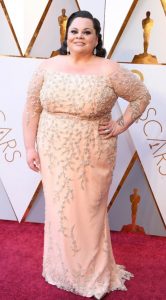 Unsurprisingly Best Costumes went to Mark Bridges for Phantom Thread – the outfits in the movie are wonderful, and are much more than *simply* clothes (think armour, or in the case of the torpedo boobs, weaponry).

Coco won Best Animated Feature – a wonderful film about Mexico’s Day Of The Dead, it demonstrates a more diverse approach to film-making. I loved it and so did my two boys.

In the interests of full disclosure, I still haven’t seen Mudbound. I’ve heard amazing things about Mary J Blige’s performance (she was nominated for Best Supporting Actress) and Rachel Morrison (the first woman to be nominated for Cinematography).

And I really want to see The Silent Child, about a little girl who is deaf. It’s a British film and won the Oscar for Best Live Action Short for Rachel Shenton and Chris Overton. Shenton delivered her winner’s speech in sign language.

You can see all nominees, winners and speeches at http://oscar.go.com.