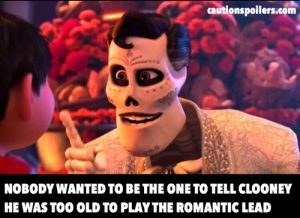 Coco is an extraordinary feast for the eyes, and rather a delight for the ears too.

It’s a deliciously colourful experience, from the prettily embroidered dresses of the women in 12 year old Miguel’s family; to the glowing candles and orange marigolds filling the graveyard on the Day Of The Dead; to the Land Of The Dead, a multi-storey city dotted with purple, green, red and blue like jewels, against a black velvet backdrop.

Though despite the friendliness of the dead, there’s a darkness to them, and to this movie, too.

Coco is Miguel’s great grandmother, a much-loved matriarch gradually succumbing to dementia. She’s looked after by her daughter Abuelita, who is so protective that all music is banned – after Coco’s musician father walked out when she was a child to follow his musical dream, and never returned.

There’s a photograph of a young Coco, her mother Imelda, and her father in the family ofrenda (the little altar where family photos and offerings are displayed) though his head has been ripped from the picture.

But the musical gene has come out in young Miguel (Anthony Gonzalez), a shoeshine boy who loves to play guitar and to sing in secret. He’s hoping to follow in the footsteps of his idol Ernesto de la Cruz (Benjamin Bratt), the self-proclaimed best musician in the world – long dead after an unfortunate incident on national TV.

Miguel soon convinces himself Coco’s dad was actually Ernesto, and it’s on The Day Of The Dead, when Miguel tries to steal Ernesto’s guitar from his tomb so he can play in a talent show, that he finds himself transformed – now only the dead can see him, and he can see the dead.

Meeting his deceased family in the graveyard for the first time, it takes the boy a while to match these well-dressed skeletons to the photos in the ofrenda: “Remind me how I know you?” he asks, before discovering that Coco’s mother and Miguel’s great great grandmother Imelda (Alanna Ubach) is stuck in the Land Of The Dead, unable to cross over.

After crossing the bridge to the Land Of The Dead himself, his joy at meeting his large dead family is rather lessened by the fact that his attempted guitar theft has left him cursed. He has to receive a family blessing to return home, and he must do so by sunrise or he will turn into a skeleton himself and have to stay.

But Imelda’s blessing is conditional on no singing or guitar playing, so he runs off to find Ernesto. En route he meets Hector (Gael García Bernal), a charmingly ramshackle and rather ne’er-do-well skeleton, who is annually thwarted in his attempts to get back to the living to see his daughter, as no one has put his photo up in their ofrenda – and no photo means no exit.

There’s an awful lot of rushing about as Miguel crashes Ernesto’s musical extravaganza party, and even more bony limbs and skulls fall off as Miguel discovers who is the dead bad guy and who is the dead good guy (Northern joke).

And while the constant chasing around looking for people who can help Miguel means the film never drags, there are rather too many mini-disasters in the last quarter.

Still, the rushing, rushing, rushing means we are moving forwards (and backward and forwards) too quickly to question the plotholes, particularly around those damn photos and how exactly people can be remembered.

The Land of the Dead is well fleshed out, if I can say that, even having an area where those who are not remembered with photos can live together – a family of people without a family.

Hector is well known to its occupants, partly because of his habit of borrowing people’s possessions which are never returned: “my mini fridge… my good napkins… my lasso… MY FEMUR??” demands one friend, and it’s here that Miguel discovers just how important remembering one’s family, through photos and songs and stories, really is. Because when the memories of the living completely fade to nothing, so do the skeletons in the Land Of The Dead, disappearing entirely – a sort of Superdead.

The villain of the piece turns out to be not just a killer but a plagiarist, a reveal which has probably left every writer reading this collapsed on the sofa in horror.

There’s much going on in Coco, and lots of plot detail to take in, particularly if you’re not completely familiar with the Day Of The Dead legend. I wasn’t, though even with my limited background knowledge this appears to be sensitively told, without a hint of preachiness.

Its humour is often in the side details. I loved the border guards checking the dead back in after they’ve returned from visiting their living relatives: “Anything to declare?” they ask. “”Churros from my family” replies someone carrying offerings left at their grave. And there’s a terrific cameo from a skeletal Frida Kahlo.

The music is fun and occasionally mournful. The main song is a ballad called Remember Me, which we hear more than once and becomes more moving as the film progresses.

Coco is about a family’s love and loss, and how in dealing with love and loss, people often do the wrong thing for their loved ones but for the right reasons (something which is quite hard to instil in children, who tend to be black and white in their thinking).

Though the lesson about the importance of family should perhaps be aimed at parents. In my experience, small children get on extremely well with the very old, however cantankerous and dribbly, possibly because small children too are often cantankerous and dribbly. I tend to find when we visit my elderly mother I revert to an annoying 15 year old, my mum reverts to the annoying mum of an annoying 15 year old, but she and my boys get on brilliantly.

I took both my children to see Coco, and while my more sophisticated 8 year old adored Miguel’s dog Dante metamorphosing into a brightly patterned, winged spirit guide, my 5 year old could be heard chortling loudly and shouting “Mummy, his head fell off!” every time a poor skeleton lost its skull (I do worry occasionally that in 30 years’ time I’ll be one of those mothers of serial killers saying on TV “honestly, there wasn’t anything odd about him as a child…”)

As in the best children’s films, the villain meets his end most gratifyingly – ask not for whom the bell tolls, it tolls for thee.

now available from amazon.com on god / blu-ray / dvd and 4k