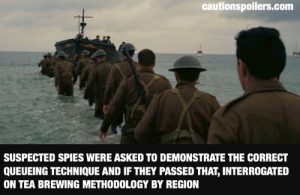 If there’s one thing war films have taught me it’s that conflicts are long periods of quiet boredom interspersed with flashes of horrific fighting, injuries and death.

Dunkirk isn’t boring but it is a film that feels remarkably quiet, which is odd as though there is little dialogue there is music everywhere, along with screeching bombs and exploding torpedoes and the screams of the dying. The stillness is quite extraordinary, like time has just given up on men and their warmongering. But then the bombing starts again and it is relentless and seems like it has always been so.

I’ve rarely felt so depressed watching a film as during that first half of Dunkirk, and that’s knowing the mission was ultimately successful – as soldiers finally got a place on a ship, along with cups of tea and sandwiches from smiling women wearing red crosses on white aprons, before a torpedo turned it into a fireball. And then the flotilla of small pleasure boats appeared on the horizon, as Kenneth Branagh scanned the sea, and I burst into patriotic tears.

There are three timelines in Dunkirk, though I didn’t find it hard to follow. The stories, which at certain points intertwine, take place over a week at The Mole, the jetty where the soldiers are loaded onto boats; a day at sea as the little boats set sail for France to help bring the stranded soldiers home; and for an hour in the air as Spitfire pilots battle to protect the boats.

The tale of Dunkirk in 1940 is burned into Britain’s DNA, though probably with as much historical licence threaded through as the movie. The flotilla of small boats with their plucky owners, sailing across the English Channel, were a tremendous triumph and their journeys were not without grave risk – and yes, although as is often pointed out most of the rescued soldiers were brought home by larger ships, ferries and the Navy, thousands were saved by the pleasure craft who set out from England, often with their owners at the helm.

Often forgotten, and which director Christopher Nolan points out, is that the successes of Dunkirk were the result of a massive military failure, after the Phoney War of late 1939 suddenly got very real and the Germans pushed the Allied Forces to the brink. By June 1940 it looked inevitable that Britain would be invaded – and just imagine the films we’d be watching now if that had happened. Actually, don’t, it’s too grim. Films about the WW2 are often grim enough anyway, even though “we” won.

Churchill needed 45,000 soldiers back home to defend the country against an invasion, but 300,000 were plucked off those beaches to safety. Of course then most of them had to go back to war again.

Mr Dawson (an extraordinary Mark Rylance) has his boat The Moonstone requisitioned by the Navy, but after loading it with life jackets, instead of letting the Forces sailors take it across the Channel he, his son Peter (Tom Glynn-Carney in a performance which shows Peter’s growth from boy to man over the course of one journey), and their young friend George (a wonderfully touching performance by Barry Keoghan) set out alone. Mr Dawson (I can’t even bring myself to simply call him Dawson which is what I usually do with characters’ names) is always smart in a shirt, tie and pullover – not Sunday Best as this is what he probably always wears. (He really reminded me of my dad. 16 at the end of WW2 , he was too young to be called up. Throughout his life, whether working in his office or hiking up a hill, he’d be in a shirt, tie and pullover.)

But before The Moonstone gets near Dunkirk they pick up a shaking, almost silent soldier (Cillian Murphy), sitting shell-shocked on an upturned hull, who is terrified at the thought of heading back to France.

Brave, focussed and hugely knowledgeable about war, Mr Dawson can identify an approaching plane and the side it’s on just by the engine sound. The boat by now filled with rescued soldiers, a German bomber lines up again: “he’s coming back and he’s coming back round!” shouts Mr Dawson, while instantly working out knife-sharp instructions for Peter at the helm so the young man can safely manoeuvre the craft out of the way.

Meanwhile in the air Collins (Jack Lowden) and Farrier (Tom Hardy) duck and dive providing air support to the boats and the men waiting at Dunkirk. The little planes spin almost upside down, us with them, as fuel gauges plummet, looking so rickety they could fall out of the sky at any moment. It’s a dizzying and heart-bursting spectacle.

Back in Dunkirk the vast, dirty beige beaches are split by snaking lines of dark-uniformed soldiers making their way along piers and into the sea, awaiting deliverance. You can practically see home from here, says almost everyone who says anything.

The terror of the soldiers is obvious, combined with a weird resignation as they wait, envious of the ones further up the line until a bomb or a sinking rescue craft pushes those at the back nearer to home for all the wrong reasons.

And there’s a sense of loneliness too, alongside the regimental comradery. Tommy (Fionn Whitehead), a young British soldier, has fought off bullets in the town to get to the beach, his friends having fallen in the streets. Desperate to get away, in the dunes he meets and teems up with the strangely silent Gibson (Aneurin Barnard), before they use all their ingenuity to try to get home.

Meanwhile Kenneth Branagh’s Commander Bolton, immaculate in his Navy uniform, is managing the formal evacuation. He has to make sudden, horrible decisions, ordering that a sinking ship, filled to the brim with stretchers and minutes from leaving before being hit, be pushed away from the pier, as the jetty must be kept free so the evacuation can continue. And he and Tommy separately endure agonisingly slow waits for the tides to turn in their favour, which must have made them wonder if the gravitational pull of the moon was also in the grip of the Nazis.

The sparse dialogue is terribly British, from the radio messages (a wonderful cameo and no I’m not going to tell you who), to Branagh’s brave stiff upper lip, and Farrier’s understated “Best of luck, Collins” as a Spitfire plummets into the sea, smoke pouring from its engines. It’s very make-do-and-mend, as lorries are lined up to create a new jetty. And the queueing! Waiting, waiting, knowing at the end they might get home and there might even be a cup of tea or even better, a beer.

Dunkirk may be short on words but it is not short on brilliance. And despite the tiny boats, big ships, darting planes, lumbering lorries and repeated identical queues, Nolan’s spotlight shines on humanity in all its bravery and mundanity.

Click here for my article about representation in Dunkirk (yes there were women there!)

buy dunkirk on dvd or blu-ray from amazon uk

buy / rent dunkirk on amazon video or buy the dvd or blu-ray from amazon.com