You are here: Home / Film Articles / Once More Onto The Beach Dear Friends… Yes Let’s Talk About Dunkirk 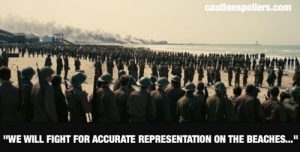 This is a fight for freedom – freedom to diss aspects of Dunkirk! And to rewrite famous Shakespearean quotes for my own nefarious purposes too.

It’s okay, I’ve got my flak jacket, I’m lying on the ground with my hands over my ears, and I’m primed for two weeks of fallout. Plus I’m British so I’ve put the kettle on to console myself with a mug of hot, sweet tea.

Because, er, there were women and people of colour at Dunkirk.

I loved Dunkirk. You don’t believe me? Check out my review here. I gave it 5 stars out of 5! Which puts it up there with John Wick, Train to Busan, Lady Macbeth and The Love Witch. All very different films but all extraordinary and groundbreaking in their own ways, while at the same time acknowledging a debt from movie makers who have come before them.

And Dunkirk is hardly just another war movie – its different timelines, seamless mix of breathtaking large scale spectacle with individual claustrophobic detail, extraordinary music and clever retelling of a well-known event see to that. And it does it all in less than two hours which for a busy person like me is a godsend. (Yes I said busy, so I’ll try to be brief.)

I saw Dunkirk in a packed and quiet cinema, where elderly people – who may just have been old enough to have been there – were helped to their seats by sons and daughters, walking sticks tucked away. They sat with young men and women who will never be called up or have to carefully count ration stamps before buying something in the supermarket next door. It was a moving film made more so by the rapt and silent audience.

Lots of people love director Christopher Nolan, and love Dunkirk, which means when dissenting voices appear – especially on social media – the wail of 140-character righteous indignation can sometimes rise up like an air raid siren above them (see what I did there).

But without the dissenters sticking their necks out, often to opprobrium, I, and probably lots of other people, would still be happily sitting here thinking Dunkirk was just about 3-400,000 white men.

I thought I knew quite a lot about WW2 – including the enormous contributions made by women and soldiers from around the Commonwealth – and a bit about Dunkirk, but before last week I didn’t know that the women of the Auxiliary Territorial Service (ATS – the women’s branch of the British Army from 1938 to 1949) were some of the last military personnel evacuated from the Dunkirk beaches. Telephonists, they were paid 2/3 of the renumeration a regular soldier received. With so many soldiers on the beach and a force of boats big and small approaching, plus German attacks coming from overhead, you need effective communications.

And I didn’t know that actually there were also Indian troops there on the beaches, several hundred of them from the Royal Indian Army Service Corp. These soldiers were in animal handling companies – mules were still needed for transportation purposes. (Many of these men were evacuated – some died in German POW camps.)

Several hundred women joined the ATS after 1943 arriving from the Carribean expressly for this purpose, often paying their own fare. I don’t know whether there were any women of colour at Dunkirk, though there may well have been (women weren’t called up for war work in the UK until 1941, but they could volunteer before this).

During the last few days I also found out from Twitter about the Scottish regiment the 51st Highland Division – who a few days after Dunkirk and still in Normandy fighting with the French army, were ordered to launch an attack on the Nazis. Outnumbered, they tried to retreat but Churchill refused and ordered them to carry on fighting – their escape route via Le Havre soon cut off. Thousands of these men ended up in POW camps and endured death marches across Europe.

All of these stories are fascinating (and far more complex than I can cover here) and all could and should be made into fantastic movies in their own right. Preferably from big name directors who can command big budgets.

Now I’m well aware of dramatic licence, and a sign that a film has really moved me is when my review is late as I’ve got home from the cinema and started researching the real life events, finding out what was left in or out, or which real life people were conflated into different characters.

And I agree that to tell the stories outlined above within the framework of Nolan’s masterpiece would have been a misstep. There’s nothing wrong with limiting the scale of the story you want to tell for clarity and structure, or simply to focus on a few particular individuals. And of course everyone portrayed on those beaches is important and will have had a story to tell. But I think that to exclude these small but often ignored groups from actually being there on the beaches too is also a misstep.

I’m not sure what the rationale is – lack of research into the actual events? That they are a distraction because most people don’t know they were there? That somehow seeing an Indian regiment or women with their telephony equipment will divert us from the story being told? In which case we might as well say that white men are the story. There are certainly stories to be told where that is the case. But to include the different groups that were there can never be a distraction as they are part of this story.

I’m willing to bet there are lots of men and women – including many who are sympathetic to better representation on film, where it’s historically accurate – started googling to back up their belief that this was a story about white men only to go “oh!” when they found out the truth. And I bet that lots of them then had a fascinating time digging a bit deeper and reading more.

I hope that the “other” Dunkirk stories do get told on the big screen, and those of the 51st Highlanders. How brilliant could those movies be? But I also hope that we can quickly get to a point where including people in these films who were there – no dramatic licence required! – is no longer seen as anything worthy of mention. Where a woman can be seen working as the long, snaking queues of men embark on the rescue craft, or Indian soldiers take an order from Commander and evacuation coordinator Kenneth Branagh. As well as simply being there, in the background, doing their jobs.

It also provides work for actors and extras who must sigh every time a film about war in Europe or with corsets (the fabulous Lady Macbeth notwithstanding) is announced.

Bored with all this? Me too! Trust me, I’m really busy with a to-do list as long as Doctor Who’s scarf. Tom Baker’s, obviously.

So let’s stop being amazed when people who aren’t white men do appear, as extras, or minor characters, queueing with the other soldiers, or being evacuated on the last few boats – and continue being amazed when they don’t.