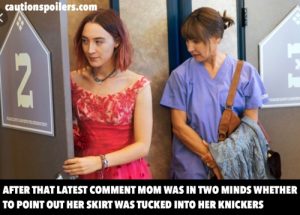 Naturally, being a woman, after all the acclaim it’s received I finished watching it thinking “is it me? It must be me.”

This is a straightforward coming-of-age tale, following a well-trodden path. In fact it feels like a typical 90s indie flick.

Set in 2002, Christine (Saoirse Ronan), known as Lady Bird, isn’t particularly endearing (which I liked). And her yearning to escape, combined with her frustration at her classmates’ lack of vision, will strike a chord with many teenagers (god knows we all think we’re special at that age. I know I still do).

Lady Bird (her given name as “I gave it to myself”) lives in Sacramento in California, and there’s a Joan Didion quote at the start to spell out to those of us who think California sounds like a place no one would want to leave, just what the city stands for: suburbia and inertia (or alternatively, “the midwest of California”).

She wants to go to college on the East Coast, where people are bookish and interesting, while all her friends are going to continue studying locally. Her mum (Laurie Metcalf) is shocked she’s raised a snob with no work ethic (” just go to City College and then to jail and then back to City College” she shouts as they argue in the car); her teachers are shocked that she thinks she can meet New York college entry requirements. (Her university rejection letters certainly struck a chord, reminding me of my own Lady Bird-esque moment when I confidently told an English academic, during an interview for a university place to study English, that I didn’t really rate Shakespeare.)

It’s entertaining, though it all feels very episodic. There are no huge events, just a linear narrative leading up to college, peppered with a selection of vignettes: first sex, replacing existing lovely BFF with new rich BFF, thrift shop prom dress, arguments, more arguments. That’s not necessarily a complaint; 16 to 18 is an extraordinary time even without any major traumas, and all these events are the kinds of experiences which can either be forgettably minor or hugely affecting.

Getting a part in the school show, soon Lady Bird’s time is filled with rehearsals and new boyfriend Danny – a young man so respectful, even when she invites him to touch her breasts he refuses.

Danny (Lucas Hedges) is confident and wealthy, peppering his speech with self-deprecating lines he’s surely used a million times before. Telling Lady Bird about his family, he says they are “Irish Catholic – it’s hard to find a girl to date who isn’t my cousin”. His privilege is such that his wonder at finding out there are people literally from the wrong side of the tracks is something he feels those very people are interested in hearing about, their existence fetishised.

Her first sexual experience is realistically rubbish: “Are you done? Sorry I was confused” she tells her partner, candidly admitting late to a friend that “I think I prefer dry humping”.

Lady Bird isn’t poor but some of her schoolmates are certainly wealthy, their houses straight out of Home Alone. And while a teen living in poverty isn’t going to lose any sleep over Lady Bird’s predicament, it’s true that living among people considerably wealthier and more privileged through no great deeds of their own is difficult, and frequently enraging.

The most affecting events, and characters, aren’t really Lady Bird-related. There’s a terrific and nuanced little subplot involving her best friend Julie (Beanie Feldstein), freshly pretty and slightly chunky, who develops a crush on their one hot teacher. He seems to have either initiated it or be encouraging the situation; it’s horrific but fascinating to see the subtle ways he leads her on, only to introduce her to his glamorous pregnant blonde wife later. It’s one of those tiny but crushing incidents which teach us the most unfair lessons, and stay with us longest.

I also liked Sister Sarah Joan (Lois Smith), head nun at Lady Bird’s Catholic school. Wisely protective of the young women in her care, she’ll have seen everything a thousand times before, while also being well aware of how her charges see her. Still, I bet nearly all of them look back on their time with her as a blessing.

Saoirse Ronan looks slightly too old in her regulation grey skirt and white top, though to be fair I think any 17 year old would look out of place in a school uniform – it’s usually your own clothes by that age, surely? She does though have the right blend of precocity and childishness, and her Lady Bird is a good mix of razor sharp nous, unwillingness to compromise on what she wants to say, and slight shock when she realises what has actually come out of her mouth.

Laurie Metcalf is brittly funny as her put-upon and imperfect mum, pushed by her daughter beyond a point where she can continue mouthing parental platitudes and now wanting, ever so slightly, to push back. There’s a telling exchange when Lady Bird accuses her mum of not liking her, who responds simply “of course I love you”. It’s a realistic portrayal of a loving yet antagonistic mother-daughter bond.

Lady Bird’s father Larry (Tracy Letts) is so underwritten I kept assuming her mum was divorced, even though he pops up regularly. He just doesn’t seem much of a presence, though his redundancy puts extra pressure on the family finances. Her brother Miguel (Jordan Rodriguez) and his live-in girlfriend are interesting but don’t appear much which is a shame.

The dialogue is fast-paced and whip-smart, in the way that young, witty women speak first without (thankfully, and long may this continue) thinking. But overall Lady Bird doesn’t seem to be either saying anything new, or saying something familiar in a refreshing way.

It did make me reminisce, though more about the coming-of-age films I watched in the 1980s than my own coming of age (and don’t get me started on my mother).