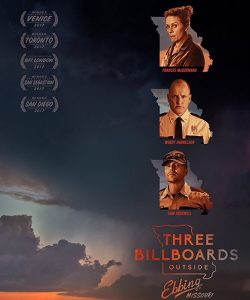 “You join the gang, you’re culpable,” says Mildred to her local pastor who has come to berate her for holding the local police force to account. She draws parallels between LA gang members being found guilty of crimes they didn’t commit because of group culpability, and joining a church where members are abusing altar boys.

In the eyes of Mildred (a blisteringly raw, grief-driven Frances McDormand) this gives him no right to lecture her about her actions, when neither he, nor her own ex-husband, nor most of the townspeople, seem bothered that in the months since the brutal rape and murder of her daughter, no one has been charged.

The pastor is there to complain about her billboards, pasted with huge posters questioning Chief William Willoughby (Woody Harrelson) over the lack of progress in the case.

Red Welby (Caleb Landry Jones) is the young ad man, unsure how much to charge for hoardings which haven’t been used since 1996. He’s not even sure what Mildred can write on them. “I assume… ya can’t say fuck, piss or cunt” says Mildred. “Or anus” he hurriedly replies. (And that sentence is a good test as to whether you will like this movie.)

Chief Willoughby, his name now visible in huge letters on one of those billboards, is going through his own kind of hell, with terminal cancer. Though one suspects he’d have responded to Mildred’s actions in the same way regardless. Much of the town supports him, outright or tacitly.

Those who support Mildred often do so because of their loathing of what the police, particularly Officer Jason Dixon (Sam Rockwell, brilliantly, violently pathetic), who tortured a black man in a cell, are allowed to get away with.

Dixon is utterly vile. An already violent racist, his reaction to losing his mentor after Willoughby’s death involves throwing a man out of a window (an upstairs one). Living with his redneck mother (a scary Sandy Martin) he is that classically volatile mix of rage, self-pity, and a massive inferiority complex.

Chief Willoughby is a great example of a white man getting a free pass, as soon as he shows his “nice” side, before and after his death. He’s not that pleasant at the beginning, but as soon as we see him with his sweet wife and innocent daughters, or hear him explain to Mildred with great reasonableness exactly why his department has done sod all about Angela’s death, everyone wants to pat him on the back.

Yet his post-mortem letter to Dixon is an extraordinary exercise in whitewashing a junior colleague who is guilty of horrendous racially motivated violence. It’s pretty obvious that Willoughby has been keeping Dixon around to do any dirty work required.

I have to say though, that Willoughby’s other letters are rather a hoot – I hope when I face my doom I manage to pen missives as witty, loving and, frankly, as screw-you as the ones he manages. “I gotta admit Mildred, the billboards were a great fucking idea” he writes to her, before delivering a brilliant confession (one that amply demonstrates what a fly in the ointment he is. Like Mildred he’s an irritant, though not for any greater purpose; he’s a classic disruptor, almost a troll, who knows exactly what he is doing).

The dialogue is aggressively funny during the first scenes, and often highly offensive (I’m a big fan of black humour at our darkest moments, though admittedly I no longer have any friends).

Visually it’s grimly humorous, too, as Dixon lists the two billboard complainants as “your lady with a funny eye… and a fat dentist”, before we cut to Mildred in the chair with a fat dentist hellbent on removing her tooth with no pain relief.

As Mildred’s action continues to send shockwaves through the town and her own family, Dixon at last does something good. He seems to be expecting redemption, but refreshingly when that doesn’t go according to plan he doesn’t immediately revert to his old ways (which often happens when men feel one virtuous action should lead to unconditional forgiveness). But we need to steer clear of overpraising a thug. Dixon isn’t redeemed, although he may become so later, and I’m not sure McDonagh (who wrote and directed Three Billboards) is saying that he is.

Three Billboards certainly faces down the town’s sexism – mouthy women who won’t shut up are always a particular annoyance, the expectation being that they should just be quiet so we can all move on. It’s notable that Mildred’s wife-beating ex-husband (and Angela’s father) tries to claim the moral high ground despite appearing to have done nothing to progress the search for the man who killed his daughter.

But bearing in mind this is about a woman advocating for her raped and murdered daughter, fully-realised female characters are thin on the ground and I’m tired of the dumb young woman trope.

And it’s disappointing, considering how much this is about race, that Denise who Mildred works with, and Jerome who puts up her posters, both of whom are black, reside on the edge as the story unfolds, only coming to the fore for certain things to happen.

Hardly anyone really moves on, or goes through any kind of journey (though that’s not a criticism) – it was a film that could have ended at several points and not surprised me.

It does feel play-like, particularly the flashback final conversation between Angela and her mother, pushed so far to make a point. In fact that conversation sums up the ups and downs of the film for me, with its mix of overly heavy irony and perfectly angry humour as the two women momentarily forget their vicious word fight to jointly round on Mildred’s teenage son Robbie when he uses the c-word. Overall Three Billboards feels like a piece of raggedly-edged knitting, bulky in some places and too loosely formed in others.

But McDormand’s and Rockwell’s perfectly realised performances, and the bleak humour, lift Three Billboards, as does McDonagh’s unwavering conviction that almost everyone is allowed to be flawed, particularly the person we are rooting for: Mildred’s a mess and lashing out, because doing anything is better than doing nothing. But she’s also instinctively driven, and is absolutely right that if someone is blocking you, you have to become enough of an irritant that it’s easer for them to do what you are asking than either do nothing, or work against you.