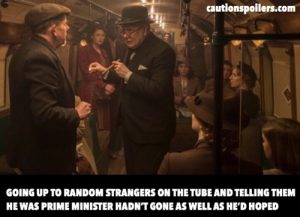 Let’s get it out of the way right now, Gary Oldman’s physical transformation into Winston Churchill is simply astonishing, and his performance absolutely Oscar-worthy.

This is the fourth film in a year covering some of the same WW2 ground, and I’d be lying if I claimed I hadn’t been concerned about Wartime Britain Fatigue setting in among the cinema-going public. Last year alone we had Their Finest, about the making of a propaganda film about Dunkirk; Dunkirk itself; and Churchill. I can only imagine the fights between props departments and wardrobe ladies over London’s last starched collar, or gas mask, or 1940s typewriter.

It’s May 1940 and we’re a long way from Churchill being seen as the saviour of the western world. Neville Chamberlain (Ronald Pickup), he who came back from meeting Hitler with a piece of paper in his hand, is dangerously damaged (and dying). Lord Halifax (Stephen Dillane) has refused the offer to be Prime Minister of the new coalition government, as he wants to bide his time.

The only man with the support of the Opposition (led by Clement Attlee, described by Churchill as “that sheep in sheep’s clothing” which is funny until you remember Attlee ousted the great man in the 1945 general election) is Winston himself.

Churchill isn’t trusted by his own party; for flip-flopping from Tory to Liberal and back again, and for his part in the First World War disaster at Gallipoli. Even the King (Ben Mendelsohn) doesn’t rate him, and on being told of his successes points out “even a stopped clock is right twice a day”, which is both my favourite and least favourite saying, depending on how much I like the person being talked about.

Winston is under no illusions about the offer, telling wife Clemmie (Kristin Scott Thomas) “I’m getting the job because the ship is sinking. It’s not a gift, it’s revenge”.

Even once he’s installed as PM (after a brutally, brilliantly awkward meeting with King George VI) he’s fighting on all flanks himself as so many of his war cabinet want to enter peace talks with Hitler. France has fallen, its army routed; Belgium is about to surrender. US president Roosevelt, whom Churchill phones from the loo in desperation, pretends he’d like to help but new laws prevent him. The UK really is on its own.

Churchill’s answer to this is to make a public broadcast lying to the public about the perilousness of the situation in France, and to be fair he is as shocked as everyone else at the Nazis’ advance (and had been completely unaware that to refuel a German Panzer tank one simply stops at the nearest petrol station).

But as the situation at Dunkirk deteriorates, amid swirling rumours of a German invasion, Churchill has to either bolster his position or accept peace talks.

Reviewing any film about a great orator, it’s easy to spend the whole movie simply scribbling down quotes. And Darkest Hour is, where Winston is concerned, quote heaven, whether in speeches or off-the-cuff. Assuming Lord Halifax hadn’t been offered the PM job, he states confidently “Halifax is the fourth son of an Earl. Fourth sons turn nothing down”. Locked in the loo while someone shouts through the door that he needs to speak to the Lord Privy Seal, he shouts back “tell the Lord Privy Seal I’m sealed in the privy!” (And if that’s not the ultimate 1940s privileged white man joke then I don’t know what is.)

But let’s admit it, most of us are waiting for the big speeches. How you prevent their delivery falling into parody, is, like the dilemma facing every Danish prince who has to say “to be or not to be”, more tricky. So director Joe Wright has secretary Elizabeth Layton (Lily James) typing away in flashback, while Churchill is actually making the speech in parliament.

Churchill may be rallying the public and his colleagues in the name of freedom but Darkest Hour also shows how far we still had to go then. I spotted one woman on the parliamentary benches; Whitehall’s government map room is men-only; and all those public school-educated politicians make fun of each other’s speech impediments. On the plus side, all those public school-educated politicians mean everyone uses the word “whom” correctly.

And if the success of a few women-centred films has left you sobbing into your own manly shoulder, than fear not, as the ever growing roster of Churchill films, with their big parliamentary speeches and debates (lots of men on the benches shouting and waving their hankies, basically), mean that middle-aged white male actors who can look patrician in a starched collar or suitably stoic in a brigadier’s uniform should never be out of a job. (Though surely the time is right for Judi Dench to play our greatest wartime leader?)

Wright makes good use of overhead shots, which, while tracking back from an intimate view to a wider one, also serve to show the separation between the mostly old men in Whitehall making the decisions and the ordinary people bearing the consequences.

Oldman’s performance towers over everything – his Winston is as full of self-doubt and fear as he is of hubris and bombast (“words, words, words alone” says Halifax contemptuously).

And Kristin Scott Thomas is the perfect embodiment of his wife Clementine: kind yet clipped, accepting no rudeness but clearing adoring him. Lily James is perfectly fine as Elizabeth though the role of Winston’s typist is verging on cliche now. Most interesting when she’s laughingly telling the great man that his initial back to front V for Victory sign actually means something rather more crude, she seems earthier and more real then.

Some of the non-Winston dialogue is a bit clunky at times as they struggle to get in enough exposition. And Winston venturing onto the London Underground to meet the people just didn’t work for me (I am a miserable old cynic though, and if anyone speaks to me on the Tube I assume they’re a serial killer, even if they claim to be Winston Churchill).

But overall this is a powerful and remarkably tense film, quite a feat considering we all know what happens in the end – I was definitely chewing my nails, when I wasn’t sobbing at the flotilla of little boats heading for Dunkirk.

Anyway did I tell you how astonishing Gary Oldman’s physical transformation into Winston Churchill is?