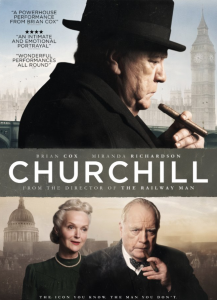 I’m always slightly wary of portrayals of Winston Churchill as they usually result in me finding out I’ve been misquoting him all these years.

But though Churchill isn’t a great film, it’s worth seeing purely for Brian Cox’s extraordinary and powerful portrayal of Winston. Arrogant and egotistical, here he’s a man who arouses both exasperation and sympathy – something that could also be said about the film itself.

It’s June 1944 and plans for Operation Overlord, the attempt to liberate France from Nazi occupation in World War II, have already been in place for weeks when Churchill decides to put his foot down. Allied Forces leaders Eisenhower (John Slattery) and Montgomery (Julian Wadham) are happy with the plans until Churchill arrives in a morning suit on a sunny summer day to try to delay the operation, convinced it will be a disaster and lead to massive and unnecessary loss of life. They are alternately bemused and angered by his behaviour, especially when he tries to rope in George VI (James Purefoy, portraying the King as a man easily swayed).

Winston is a conundrum here. Next to the lean and rangy Allied Forces leaders, immaculate in their uniforms, the great man looks old and tired. Never up before noon, drinking scotch all day, he looks well past his prime and appears to be fighting an old war all over again, hoping that this time he can change the outcome.

Suffering flashbacks on the beach back to Gallipoli in 1915 when the surf ran red with the blood of cut-down First World War soldiers, he is adamant that it must never happen again – partly because he feels he bears some responsibility for what happened then. “It was meant to be a little job”, he says, horrified to admit that “I was its champion” as he tries to atone after 30 years.

In fact Churchill is reminded several times that war has changed since a generation ago, but he is also supporting, as he see it, the common man, the ordinary soldier – who will die if the leaders have got their plans wrong. To dismiss his worries is, to an extent, to dismiss them, and looking at the patrician Monty you can see that happening – the military man comes across as less concerned with his men’s safety than he might be. And he can be snide: “MISTER Churchill” he greets the Prime Minister outside on the lawn as they await the arrival of the King.

There’s an unnecessary subplot involving Churchill’s new young secretary Miss Garrett (Ella Purnell) who gives an impassioned if unbelievable speech about her family and the effects of both world wars on them. Unbelievable not because she wouldn’t be capable of such oratory but because most people just don’t speak like that – unless they’re Winston Churchill.

And the most interesting scenes are listening to him working on his speeches, debating with himself on which word to use. So much rests on a turn of phrase – pride or valour? Pride AND valour? Though he doesn’t take suggestions well, or interruptions: “I am choosing between ‘trials’ and ‘tribulations’, please stop adding to them!” he says, in probably my favourite line from the whole movie.

His closest confidants also think he is interfering and meddling, particularly South African military leader Smuts (Richard Durden),who Winston has known since they both served in the Boer War, and his wife Clementine (a wonderfully touching but forthright performance from Miranda Richardson) who is his greatest supporter while at times being as frustrated by his behaviour as everyone else. “I’ve learned to live around your edges” she tells him.

Operation Overlord is temporarily delayed by the weather (and you couldn’t get more British than that unless they’d all been laid low by a batch of poisoned scones). Bolstered by this brief, god-given pause Churchill is emboldened to ask for more, in the manner of a religious Oliver Twist. But praying for more rain, he doesn’t pray for rain like we would, but in a long, flowery speech, so impassioned that I was half-expecting thunder to clap and lightning to crack apart the sky in a sort of instant divine response.

The pace of the film is as stately as Winston – using a cane and constrained in his tight morning suit – himself. It is an interesting study of the great wartime leader but it lacks tension as we know that the operation did go ahead, and France was liberated. And at times the story moves quickly from spat to parody: “the last time you spoke it was doubt, dithering, and treachery” says Monty to Winston, who wants to address those of Monty’s troops who haven’t yet set sail. But Monty’s own attempts to raise the spirits of the young men, and their answering back almost as one, seems less a lesson in inspiration and more like a scene from Monty Python.

There is rather too much exposition and obvious anguish either in conversation or spoken out loud to himself: “I mustn’t let it happen again” Winston mutters, as he stands watching the waves on a vast and empty beach. Well no, as the previous war was supposed to be The War To End All Wars.

Cox’s performance is incredible though, and he really informs Churchill with a sense of loss, and desperation. Partly because of his ego (and what powerful, successful leader doesn’t have one of those?) but also to atone for the past. Watching him struggle with depression – the famous Black Dog – is also very moving. Knowing as we do what is to come, his ousting from power in Clement Attlee’s landslide victory just a year later in 1945, adds even more pathos to his desperate attempts to hold onto power and relevance.