You are here: Home / Film Reviews / The Shape Of Water 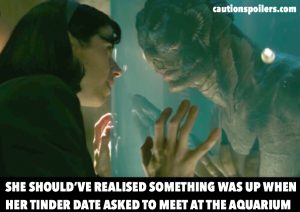 This is an ode to gods and monsters, and fittingly it is set in the early 1960s – when America has become used to strange creatures on screen, warning us of our failings as a species, or terrifying us into submission.

And with so many B-movies allegories for East-West relations, it’s also appropriate that The Shape Of Water mostly takes place in a top secret facility hidden far below Baltimore, where the cold war is fought by military men with scientists in white coats their proxies, while women clean up the mess. Two of those cleaners are Elisa (Sally Hawkins) and Zelda (Octavia Spencer).

Elisa was a water baby – found by the river, she still has the vivid red scars on her neck where someone sliced her vocal chords, leaving her mute. Even now her life is surrounded by it. Her morning bath, where she masturbates with increasing speed, though never fast enough to be on time for work; water bubbling around her eggs in the clear glass pan on the stove. Even her apartment (situated above a cinema) looks water-damaged, the paintwork patchy but never redecorated; her huge bathroom is aqua-tiled but dotted with mould and rust.

She seems to live much of her life in her own head, emerging only to watch TV at her neighbour’s, or go to work, where Zelda translates Elisa’s signing, and clocks her in when she’s running late.

Guillermo del Toro’s latest work is “a tale of love and loss and the monster who tries to destroy it all”, where the monster is Colonel Richard Strickland (Michael Shannon), the head of security for whom torture is no longer even a method of information gathering but just another way to pass the time. Strickland has brought back a creature from the Amazon, a half-man half-fish hybrid, worshipped as a deity by locals there, but now held prisoner and known simply as The Asset.

Its moans echo round the utilitarian corridors as Strickland gets to work, though soon they’re surpassed by his own screams, as fingers become fishfood.

Asked to mop up the blood, Elisa finds one of the severed digits on the floor and decides to store it for safe-keeping in her crumb-filled lunch bag; making its surgical re-attachment a procedure carried out more in hope than expectation.

Life has also left him unsure of men’s cues: “d’ya think he meant it?” he asks Elisa about the bakery counter server, who bids them farewell with what is clearly an oft-repeated “you all come back now!”

In the bunker, Elisa is visiting the creature’s room frequently, feeding him hard boiled eggs (so many eggs! Soon he’ll be needing a dose of Mr Kellogg’s famous All Bran) and playing him music. (It’s not clear why Elisa has such easy access – then again this is a fantasy about a man-fish hybrid so let’s not dive too deep.)

But now the military has him. He’s only useful if he can be weaponised, and the current battlefield between the USSR and America is in space. The Russians have already sent a dog into orbit, but no one wants to send a fish – instead they consider euthanasia and vivisection.

A rescue plan is devised: Elisa, Giles, Zelda, and a scientist who is also a Russian spy, all in their own ways fish out of water. They’re a motley assortment, leaving clues everywhere – criminal masterminds they are not, though it certainly helps plot progression.

But soon he’s ensconced in Elisa’s bath, salinated with table salt. As they wait for the torrential rains that always come at this time of year, when the creature can be released into the canal that runs to the sea, Elisa and Giles take turns to sit with him in the bathroom.

In a way he’s a receptacle for their reminiscences and their dreams of escape: “maybe we’re both just relics” Giles says to him, making the most of the fact that, like Elisa, the creature can’t speak. But Giles dozes, and the creature decides to explore the apartment, and that’s the end of Pandora the cat.

If the creature is, at heart, an animal (assuming poor Pandora’s demise wasn’t revenge on behalf of all fish), how much of him has Elisa created in her own head? Soon she’s singing and dancing like in the movies, blurring that line between reality and fantasy. And like all the best fantasies (so I’m told!) this one is x-rated. Her signed description for Zelda of the consummation of their relationship is actually one of the sweetest scenes in the film as well as the funniest, when a lost soul finds her soulmate and it doesn’t end for her when the screen fades to black.

This is a lovingly made film and (mostly) a joy to watch, though some of the scenes of torture – while nothing like as bad as some you’ll see – are understandably upsetting. And if you’ve ever had to run around looking for towels when the washing machine floods the kitchen you’ll be wincing as Elisa decides to invent the world’s first wetroom.

Shannon’s portrayal of Strickland, particularly his descent into obsession in his pursuit of the creature – albeit one facilitated by his military bosses’ demands – is scarily spot on, the torture of the security chief’s rotting fingers a constant agonising reminder of that first, lost, battle. Spencer too is terrific as Zelda, a woman far too bright for her job and her husband.

At its simplest, this is an old fashioned (by which I mean unsanitised) fairytale, a fantasy love story jagged with pain, where the woman often has to do the work and take the risks.

And Hawkins is a charmingly exquisite force of nature as the young woman (I keep thinking of her as young but the actress is in her early 40s – it must be Elisa’s youthful guilelessness) who isn’t lonely so much (she seems quite happy in her own head) but who is proactive in her search for love and companionship when the chance arises.