You are here: Home / Film Reviews / Call Me By Your Name 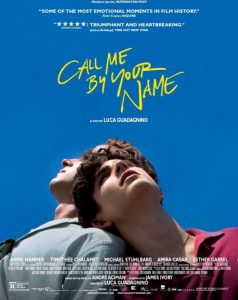 Languid is a term made for Call Me By Your Name, as well-off couples and teens lounge around indulging their pleasures (food, academia, poetry, cigarettes) but meanwhile everything is happening below the surface.

Literally at times, as they jump into old stone swimming pools or bring up long-lost statues from the deep of Lake Garda.

And figuratively, as two young men explore their sexuality and try to understand their burgeoning relationship.

Elio’s family is Italian-French-Jewish-American, with a huge inherited house just outside an Italian town. It’s the 1980s, and each summer they holiday there and invite over an academic to work with Elio’s dad for a few weeks. This year it’s Oliver (Armie Hammer), a tall, broad blond from New England.

Though 17 year old Elio’s family is Jewish, his mum Annella (Amira Casar) generally tries to keep that fact under wraps; they are “Jews in discretion” she has told her son. It’s only when Oliver arrives wearing a Star of David pendant round his neck that Elio digs his out too.

With no mobiles or iPads people write and listen to cassette tapes all day, constantly smoking, driving in cramped Fiats with no seatbelts. So there’s ample time and opportunity for Oliver and Elio to get to know one another, even allowing for Oliver’s assistance with Mr Perlman’s academic archeological and artistic pursuits.

Oliver takes the lead as they tentatively work out who they each are. He’s far more confident and far more worldly, and seems to use the teen then rebuff him, requiring Elio’s presence on bike trips into town then leaving him with a casually rude “Later!”

Elio does manage to respond in kind, batting back Oliver’s criticism of his piano playing with pointed wit. Oliver may have shown Mr Perlman that he knows more about the etymology of the word “apricot”, but Elio is the musical expert here. And Elio’s mother tells him that she thinks Oliver likes Elio more than Elio likes Oliver.

Meanwhile Elio’s romance with French girl Marzia continues. Poor Marzia – she thinks they’re equals in their budding relationship, but she’s almost his sex proxy, to be played with while he works out what the hell is going on with Oliver, and in his own head.

I can’t say I warmed to Oliver. His actions are certainly contradictory. At times he’s toying with Elio, while at others he seems to be acting out of protectiveness. After their first pondside kiss he points out they haven’t done anything to be ashamed of if they stop now. Oliver is in his 20s and this is 30 years ago, when gay relationships were often still hidden, so you can understand his concern.

But his general manner towards pretty much everyone, including Elio, is incredibly arrogant, even though he’s a guest in their house (and has taken over Elio’s bedroom, relegating the 17 year old to another room).

Oliver also has a brief summer romance but though she’s smitten he simply starts avoiding her. He does soften as the summer goes on, and takes being gently upbraided on his natural rudeness with good humour, but Oliver is a man who I think would always initially be more admired and envied than liked.

I do love coming-of-age dramas where people are wealthy enough or young enough to have the luxury of pottering around all day, eating delicious meals prepared by someone else, whether Edwardian ladies playing croquet in long white dresses hiding under white parasols, American teenagers biking in the woods, or, like here, relaxing in 1980s Italy.

The setting is more effortless than Elio and Oliver’s rather staccato unfolding relationship. You would have had to tear my rara skirt from my lace-gloved hands back in the 1980s, though this being Italy everyone looks as naturally fashionable as ever. The dancing at the town disco took me back 30 years to when I happily waved my arms around with un-ironic abandon before raves and the sardonic shuffling of 90s Britpop pushed that unashamedly feelgood music aside.

There are also references to the political scene in Italy, though frankly I have always found Italian politics so incomprehensible – by the time I’ve worked out who’s in power it’s all changed – this didn’t help me much. (The mealtime scene where friends chatter at a million words a minute about politics and cinema is a total joy though.)

James Ivory wrote the screenplay and it is both touchingly simple and accessibly intellectual. The scene where Elio snuggles into his mum while she ruffles his hair, dad sitting next to them, is mesmerisingly beautiful. Cuddled up on a sofa in the library of their home, Annella reads them poetry in German, before translating it into English for them – the story of a knight falling in love with a princess, but should he say something to her, or die? Only a few movie scenes really stay in my mind each year but Amira Casar is so brilliantly naturalistic, her character so unassumingly clever and unassumingly motherly, this will surely be one that does.

I did find the film rather too languid. Elio and Oliver take an age to get together considering their proximity (though it’s the kind of movie you can happily lose yourself in, especially on a blustery autumnal day). Then again maybe I was just a fast mover back in the 1980s (when my cry would’ve certainly been a more plaintive “just call me!”).

But that scene near the end, when Mr Perlman, who knows exactly how the summer has affected his son emotionally, puts the teenager’s new experiences into the context of his youth, is a near-perfect ending to a story about first love.

Guadagnino also directed A Bigger Splash, and like that other Italian summer-set movie the scenery here has a character of its own. Orchard trees almost buckle under the shimmering weight of those gorgeously plump apricots; town squares with ancient buildings are dustily empty in the baking afternoons; bicycles career along slightly too narrow roads under blue skies; hidden ponds of ice cold water nestle amid thick reeds and thicker trees.