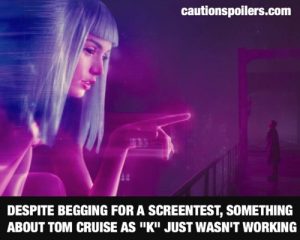 This is a bleak future, both burning and frozen. Roger Deakins’ cinematography is extraordinary: the sky is by turns orange with a red sun; white, as pretty snow falls onto monolithic buildings; or black as that mind-drumming rain returns to drench brightly-lit tower block windows.

Inside, everything is functional. Outside, giant adverts featuring naked women are the new opiate of the (male) masses.

After a communications and data blackout nearly 30 years before, redevelopment is underway, though the world remains a wasteland. A place where a picture of a dead tree is so unusual a young woman responds “I’ve never seen a tree, it’s pretty”. And it’s a flower, left under that tree, that makes blade runner K (Ryan Gosling) investigate further to see what might be buried underneath.

K is a new type of obedient replicant: “I never retire my own kind because we don’t run”, he tells Sapper Morton (Dave Bautista), just before retiring (that is, killing) him.

The tree is on Morton’s protein farm, polytunnels where he raises grubs for the public and garlic for himself. Wallace Corporation, headed by Niander Wallace (Jared Leto, a hipster Jesus with a god complex) has, since the blackout, focussed on intensive farming to feed the population. Wallace has also bought the remnants of Tyrell Corporation, and continues to create replicants for off-world slave labour, aiming for the holy grail, one that reproduces. Only then can replicants be created fast enough for the colonies’ needs.

But what is found under that tree is powerful enough to send shockwaves reverberating so hard through society it could start a war. In a box are the remains of a woman who died giving birth. Who, and what, is she, and where is her baby? It certainly reverberates with K: “to be born is to have a soul” he tells his human boss Lieutenant Joshi (Robin Wright).

“That’s what we do here. We keep order” says Joshi, which makes her sound more replicant than human, a neat twist on “more human than human”. With short, slicked back hair, no make up and the same black outfit day after day, Joshi is built for function. We never find out anything else about her.

At home, K has a companion, hologram Joi (Ana de Armas), a beautiful young woman but a depressing one, created purely for men’s pleasure. de Armas plays her with wide-eyed guilelessness, and it’s hard to remember Joi is programmed. (Though to be fair even in humans, saying I love you is often meaningless.)

What do the men, human or replicant, who possess these holograms think? Don’t they care as long as they get their new dinner recipes and pretty fake girlfriend, or are they constantly in a state of cognitive dissonance, wanting to believe but reminding themselves it’s smoke and mirrors?

But K is not as obedient as he thought. And though a search for the missing child and the identity of its mother is sanctioned by Joshi, what she wants him to destroy, he wants to discover. It’s a search that takes him to what looks like a radioactive Las Vegas, and a meeting with another blade runner.

Having Harrison Ford back as Deckard is like meeting an old friend – a rather grumpy old friend, and it’s a long wait, but as the film is nearly three hours we still get lots of him. He’s wonderful, though I’m still not sure if he was playing Deckard or Harrison Ford. “Sometimes to love someone you got to be a stranger” he tells K, showing him the reality of being a replicant on the run, when leaving your loved ones is the only way to show you care.

Leto is barely there. More interesting is Luv (I hope that name’s a Northern joke but I suspect not). All the women are interesting, partly because we don’t find out much about them.

Luv (Sylvia Hoeks) is a replicant, Wallace’s assistant (an angel, he says) and who Wallace sends to put an end to what K has found. She certainly carries shades of Blade Runner’s Rachael: less stiffly 1950s, she still has a fitted outfit and a dark glossy pony tail. And Dr Stelline, the world’s best memory maker, whose sad story has led directly to her life’s work as she sits in her sterile white bubble, creating dreams.

Nature is there in tiny fragments: green-stemmed yellow flowers on the grave, garlic-infused cooking on Morton’s stove. Religion though, is everywhere, as befits a movie produced by Ridley Scott, who directed the original and has been giving us allegory-drenched aliens and androids for years. CEOs playing god, creation, souls, apocalypse, replicant angels, and presumably fallen angels too.

But is Blade Runner 2049 misogynistic? Yes and no, the yes being by default.

It’s certainly shining a light on the misogyny of this particular dystopian future. Villeneuve shows us how women are treated in a super-patriarchal and otherwise divisive society, where Wallace wants to create women who can give birth to slaves, and men have access to (and, let’s face it, are kept busy with) the hologram of a perfect woman. And that’s important, as so often there are traces of the present in these frightening futures.

But it’s a world that’s only half-created. There’s a wasted opportunity to show more of women (replicant or not), which you can do even without making them the main story. Does Joshi go home to a male (or female) hologram at night? Perhaps one who not only can become temporarily real to have sex with her, but wants to?

There’s no real exploration of women, or of the differences in what it means to be human, or replicant, for a woman versus a man, in this society. And I wish more of the long running time had been devoted to who the women are, rather than what they are and what they do.