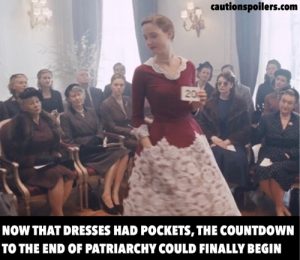 To paraphrase Emily in The Devil Wears Prada, it turns out I’m just one wild mushroom omelette away from my goal weight. I never collect mushrooms in the great outdoors, as I’d rather not risk death for size zero, though it makes a change to see food used as a weapon against a gourmand fashion designer rather than the models.

I’ll be honest, after hearing so much gushing over the exquisite craftsmanship of Phantom Thread, my first thoughts as I sat in that darkened cinema were that it was a beautifully-made but emptily mannered drama.

And I was bored with the idea of watching a man given endless time and space to indulge himself and then having to listen to him whining when he doesn’t get exactly what he wants. I’ve got two small boys, I can get that at home.

But later events turn expectations inside out, and a relationship about designer and muse turns into something far more equal, more interesting, and more dangerous.

Reynolds Woodcock (what a name!) is a 1950s couturier, living in a tall, soulless and chilly-looking London townhouse. His sister Cyril (Lesley Manville) lives and works with him, though their relationship is more one of a long-married couple where she indulges his flirtations because she knows she’s in charge. And no one does pursed, edge-bleeding matte-red lips like Manville.

Reynolds has been so indulged he berates a woman who shares his breakfast table (and presumably his bed) for buttering toast too noisily, while she’s “waiting for you to fall in love with her again”.

He’s a man with a big appetite, though still so fussy and pernickety he probably keeps the shells from his not-too-runny poached eggs and scatters them round his feet for the women in his life to tiptoe on.

It’s on a trip to an English seaside town that Reynolds meets Alma (Vicky Krieps) serving in a cafe. He gives her the world’s longest breakfast order, which I didn’t write down but included, from memory, sausages, bacon, poached eggs (“not too runny!”), toast, and scones with cream and jam, all washed down with a cup of tea.

He takes her out to dinner, where he wipes off her lipstick because a man who creates armour of his choosing for women also likes to remove that which they chose themselves.

Soon he’s building dresses around her, which she then models in airy Edwardian rooms in front of the society ladies who can afford his creations.

Breakfast time is still a time of silence, and she quickly learns the art of noiseless buttering. But Alma certainly isn’t the kind of woman who will keep quiet about her own opinions (it’s almost as if some men look for women who can hold their own then systematically try to silence them. Oh wait). But she persists, as we say nowadays. Even in the face of a warning from Cyril not to carry out a planned surprise dinner for Reynolds, Alma does it anyway and predictably it’s a disaster: “an ambush” he moans, then whinges at having to show “gallantry” when he hates the food and hates surprises.

He’s not all bad. When he’s working, intrusions can make him lose his thread in every sense, so when Alma surprises him with a pot of tea in his workroom his frustrated cry, even as she removes it, that “the tea is going, the interruption is staying!” is understandable.

But the easily-irritated will always be miserable. And Reynolds has made himself a cliche, mythologising his late mother in the wedding dress he sewed for her while a stream of rich older women and young malleable muses glide through his home and his life and out the other side, none ever matching up.

I’ll give Alma full marks for not backing down though. “I’m trying to… love him in the way that I want to” she says, about the immovable force who wants her to submit.

The dresses are a delight, personality as armour. And – oh joy – one gown of dark red overlaid with thick lace even has proper pockets. This is the 1950s and it’s fitting that in a society going through its last gasps of formality and structure, Reynolds’ dresses are made with stiff fabrics that give their wearers protection for the battles that lie ahead as much as they constrict and conform. Truly the definition of day-to-night dressing.

And those bosoms! Alma is told in no uncertain terms that she has no breasts (though he can provide them; if he chooses, he notes).  While a wedding dress made for a princess (the best kind of wedding dress, in that I couldn’t decide if it was gorgeous or hideous) is built to force the bride’s breasts out so far she’ll look like she’s about to fire off torpedoes as she glides down the aisle. Surely a metaphor for marriage as Mutually Assured Destruction.

Beauty is terrifying for some men because it can’t be controlled, so it’s not surprising that Phantom Thread is about control and structure. It’s still a trade sold on beauty though; one of the saddest scenes is when the hugely rich Barbara Rose arrives for her fitting, trying on her dress before stating simply “I’m still ugly”.

But the 60s are only half a decade away, and it’s going to be 30 years before his kind of weaponised female fashion returns with power suits and shoulder pads. Reynolds doesn’t understand why the tide is turning, as he rants about his loathing of the word “chic”.

Despite Reynolds’ anguished prissiness, this is a funny film, often excruciatingly so (how deliberately noisily can one pour a glass of water?), with wonderful barbs thrown in by Cyril: “you have the ideal shape. He likes a little belly”.

Day-Lewis is sublime (and sublimely annoying) as the handsome and childishly self-righteous designer, his vocal tone pitched at a level which makes it hard to argue with him. And Krieps’ self-possession up against Day-Lewis mimics Alma’s success in finding a way that she and Reynolds can stay together without compromise.

Manville imbues Cyril with poignancy and sadness, moving from driving seat to spare wheel, and now on the way out too. There comes a point where she has to stop assuming every muse is just visiting.

You could call Alma’s eventual actions revenge but it’s more a rebalancing. She achieves what none of his previous women have – making Reynolds fall in love with her again as he becomes both her patient and her victim. And there’s always that frisson to their symbiosis – is this the time she’ll take it too far?