You are here: Home / Film Reviews / The Florida Project 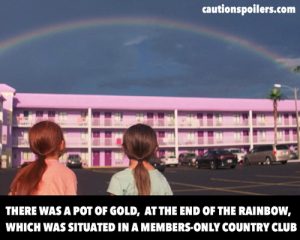 The Florida Project (the name comes from the Disney corporation’s name for Disney World while it was in development) is a gorgeous and glorious, fun and funny child’s eye view of life in the shadow of the Magic Kingdom, its darker side never shirked from but presented as a simple matter of fact.

In the way that children make the best of everything, they rarely let real life get in the way of their imaginary play, then finish most days with a giant shared ice-cream.

Whether exploring an abandoned, brightly-painted, supposedly haunted house (in reality another modern but collapsing housing block – “this house was built hundreds of years ago!” says Scooty, delightedly), or looking at cows in a nearly field (a safari, Moonee calls it), it’s their own private Disney World, hiding from the adults in plain sight.

The colours mimic the expensive, cartoon equivalent just down the road – bright blue sky, vivid green grass, an azure swimming pool, and of course the hotel itself, named The Magic Castle and painted purple and mauve.

It’s always sunny at Disney World and seems to be almost always sunny outside it, which must help if you’re living in a small room that you have to keep tidy, children climbing over each other. Would I let my 6 year old play out all day? No, though it’s always raining here. My mum probably did let me, back in the 70s, and mothers the world over tend to cop the blame either for keeping our children inside or letting them roam free.

The Magic Castle is managed by Bobby (a quietly affective Willem Dafoe), a wiry man running at full-tilt to keep everything in check. He’s a one-man Wack-A-Mole, brimming with exasperation at several of his residents, his battles to keep his hotel on the right side of the law, and concern for everyone living there, particularly the children.

Moonee lives with her mum Halley (an extraordinarily watchable, and believable, Bria Vinaite), whose life is chaotic; and in the hierarchy of the building she’s seen as less in control than (and by) other mums there.

Halley’s limited options mean her actions to help her daughter push them both closer to the edge – anyone would think it was a deliberate attempt to keep families in their position down.

Ashley (a quietly confident Mela Murder), Scooty’s mum, has a job at a diner and smuggles out free food to Moonee and Scooty. Until Moonee, Jancey and Scooty go too far in their destructive explorations of local buildings, and Ashley decides Scooty can’t play with the others any more.

Shot from the children’s perspective, it is easy to fall into a false sense of contentedness, until the kids themselves brings us back to reality: “the man who lives in here gets arrested a lot” they say to a friend as they go past a series of room doors in the block. Another woman thinks she’s married to Jesus. When a strange man approaches the children and their friends playing on the grass outside the hotel, it’s Bobby who comes to their rescue, seething with rage.

I say residents, but while everyone who lives here is pretty long-term, Bobby has to be ruthless in preventing them gaining residency rights. Once a month they have to clear their room, and stay in a neighbouring hotel for 24 hours. Bobby has reciprocal arrangements with the managers of other similar blocks, so guests get a cheap deal for that one night, until new owners take over one nearby, and refuse to honour them.

I couldn’t help but admire Halley, a powerless woman claiming small victories where she can, whacking her used sanitary towel onto the outside of the lobby window before she storms off, having been refused a night at that other hotel.

And you can’t fault her for trying to improve her life, hawking knock-off perfume in parking lots, or charging huge breakfasts in a “proper” hotel to a random guest’s room.

But despite Moonee’s fun-filled life, with her friends or hanging out with her mum as she flogs those fragrances, Halley – brash but not as tough as she makes out, cunning but not quite as cunning as she needs to be – is on a downward spiral. And despite their burning love for each other, Halley succeeds as a friend to her daughter but not really as a parent.

Moonee has a wickedly rude joi de vivre that never seems cliched; and her mutually reliant friendships are genuine and delightful. Her winningness is testament to both the script and Prince’s performance, considering we first meet her spitting from a balcony onto someone’s car. She even manages to create a situation where the victim’s granddaughter begs to help her clean the car that Moonee spat on.

But she’s already lost that sense of expectation and fairness, living in the moment. “I wish I had a bigger stomach” she simply sighs, cramming in as much delicious food as possible as she and her mum consume that illicit and enormous breakfast at a tourist hotel.

At times Moonee seems wise beyond her years (how else does she know to remain inside her imaginary kingdom?); it won’t be long before she’s the one looking after her mum.

Brooklynn Prince is hilariously expressive as Moonee, funny and free. Which makes all the more heartbreaking her gradual realisation about why the nice women from the children’s department are there. Moonee’s desperate tears, after we’ve got used to her happy-go-lucky demeanour, are brutally affecting.

This account of young lives in poverty leaves one alternating between laughter and rage. And the children are easy to adore; would we be so sympathetic if we were following the three kids at 15? If not, why not?

Still, director Sean Baker’s characters allow no room for sentimentality as the film follows them through their daily lives, real and imagined, in the shadow of the greatest make-believe we’ve ever seen.