You are here: Home / Awards / Oscar nominations revealed… and “Congratulations to those men” 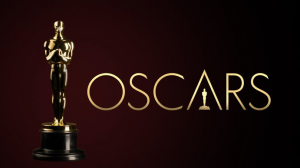 That quote is from actress/writer/director/creator Issa Rae, after announcing the all male Directing nominations line up. And the nominations taken as a whole do feel uninspired (whether we should have expected more is another matter).

Joker leads the pack with 11 nominations, including Joaquin Phoenix for Leading Actor. The Irishman, 1917 and Once upon A Time…In Hollywood have 10 noms each, Parasite, Jojo Rabbit, Marriage Story and Little Women each have six nominations, Bombshell and The Two Popes have three, and Harriet has two.

While the main categories are more diverse than BAFTA’s last week, it’s not by much – there are some head-scratching omissions. And we can’t say that the films, or performances, aren’t there to be nominated. At a time when the Academy has been working to improve voter diversity and representation, it’s jarring to see those gaps.

Maybe the make-up of the Academy hasn’t – yet – changed enough (and change can take a while to take effect). Maybe conversations around films (and online it’s easy to retreat into echo chambers of people who tend to agree with us, even if we don’t mean to) mean we’re convincing ourselves that members of the Academy think like we do. (Let’s face it, if the Academy thought like me, there would be a Stunt Co-ordinator Oscar, and I’d be hosting.)

Though even if these things are true, I’d still expect Greta Gerwig to get a Directing nomination for Little Women. (I liked it but I wasn’t a huge fan; I felt the same about Lady Bird. Maybe Gerwig’s films will never click with me. But I was still surprised she wasn’t there.)

You can check out some of the nominees – and the missing – below. And congratulations to everyone nominated – despite the controversies, there are some fabulous movies, documentaries and shorts recognised, and some amazing technical achievements and performances. (For the full nominations list, head over to Oscars.org.) 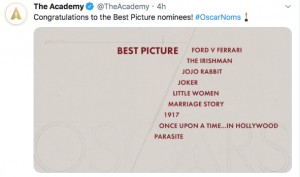 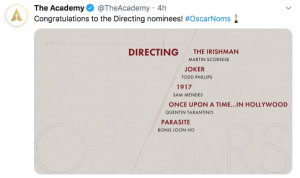 There is only one non-white nominee out of all four acting categories: Cynthia Erivo, who is up for Leading Actress for Harriet, the biopic of abolitionist Harriet Tubman. Surprising omissions in that category include Golden Globe winner Awkwafina (The Farewell), Lupita Nyong’o (Us), and Alfre Woodard (who is superb in Clemency). Missing from the Best Supporting Actress category is Jennifer Lopez (Hustlers).

There are some really great choices among the nominees, too. Parasite (which I’ve seen but not reviewed yet) is as good as people say: funny, frenetic and super-tense. Director Bong Joon Ho is nominated for Directing, and the South Korean movie also has nominations for Best Picture and International Feature Film. Sadly its performances didn’t result in nominations in the acting categories (maybe the Oscars needs an ensemble cast award?) 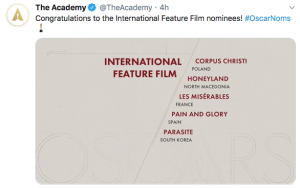 Renee Zellweger gets another nod for her role as Judy Garland in Judy, a week after she won the Golden Globe. The film is so-so but her performance is mesmerising, and I was thinking about it for a long while afterwards (not something I have time to do often!) 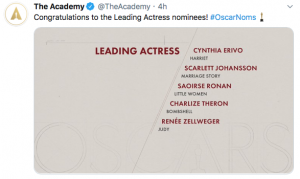 Florence Pugh, who was terrific as Amy in Little Women, turning a self-centred character into a rounded, human teenager, gets a Supporting Actress slot; and while I love Laura Dern in Marriage Story I hope that Pugh or Scarlett Johansson, who is so great in Jojo Rabbit as Jojo’s mum, wins. (I haven’t seen Bombshell or Richard Jewell yet.) 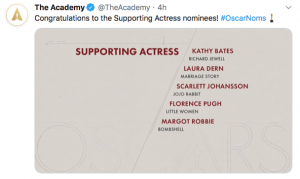 The Documentary Feature category looks strong. For Sama (also BAFTA-nominated) is in there – though I’m sad that Apollo 11 missed out. It was one of the best films of the year for me. I’ve heard great things about Honeyland and American Factory. 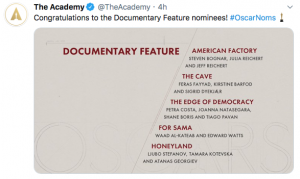 Documentary feature: American Factory / The Cave / The Edge Of Democracy / For Sama / Honeyland

The Animated Feature Film category is terrific, with Klaus, Missing Link, How to Train Your Dragon 3, Toy Story 4 and I Lost My Body. (That last one is the only one of the feature animation nominees I haven’t seen yet, though it’s meant to be excellent.) Klaus and Missing Link are real treats – don’t let Klaus being a Christmas film put you off seeing it (it’s a Father Christmas origins story, and  is funny, sweet and beautifully drawn). At time of writing, it’s still on Netflix! 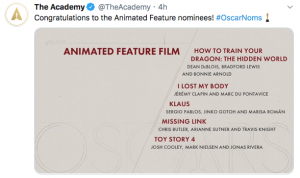 Animated feature film: How To Train Your Dragon The Hidden World / I Lost My Body / Klaus / Missing Link / Toy Story 4

The Animated Short Film noms includes Matthew A. Cherry’s Hair Love, about a Black father doing his young daughter’s hair. You can watch it on YouTube here (it’s under 7 minutes!) Hair Love was funded by a Kickstarter campaign (I contributed), the most successful for a short film on the platform – it raised $300,000. 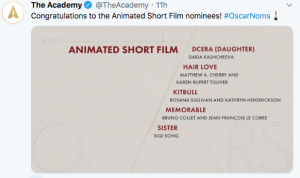 I was watching 1917 today when the nominations were announced, but as I emerged from the cinema into a grey, wet afternoon I was delighted to see Roger Deakins got a nomination in Cinematography. It’s superbly shot, the effect of it being one-take pulling the audience into its jarring, disorienting, frightening, impersonal and personal landscape. 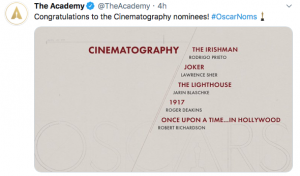 But what about the men! In the Best Actor category, I’m hoping for Antonio Banderas (Pain & Glory) or Jonathan Pryce (The Two Popes – the Other Pope is nominated for Best Supporting Actor).

Adam Driver is really impressive in Marriage Story, though something about the film itself really jarred with me. It just seemed so… smug. (Golden globe winner Taron Egerton, who played Elton John in Rocketman, is missing, as is Golden Globe nominee Eddie Murphy, for Dolemite Is My Name.) 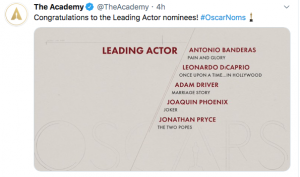 Hildur Guðnadóttir is up for Original Score for Joker – if she triumphs she’ll be the first woman winner of the Oscar category. (Guðnadóttir won the Golden Globe last week.) 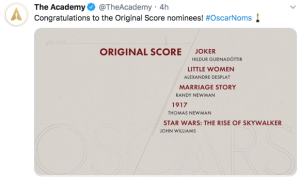 The Oscars are announced at the Dolby Theatre at the Hollywood & Highland Center on Sunday 9 February 2020. Like last year, there is no individual host. Check out the full list of nominations at Oscars.org.