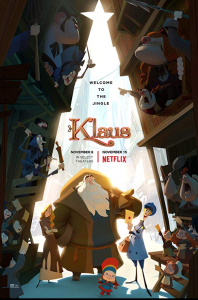 Director Sergio Pablos’s yuletide fable is surprisingly unsentimental, considering this time of year tends to brings out as much treacle in movies as in the traditional festive gingerbread.

Klaus is gorgeous to look at, clever and funny; its quirky, sometimes dark wit still suitable for all ages, a refreshing change from animated family comedies with clearly delineated kids’ and adults’ jokes.

Jesper (Jason Schwartzman), scion of a wealthy Scandinavian family and used to silk sheets and his own personal butler, has been sent by his father to his country’s postal academy to learn a real job.

He’s a lazy disaster, so his Victorian Dad then responds by sending him far, far north to the island of Smeerensburg. Here Jesper must remain, working as the town postman until he’s delivered 6,000 letters, at which point he’ll be allowed home.

The journey to Smeerensburg is long, but it’s nothing compared to the miserable, grotty, grey-hued town which is his final destination. Populated by two warring families who are only happy when they’re snarling at one another, the adult Krums and Ellingboes put the phew back into feuding (okay that joke probably only works if you say it out loud). 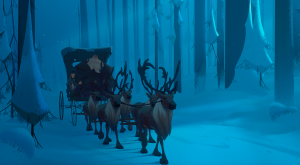 Jesper tries to encourage the local children to send letters, so he can reach his target and go home; and one envelope accidentally finds its way to the mysterious Klaus, a solitary old man living in the forest.

Klaus (JK Simmons), whose cabin is filled with his own beautiful handmade toys, forces Jesper to deliver a wind-up frog to the little boy who sent the picture, and soon all the children in the town are clamouring to write letters to Klaus and receive a toy in return.

Jesper and Klaus are accidentally kick-starting a chain of serendipitous events that brings the town back to life, and begins to bridge the gap between the two factions. Most of the children can’t write, which leads to the re-opening of the town school, run by the unfulfilled teacher-turned-fishmonger Alva (Rashida Jones). Parents find themselves gradually thawing, visiting previously-loathed neighbours with little gifts. They almost can’t believe it themselves, their facial grimaces showing their disapproval of their own feet. Even old Mr Krum, who looks like a cross between the Child Catcher and the Babadook, takes to building a slide for the little ones.

Necessity, it turns out, is the mother not just of invention but also of Christmas: reindeer are needed to deliver the toys; brightly-dressed helpers wrap presents and pack a giant sack; the Naughty List is Jesper’s on-the-spot response to a mean kid bemoaning the lump of coal Jesper left him instead of a present.

It’s not all practicality though. There’s something magical about the town as it wakes up from its miserable history, so it’s not surprising that Klaus too needs a sprinkling of magic – beyond Jesper’s quick thinking and his own talents – to become the jolly red giant.

Jesper and Klaus even manage to bring together the heads of the two fighting families, Mrs Krum (Joan Cusack) and Mr Ellingboe (Will Sasso); admittedly because they want to get rid of him and Klaus, but you can’t have everything. Life in the newly cheerful town is becoming unbearable for these senior miseryguts, with one opponent bemoaning the “bookclub that took my poor Sven!” 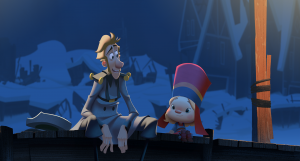 I even ended up googling after watching Klaus, not something I usually do with Christmas movies unless it’s panatone recipes, or the name of the black and white film Kevin McCallister is watching in Home Alone. Here it was thanks to the appearance of the delightfully smiley Margu (Neda Margrethe Labba), a little girl who lives with her family in their teepees nearby.

Margu is Sámi, an indigenous group of people who have lived in Scandinavia for thousands of years. Wearing her traditional blue and red outfit, chattering away in a dialect Jesper doesn’t understand, her presence allows him to get closer to Alva, who understands Margu’s language.

Klaus isn’t the only figure familiar from folklore. Mogens the boatman (Norm Macdonald) who takes Jesper from the mainland to the island, seems to be part mischievous Christmas spirit and part Shakepearean jester, slyly popping up to gleefully encourage the young postie to do whatever might make a situation worse. “Colourful local traditions, quirky folklore” is how he characterises Smeerensburg as he takes Jepser there by sea, before suggesting the new and green postman ring a giant bell in the square which summons the angry townspeople looking for a fight; “Nice fella, loves visits” he later tells Jesper about the reclusive Klaus.

Klaus is as much about the blasting of unhelpful traditions as the founding of new ones. In Smeerensburg the Krum and Ellingboe families have kept their ancient and damaging feud going since forever, for no other reason than “tradition”.

The new ways never feel forced, even though we’re working backwards to fill in the gaps of a well-known story. And among the myth-making and bridge-building, there’s still room for some pithy asides about present-giving as bribery for good behaviour. 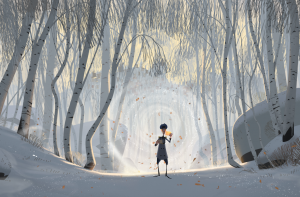 This is traditional, hand-drawn 2D animation, yet this age-old story still has a contemporary and very Scandinavian look. It’s simply stunning.

Everywhere are spikes and curls: the town is dark, sharp and angular, though the pointed rooves have a chunky covering of snow, like thick white icing on gingerbread houses. The trees in the forest are a cathedral of natural curves and colours.

Those often muted colours, pale blue, soft grey, taupe, and cream, and the use of light, are breathtaking. Scenes in the woods and the town capture that weak morning sunshine you get the further north you travel.

The orange fires in cosy hearths look enticingly warm. And Klaus, well he looks even cuddlier than the real thing (sorry, he is the real thing, right?)

Klaus is now available on Netflix.