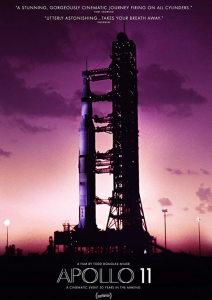 The words that sum up Apollo 11 hark back to magic – yes, this paen to science (technology, maths, physics) and humanity (bravery, a compulsion to explore, even teamwork) is spellbinding, entrancing, mesmerising.

In a modern era where there are few “elevator pitch” firsts left, let alone any that could capture the imagination of a world-wide public, director Todd Douglas Miller’s wonderful documentary about those eight days is a historical yet incredibly vibrant film that left me feeling both astonished and wistful.

Miller and his team were already working with NASA and the National Archives (NARA) on locating relevant footage when staff at NARA discovered a cache of 65mm large format film footage never previously seen by the public, covering the Saturn V launch, Mission Control, and the recovery of the command module Columbia after it splashed down in the Pacific. They also located over 11,000 hours of audio recordings. Film was rescanned at the highest possible resolution; audio was restored.

How on earth Miller decided what should and shouldn’t go in to his film to shape his narrative is probably a wonder in itself – Apollo 11 conveys the spectacle, science, audacity and sheer numbers of people required to get Neil Armstrong, Michael Collins and Buzz Aldrin to the moon and bring them back safely.

But what he delivers most spectacularly, in a film stuffed with spectacularly vibrant imagery and action, is tension.

The story of space exploration is a bumpy one, but we know this particular chapter has a happy ending. Everybody lives! They don’t get stranded on the Moon, accidentally drift off into space, or find they’ve brought back some hideous alien infection when they’re quarantined on their return. And yet the suspense, and even apprehension, is still edge-of-your-seat stuff.

The preparation builds this tension, as the astronauts suit up while outside crowds wait to watch the take off at the Kennedy Space Center in Florida. From the VIPs in their smart clothes, squinting against the sunlight, to the rows of parked cars along the river with families desperate to see the launch, this is a day out to see history in the making but with no guarantee that all will go to plan.

We move between the mission itself as Apollo 11 powers twice round the world then heads to the moon, and the relay teams supporting it below. Rows of men in white shirts and dark ties sit in banks; one woman sticks out. (I found out on Twitter a few days after seeing this film who she was – check out this article about 28 year old engineer JoAnn Morgan.)

Events of the stature of the first Moon landing will always result in the private merging with the public and the political. On 20 July 1969 Armstrong stepped onto the lunar surface: “One small step for man, one giant leap for mankind” he said, broadcasting to the world (Armstrong and Aldrin landed on the moon; Collins was orbiting above in the command module). His chat with Nixon, calling from the Oval Office, is unsurprisingly a Presidential speech rather than a conversation.

And just getting to that point was as much about political ambition disguised as an appeal to qualities we like to see in ourselves. John F Kennedy told Congress in May 1961 (a month after the USSR won the race to send a man into space) that by the end of the decade America would put a man on the moon and bring him safely home. A year later he famously declared that “We choose to go to the moon and do those other things… not because they are easy but because they are hard”. But JFK wasn’t preaching to the converted: at that stage a majority were against the idea.

We actually don’t find out that much about the astronauts. This was not an era of emoting deeply private thoughts to either the public or Mission Control back on the ground, even as they’re measuring the astronauts’ heart rates from hundreds of thousands of kilometres away on Earth. The astronauts’ awe over their views of Earth, and the jokey disappointment from Collins at another window with a less impressive vista, are real enough though: “I didn’t have much outside my window!” he says.

Along with the new-to-us footage there are plenty of images already planted in our consciousness but which still, in this film, deliver awe and wonder. “It has a stark beauty all its own” says Armstrong about the lunar landscape he’s exploring for the first time. Blasts of colour amongst the utilitarian white and grey of equipment and the dark and chilly moon stand out: vast yellow flames on take-off against a cerulean sky, the orangy-gold foil on the landing module, the blue boot soles, the American flag, brightly-dressed crowds around Cape Canaveral.

This is an eight-day mission that maintains its grip on public consciousness. Would it be now, with our gnat-like attention spans, or would only take-off, the lunar landing and their return be of interest? Miller cuts to news reports; only one other story in the US gains traction as the mission continues. It’s one still discussed today: Chappaquiddick, when on the night of 18 July Senator Ted Kennedy (one of JFK’s brothers) drove off a Massachusetts bridge. He escaped but didn’t report the accident to the authorities until the next day; his passenger Mary Jo Kopechne died in the submerged car.

Apollo 11 is a series of clips telling a huge story in linear fashion. They’re put together so well it never feels disjointed – even as we move from bright and colourful footage of smiling onlookers clad in ’60s fashions to animated diagrams of the route to the Moon, to the landing itself underneath a black sky. So well constructed is Apollo 11 that a modern voiceover isn’t needed, and isn’t missed. (Though I’m fascinated by the idea of what was left out.)

Landing back on Earth on 24 July, America’s new heroes instantly have to go into several days’ quarantine. It looks fun but must have been anticlimactic, and mundane, like being stuck in the airport when you just want to get home, regardless of the excitement of the trip you’ve just taken.

Watch the Apollo 11 trailer now and scroll down for images:

Buzz Aldrin on the moon