You are here: Home / Film Articles / 2016 – The Year We Didn’t Know If A “Best Of” Film List Was Numerical or Alphabetical 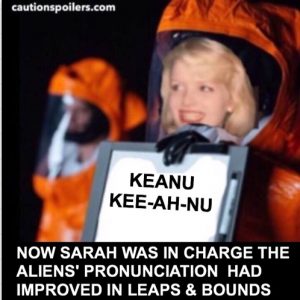 Ah yes, Arrival. Anyway I can assure you this is an in-order, 1st to 10th best, numerical list which by chance happens to be almost… ALMOST, alphabetical.

What “best of” film list this end-of-year won’t have Arrival at the top? Maybe one written by Cillian Murphy. It’s really hard to talk about Arrival without spoiler-ing – so suffice to say it’s less a narrative than an immersion. And you will weep, then you’ll weep later about the same thing. Amy Adams as a linguist charged with communicating with the aliens is amazing of course, but this time so is Jeremy Renner, who plays a mathematician whose job appears to be counting squiggles. And he’s really gorgeous with his little glasses! Even though he usually looks like a walnut. Anyway spaceships that look like giant black elongated pods with one long flat side, like a Turner Prize winner designed to annoy Daily Mail readers for not really being art, start appearing around the world. And the aliens don’t want to kill us, incubate their babies within our chests, destroy our planet for an intergalactic motorway, phone home or catch the common cold.

Mystifyingly overlooked, possibly because everyone thought an anthropoid was a giant bug and this was a 1950s-esque B movie probably starring Kevin Bacon. But actually Operation Anthropoid was a wartime plot to assassinate Reinhard Heydrich, third most senior Nazi and the man known as the Butcher of Prague. It stars Cillian Murphy and Jamie Dornan as Josef Gabcik and Jan Kubis, two Czech resistance fighters parachuted back in to their homeland with a mission from the exiled Czech government in London to carry out the killing. it’s a fantastic film, that manages to balance the first half, where the men are living in Prague, tentatively trying to find other resistance fighters to team up with, and even falling in love with two local girls, and the second half which sees a group of them holed up in a church with the Nazi machine against them, having carried out the attack successfully but messily. It is NOT an easy film to watch, particularly the end, but it really is worth it.

I LOVED this film. So many British comedies are ok, three-star movies the we all desperately want to be laugh-out-loud gag fests. Stuffed full of National Treasures, they are a Who’s Who of talented luvvies but often just aren’t tightly written enough. Then along comes Bridget Jones, years after the first sequel, and blows my socks off (not literally, though that would be a very Bridget thing to do, and the socks would probably have had fluffy sheep on them). Bridget is now a successful 40-something TV producer, and she’s THIN! She also soon has two eligible men after her: Hugh Jackman, I mean Patrick Dempsey, and Colin Firth. Obviously if you are British you have to root for Colin Firth (sorry Hugh. I mean Patrick). And – spoiler ahead – she has a BABY. I won’t tell you who the Daddy is but suffice to say she calls it Colrick.

4. Hunt for the Wilderpeople

A road movie in a place (the New Zealand bush) without any roads, it’s about Ricky (Julian Dennison), a troubled teenage boy from the care system. He is finally deposited on a farm with I’m-Not-Your-Bloody-Uncle Hec (Sam Neill) and Aunt Bella (Rima Te Wiata), a warm and loving woman also who has no off-switch when it comes to saying things as she sees them (for example when it’s his birthday she makes him a cake and then sings a birthday song about Ricky which manages to rhyme Rejected with Accepted). Sadly Bella dies and Ricky, terrified of being sent back to a care home, runs away into the bush, with Hec in pursuit. There follows several months of them living rough or in hikers’ huts, trying to avoid the authorities who are now after them. Charming, very funny, and resolutely unsentimental, it really is a must-watch. I just wish we’d got to see more of Bella who is just brilliant.

A hospital vending machine won’t give Jake Gyllenhaal his M&Ms so he demolishes his lovely home. (I should probably add at this point – lest you think he is the worst kind of overindulged grown-up baby – that his wife had just died in the hospital). This could only be made in America – house prices are so high here in the UK if you tried to bulldoze one for your art you’d probably be arrested. Anyway he contacts the customer service department of the vending company and starts a phone relationship with one of their operatives, played by Naomi Watts. At the same time he delves into his wife’s life and realises that the more he discovers the less he knows about her.

6. Girl With All The Gifts

Yes, another British zombie movie! I’ve worked out that the reason we are so good at making zombie movies here is that most filming takes place in the south east which means a film unit is never far from a shopping centre somewhere near Reading or Slough, perfect for that ubiquitous “zombies and commercialism ” allegory. That said this is a terrific film set in a post-zombie apocalypse world. As usual only a few military outposts are holding out, though what’s different this time is the children – a group of whom are not just zombies, but intelligent, second-generation zombies. Cute and hard working, they nevertheless have to be kept in secure wheelchairs to protect everyone from their unnervingly real natures.

A beautifully shot tale about two bankrobbing brothers (Chris Pine and Ben Foster) trying to lift their family out of grinding poverty. Their mother is dead and oil has been found on her tiny ranch, but the bank are foreclosing on a debt that’s got bigger and bigger, thanks to their lending practices that are keeping poor people poor. What better way to save the children’s future and say a big “fuck you” to Texas Midland Banks than to pay off the mortgage with money stolen from that very same bank? The towns around them are dying in the shimmering Texan heat, as the brothers hold up branch after branch, pursued by about-to-retire Marcus Hamilton (Jeff Bridges), and his partner Alberto Parker (Gil Birmingham).

What a bargain – two films for the price of one! This is a film within a film, as art gallery owner Susan Morrow (Amy Adams) receives a proof copy of a book written by her former husband Edward Sheffield. The book is about a shocking and brutal double rape and murder of a woman, Laura, and her daughter India by a gang of thugs who run the family off the road in Texas late one night. Tony, Laura’s husband and India’s father, is completely out of his depth and unable to protect them. And after the murders, it takes a chain smoking lawman, Detective Andes (a brilliant Michael Shannon) to almost force Tony into getting revenge and a form of closure. Edward the author though doesn’t offer Susan any form of closure, and clearly still blames her for their unravelling marriage twenty years ago. Edward and Tony are both played by Jake Gyllenhaal, with Laura played by Isla Fisher – a nice conceit. Scenes from the Texan novel are almost replicated within Susan’s glamorous and minimalist LA life. Adams, Gyllenhaal, and Fisher are all brilliant in this, though Edward is a horrible character. The worst kind of failed writer, he is weak, brittle, jealous and unable to take criticism (so basically me, then). 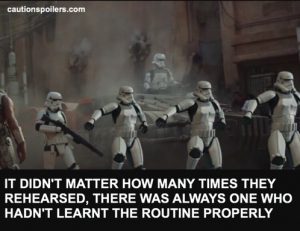 9. Rogue One: A Star Wars Story

I’m the first to admit I’m not a Star Wars fangirl. I didn’t see the first three films until their re-release almost 20 years ago and then I completely shocked my friend by saying, literally as the cinema lights dimmed at the start of The Empire Strikes Back, “I’ve never seen Star Wars, what happens?” And since then I’ve pretty much forgotten the plots. I saw The Force Awakens last year too and I’ve forgotten what happens in that as well. I know quite a lot about Star Wars simply because of that weird cultural epigenetics where we all somehow know about stuff without ever seeing it or reading it, so I know who calls Darth Vader daddy, but I have no clue what an Ewok is. Still, I went along at 12.01am on the first day of release to see what all the fuss was about, and guess what, Rogue One is a cracking film. Exciting, with amazing effects, it also boasts the world’s funniest android (K-2SO, who is basically your mum if she was ever downloaded into a computer, giving you percentage-accurate likelihoods of disaster striking if you continue with your current course of action). There are excellent performances from the leads and even a back-from-the-dead cameo. An yes I am AMAZED I HAVE REMEMBERED ANY OF THIS.

I had read the Arthur Ransome book when I was a child, but yes, you’ve guessed it, I can’t remember what happens in it. Which meant that I could take my children to see this without steam coming out of my ears at any liberties taken with the plot. It’s a lovely film though, set in 1935 when children were considered free-range rather than feral and they could go off CAMPING on an ISLAND and ROW there in a tiny boat when the littlest is only about 6, because ““Better drowned than duffers, if not duffers won’t drown”. They of course lose most of their food over the side of the boat en route to the island, but it’s okay as their landlady has baked them the world’s most enormous fruitcake, so large it is – like the Great Wall of China and Piers Morgan’s ego – visible from space. There are also run-ins with the Amazons, two hard-as-nails local girls, and their Uncle Jim, a spy, who is being tracked by two Russians. It’s a slightly uneven romp, but great fun.

There are lots of films I really wanted to see this year but didn’t manage to (Love & Friendship, American Honey, Train to Busan and, er, don’t tell anyone but London Has Fallen). I am also currently HALF-WAY through Deadpool and it’s hilarious but it’s NYE tomorrow so the chances of me watching the rest AND writing a coherent review of it are, frankly, slimmer than an “I eat pizza and burgers, honestly!” Victoria’s Secret model. So this is my list. Feel free to comment, and as usual suggestions for films I’ve missed will be gratefully received. Or you can email me on [email protected]