You are here: Home / Film Reviews / Hunt For The Wilderpeople 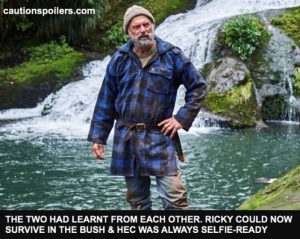 It’s fair to say that films about lost boys looking for a father figure and settling on the least likely candidate aren’t exactly rare. But you’ll be hard pressed to find a more satisfying example of the genre than Hunt for the Wilderpeople. Charming, funny, and moving, it still manages to avoid the cloying sentimentality of many typical films.

, or buy Hunt For The Wilderpeople [DVD]

Or Amazon.com Video, Blu-Ray or DVD Hunt for the Wilderpeople

Ricky Baker is a chunky, pretend-gansgter teenage boy who has been right through the foster care system in the city. He is finally deposited – by hard-as-nails welfare officer Paula –  on an isolated farm, with foster parents “Call-Me-Aunt” Bella and “I’m-Not-Your-Uncle” Hector, or Hec.

Bella is warm and maternal but one of those women who tells it like it is. “You hungry?” she says to the rotund Ricky – followed by “…that’s a silly question isn’t it, look at you!” and accuses him of eating all the pies. When it’s his birthday she makes him a cake and then sings a birthday song about Ricky which manages to rhyme Rejected with Accepted.

Underneath all this, she is, though, very understanding of Ricky’s feelings and needs, especially when he runs away the first night (Ricky is hardly equipped for life in the bush and really doesn’t get very far before falling asleep in a field and being found by Bella). She also gives him a puppy which he calls Tupac.

Hector, or Uncle Hec as he really doesn’t like being called, is Bella’s husband, a man for whom the word taciturn could have been – very quietly so as not to make a fuss – invented.

Which makes it all the more shocking when he is found by Ricky loudly weeping over Bella’s lifeless body after she has collapsed and died hanging out the washing. It marks an end to his and her own idyll, and an end to Ricky’s recent stability  – Hec tells him that he’ll have to go back into the care system as the authorities won’t let him stay without Bella.

Ricky is determined not to go back and proceeds to fake his own death. He leaves a handwritten note saying he’s going to burn himself to death in the barn, places a homemade body on the floor, then sets fire to the rickety building before hiking off into the bush. Unsurprisingly he gets lost and has to be rescued by Hec, who then injures himself resulting in the two of them having to camp. They then set off deeper into the bush, pursued by the authorities who have found the burnt out barn and empty house.

Hec is a man for whom the word curmudgeon could – rather stroppily and in a not suffering fools gladly kind of way – have been invented. In the bush he calls Ricky a bastard then finishes with “I don’t really think you’re a bastard” to which Ricky pipes up “yes you do!”

And as the two travel around they really do develop a deep if rather curt bond, helping each other out. In hindsight it’s clear that Bella’s warmth had saved Hec just as much as Ricky – Hec is illiterate and as much of an outsider as Ricky is.

It’s autumn and winter time (they are outdoors for a few months) and they steal food and loo rolls, then stay in hikers’ huts along the way. In one they meet three hunters who are both unpleasant and dim, and completely misconstrue Ricky’s words assuming Hec is a child abuser. With the police even more desperate to catch the two, it takes their saving of a sick Ranger to turn the tables among the public who then start to root for the pair.

Although Ricky is not prepared for the great outdoors, luckily the authorities are equally inept and their constantly unsuccessful pursuit of the two renegades seems to be more lukewarm than hot. At one point Ricky evades capture by hiding behind a tree.

Hec – a man for whom the word… okay I think I’ve run out of words to describe Hec.

The chase at the end is great fun -a rather slow race as police cars, motorbikes, a helicopter and even a tank pursue Ricky and Hec across uneven ground, with Ricky driving a red truck that he’s hot-wired. But despite Ricky’s urban skillz, he still isn’t much use in the great outdoors and he even manages to shoot Hec in the buttock before their eventual and wholly expected capture.

The film is a complete delight and also ends in the only realistic way it could really. Sam Neill and Julian Dennison are wonderful throughout and their relationship seems very true. Even at the end of their car chase, with Hec hiding behind their beaten up vehicle, and Ricky being dragged off, the teenager is still shouting for Uncle and Hec is still shouting back “I’m not your bloody uncle!”.

It’s an easy film to follow, and I liked the chapter headings on screen (and how much better value than John Wick where you have to wait TWO YEARS for a new chapter and for all we know it might never get more than Chapter 2).

I did find Psycho Sam, an off-grid bearded man who makes them wear saucepans on their heads to avoid having their minds read by the government, over the top – he starts to grate quite quickly. Paula the care worker is determined and unsentimental, so she fits right in. Aunt Bella is simply brilliant and though you know her story has to end when it does, I could have listened to her one liners all day – any chance of a Bella and Hec prequel?

, or buy Hunt For The Wilderpeople [DVD]

Or Amazon.com Video, Blu-Ray or DVD Hunt for the Wilderpeople