You are here: Home / Film Reviews / Hell or High Water 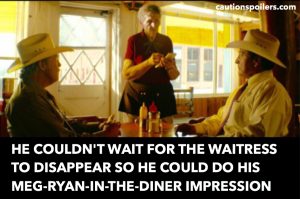 Hell or High Water is a film about a criminal (Ben Foster) who commits the ultimate offence of putting his gorgeous and much nicer brother (Chris Pine – we know he’s nice as he’s so handsome) in a ski mask for several minutes of this film.

Okay actually it’s about a career criminal brother and his he-wasn’t-but-he-is-now criminal brother who team up to commit a series of small-scale bank robberies across Texas, with the aim, finally – after several generations – of lifting the family out of seemingly inescapable grinding poverty. The part of Texas they live in is dying on its feet so career criminal is pretty much the only career left open that doesn’t involve serving in a diner or herding the few remaining cattle.

It would’ve been easy for Hell or High Water to to turn out a cliche-ridden double bromance as there are quite a few movie tropes in this love story / revenge thriller, so it’s a tribute to director David Mackenzie that it’s actually a very touching, at times funny, at times quite brutal story. With a bit of grudge-bearing thrown in at the end to stop it being too redemptive.

Tick-box wise, Hell or High Water has got a retiring cop who’s married to his job; brothers you’re rooting for on the wrong side of the law; a backwater county where the children leave as soon as they can and don’t look back; buddy-buddy cops who bicker like a married couple; and a black gold windfall. Oh and porches. Lots of porches with chairs for sitting out on while chewing something. It’s a really, really great film though, which just shows you can take the same basic themes, add some impressive moustaches, excellent performances and a poignant and sardonically amusing script, and breathe new life into a few old, old stories.

David Mackenzie’s Hell or High Water is set in Texas, across a string of identikit dying towns, where two brothers are robbing branches of the Texas Midland Bank – easier than it sounds to carry out, as the lack of jobs and money means that banks are almost always empty. The brothers, Toby and Tanner Howard, would be funny if the story wasn’t so sad. Jailbird Tanner is in and out of prison and it’s a miracle he’s currently not inside (when Toby asks him how he’s stayed out of prison for one whole year, Tanner admits has no idea).

At first it seems as if Tanner is in charge as he’s got form for bank robberies, and he certainly looks after Toby after each crime when they head to a casino to launder their money. But it becomes clear that actually he is is dim and unpredictable, with lucky Toby the recipient of both the looks and the brains in their family (I say lucky, as lucky as you can be when you live in a town that’s on its knees, you owe thousands in child support, you’ve just robbed a bank and Jeff Bridges is after you). He’s also bright and personable (in case you want to pretend you don’t love him just because he’s gorgeous Chris Pine).

The brothers certainly love each other. They even tell each other they love each other, which seems excruciating for them, like watching two Brits who spent 50 years together via public school, Oxbridge and The City together trying to avoid giving each other more than a stiff handshake on their deathbeds.

The other half of the love story is between Marcus Hamilton, Jeff Bridges’ thoughtful but jokingly-racist-so-that’s-ok-then Texas Ranger, and his partner Alberto Parker. Hamilton is about to retire (yes guys this is a “one last case to see through before I’m sitting in a rocking chair on my porch” movie). This means Parker only has a few days left putting up with Hamilton’s endlessly dodgy comments about Parker’s Indian heritage (and Hamilton readily agrees that once he’s got through the Indian “jokes” he’ll start on the Mexican ones as Parker is also part Mexican).

Parker has a family but Hamilton’s wife is dead and he only has his dog for company (look I’m going to tell you RIGHT NOW that the dog survives, okay? What with John Wick and Zombeavers I’m not sure any of us could cope with any more canine calamities).

Both sides are also hellbent on revenge too. The Howard brothers have watched as their mother (who neither liked much, but, well, family) was sold a dud reverse mortgage that left her massively in debt. (You know in The Big Short where you come out of the cinema pleased that the little guys won, then it gradually dawns on you that the little guys are actually little money-making guys and just not quite as bad as the big money-making guys who we all hate? Well this film is basically the opposite side of The Big Short – it’s all those poor families in the half-finished housing estate with the alligator in the swimming pool).

Now their mother is dead and oil has been found on her tiny ranch, but the bank are foreclosing on a debt that’s got bigger and bigger, thanks to their lending practices that are keeping poor people poor. What better way to save his kids’ future and say a big “fuck you” to Texas Midland Banks than to pay off the mortgage with money stolen from that very same bank? Hamilton’s revenge comes later as we realise that his and Parker’s relationship – snide comments from Marcus, silence interspersed with the odd frustrated reply or funny comeback from Alberto – is like a marriage. (Parker’s best line – when Hamilton has yet again been blowing his own trumpet regarding his skills at bringing in the crims – is to say sardonically “sometimes the blind pig finds a truffle”.)

So how does Hell or High Water pan out? Toby’s ex wife needs his unforthcoming child support to pay for their two boys. Toby and Tanner’s mom has left everything to Toby – in turn he’s putting it into trust for his sons now that oil has been found on her property. But first there’s the small matter of paying off the mortgage and other debts the bank has piled on by Thursday when they’ll foreclose. During their initial bank robberies in the nears-empty banks, the boys come across as slightly inept and therefore slightly more dangerous. The bank clerks and managers they hold hostage seem almost parental in their encouragement to the brothers to stop now before things get worse. They don’t stop of course, there’s always one more bank to rob before they finish and things do get worse, though it’s never so simple as that. Tanner even seems to revel in the chaos when people start dying and the chain of events they’ve started runs out of control.

Hamilton is tracking the brothers, working out where they’ll strike next as the robbers hit town after town, burying their cars along the way. (Hamilton does seem to turn up slightly late for all these robberies. All film cops and rangers over 40 seem to walk r-e-a-l-l-y slowly everywhere, I’m sure if they just sped up a little they would catch a lot more people). The brothers’ last, badly off course robbery turns into disaster when they foolishly hit the last town on payday. Those people still in jobs are all queueing in the bank.

As their plans collapse epically, the brothers are pursued by locals and rangers. Tanner gets his decidedly unheroic last stand out on the plain, but in so doing he does finally become an ever so slightly sympathetic character – it’s as if he knows his trajectory and is powerless to stop it, so he might as well help his brother while he’s following his disastrous path to it’s logical conclusion.

And what can I tell you about the ending to Hell or High Water that doesn’t completely give away what happens. Well there’s a porch involved, and grudge bearing, and moustache wearing (one old timer moustache, and one Village People-esque moustache) and the world’s smallest oil wells (compared to the ones I used to see in “Dallas” anyway). And almost, almost, a happy ending.