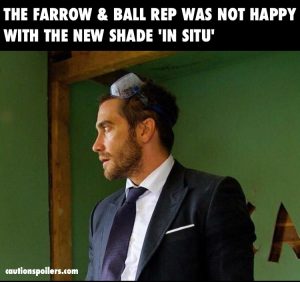 If the title of this film wasn’t already so perfect it could be renamed “Two Stalkers and a Bulldozer”.

Jake Gyllenhaal is Davis, a finance guy whose wife Julia constantly tells him he never pays attention (that he knows this indicates that he must, at least once, have paid attention). He doesn’t really love her, and doesn’t really know her, so his reactions when she dies in a car accident (caused – kaboom! – by her not really paying attention) are not as expected.

A few minutes after she dies in hospital he tries and fails to buy peanut M&Ms from a vending machine. And this tiny annoyance, one replicated a million times a day by corporations who don’t really care about their customers, whether they’re selling sweets or kitchens, becomes the catalyst for change in Davis’s life that shatters everything he possesses.

Most people would forget about the M&Ms but Davis needs distractions from his wife’s death and spends the funeral wake composing a very, very long letter – in longhand – to the vending machine company. About the missing M&Ms, and his wife’s death, his life, and god knows what else, when he could have been eating vol-au-vonts and cheese balls and thinking that the afterlife must be better than this.

But as anyone who has tried to complain to officialdom knows, one letter is rarely enough, and in the days that follows her composes more and more. He also starts taking things apart to see how they are put together (could that be a metaphor, for his life and marriage? Hmmm) – and it’s at 2am one morning when he’s just deconstructed the fridge that he receives a call from Karen (Naomi Watts), the vending machine customer services person.

They then stalk each other in diners, on trains and round the streets, but refuse to meet. He continues to write long letters to her at work about his life, and the still-unrefunded M&Ms, and even visits her workplace.

At his office he takes apart his computer, and a particularly squeaky stall door in the loos. At his in-laws’ house he takes apart the bathroom lighting. He even approaches a house demolition team that he sees on the street and pays them to let him join in. (Which all sounds very admirable but I give no praise to anyone taking things apart and putting them back together unless they are (a) 5 years old or (b) have taken a tent out of its bag and then fitted it back in again, with the poles, and zipped it up. I know, I’m a hard taskmaster.)

Davis and Karen become so close he even meets her 15 year old son, Chris, who is dealing with his sexuality and has been suspended from school. In Davis’s first conversation with the boy he has the fucking nerve to instruct Chris in the correct use of fuck, which he feels Chris overuses to the point that it loses its power (something I worry I may be guilty of myself. Oh fuck).

Davis and Chris then start the process of demolishing Davis’s perfect house, with an eBay-bought bulldozer. (Anyone longing for a new shiny kitchen will mutter “fuck”, oops sorry there I go again,  I mean weep tears of filtered iced water straight from the stainless steel refrigerator, as they smash the perfect marble island).

Despite the initial sadness and weird premise – hanging a revenge flick on M&Ms is even sillier than John Wick killing 80 people because of his dog – it really works. Like John Wick it is actually about loss, and whether a life constructed can be escaped.

Demolition is dark and funny and not too long thank fuck. (You all know my frustration at overlong films, though of course this film would’ve been a whole lot shorter if Karen had just done her job at the start and refunded his fucking money or sent him some FUCKING M&Ms. Can you tell I used to work in customer service. Well, until I was sacked for swearing.)

Jake Gyllenhaal is terrific and wholly believable. And while Naomi Watts (also excellent) continues to look old and careworn throughout (to the extent that I was constantly thinking “where is Naomi Watts?”), Gyllenhaal’s character looks sparkily gorgeous, even after his wife’s death and his transformation from executive office man to demolition guy. Presumably because she is the solid core around which all the drama, some of it self-made, unfolds; and the shiny, sexy things that people typically covet, whether state of the art kitchens or the image of a supposedly perfect marriage, are destroyed.

The only weird thing is that Davis and Karen never actually, what’s that word again? Oh yes, sex.