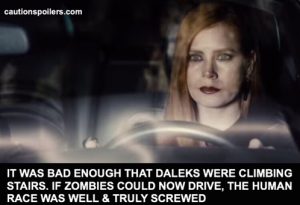 Nocturnal Animals starts with several overweight, middle aged women dancing naked, and clearly enjoying themselves – soon the camera moves back and it becomes apparent that they are part of a gallery exhibition. It’s opening night and skinny young people dressed in black with champagne glasses are ignoring the exhibits as they chat, thereby demonstrating that middle-aged women are so invisible they can dance naked for a room full of people and will still go unnoticed.

Susan Morrow, the owner of Morrow Gallery is – on the surface – so wealthy she has people to open her post for her when she paper-cuts her elegant finger. Actually her and her husband’s finances are collapsing along with their marriage.

She lives in a large LA house with good-looking, unfaithful husband Hutton Morrow (Armie Hammer), for whom she left her first husband Edward Sheffield.

20 years on, Edward – a previously struggling author – has finally completed a full manuscript called Nocturnal Animals, and he’s sent a proof copy to Susan to read. The book is also dedicated to her (Edward had called Susan a nocturnal animal as she rarely sleeps).

Growing up together in Texas, Susan and Edward had lost touch before bumping into each other again in New York in their twenties and marrying. Susan’s rich, snobbish mother had never thought he was good enough and within a couple of years Susan had left him for Hutton, after aborting Edward’s baby.

Edward’s novel is a harrowing read for Susan. A family – Tony, also played by Gyllenhaal, Laura (Isla Fisher, a brilliant conceit as she and Amy Adams look so alike), and teenage daughter India – are en route to Marfa in Texas. Driving through the night, they’re run off the road in the Texan desert by a gang of thugs who veer between menacing taunts, and fake helpfulness.

Tony is completely out of his depth about how to react, and cannot protect his wife and daughter (he can’t even change his car tyre, the thugs do it for him).

Eventually he has to watch, helpless, as the gang, led by Ray Marcus (Taylor-Johnson), drive off with Laura and India.

Finding help the next day, he is paired up with Detective Andes (a brilliant Michael Shannon), a clearly ill, chain-smoking lawman, and they discover his wife and daughter’s bodies. Andes, while he comes across as laid-back and sardonic, is actually desperate for the gang to face justice.

Soon Susan’s life and the scenes within the novel are mimicking each other – Tony takes a bath in a cheap motel the day after the attack, Susan takes a bath in her lovely, spacious, neutral LA home. And when Tony and Detective Andes discover the raped and murdered bodies of Laura and India, naked and holding each other, the scene cuts to Susan’s daughter Samantha in exactly the same position, lying naked with her boyfriend.

Eventually the book seems to be leeching into her world even when she’s not reading it – there’s a short but shocking scene where art gallery colleague Sage (Jena Malone) shows Susan an app on her phone of her baby daughter Willow in her cot, so Sage can check up on her and the nanny during her working day. Suddenly Susan imagines she’s seen Ray from the novel in Willow’s room. (Malone is great, she’s not in the film much but she sports the kind of designer outfits only ever worn by fashion and art people. She’s basically Bubble from Absolutely Fabulous updated for 21st century LA.)

The cinematography is fabulous. The LA scenes have a slightly washed-out lushness while the Texan vistas are dry and hot and seething with an inescapable sun. (It really reminded me of the Neon Demon both in terms of the look and the way such obvious allegories are positioned, though ultimately Nocturnal Animals offers a more sophisticated take.)

The ending made me dislike Edward even more. He comes across as the worst kind of failed writer – weak, brittle, jealous and unable to take criticism (so basically me, then). He clearly hasn’t forgiven Susan and he seems so self-absorbed I wouldn’t like to guess what he still hasn’t forgiven her for –  leaving him, having the abortion, or possibly even for not appreciating his earlier writings as uncritically as he feels she should? Even two decades on he is punishing her by dedicating a novel to her where a character clearly based on her is raped and murdered (at least he has the foresight to paint Tony as flawed and weak though you get the feeling that is an accidental reflection on Edward’s part).

Amy Adams is brilliant as Susan Morrow, a woman who doesn’t seem to feel she deserves to be happy because of what she’s done, when she doesn’t seem to have done anything worse than anyone else. She’s a victim three times over – of Edward’s lack of forgiveness, as the character in his book, and of his final humiliations at the end of the film.

Gyllenhaal is on screen as Tony much more than as Edward and is very believable in his portrayal of a man devastated by guilt and cowardice. Shannon as Andes is superb – he’s the driving force behind getting justice, any kind of justice, for Tony. You rather feel without him, Tony would have just gone home and been ineffectually sad about his destroyed family without actually doing anything.

Nocturnal Animals is not an easy watch. Stories of rape and murder – even if they are set at one remove like this one – are always hard to get right, as it is so easy to be exploitative, and there are a few moments where this part of the film seems unnecessarily lingering. I had to keep reminding myself that these were from the book within the film, as a way to create more distance between the Texan horrors and me.