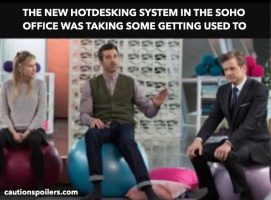 Wow what a great film. From the opening credits where Bridge finally mentally sticks up a finger to “All By Myself” and instead leaps around her tiny Borough flat to “Jump Around” by House of Pain, this comedy keeps up a great pace, driven by two engaging leads and Dr Ross from ER, sorry I mean Patrick Dempsey.

Admittedly I didn’t have high hopes of yet another Brit Flick full of National Treasures who all know each other and will have had a rollicking good time making it, as often this means it’s not tightly plotted OR written OR edited (but hey National Treasures tho! And they all had a BLAST on set) – but “Bridget Jones’s Baby” was much, much better than expected. It is a bit flabby in the middle (aren’t we all) and they could have cut a few minutes but it’s definitely a four star British comedy, for once. Bring out the bunting / light those fireworks/ etc etc.

Bridget is her usual clumsy self, but – thank god – she’s now slim (the reason I say this is because in the book Bridget is NOT fat – she just thinks she is – so to me the earlier films where Renee Zellweger bulked up for the role are really patronising and inaccurate). What is interesting in “Baby” is that she and Mr Darcy and Charlie Fairhead from “Casualty” (sorry, I mean McDreamy from St Elsewhere) all look their age – she is 40s and pregnant, and looked 40s and pregnant (knackered with a few wrinkles and roots showing – though of course this was filmed before Renee didn’t have her work done). Anyway it was quite refreshing to see a movie about three over 40s who didn’t look 20 even if they are all still more goodlooking than the rest of us.

Sadly poor old Daniel Cleaver is dead, crashing rather appropriately “in the bush” and it’s at his memorial service – friends and family on one side of the church, several pews of 20-something Eastern European models on the other  – that Bridget sees Mark Darcy once more, attending with his wife.

Bridget is now 43 and a hotshot TV producer. Her younger news presenter colleague Miranda resolves to take Bridget away for the weekend to a festival because what she needs is some hot sex. Sadly poor Bridge is dressed all in elegant white for a spa trip and within minutes of arriving is face down in the mud, her outfit ruined. Her gallant rescuer Jack Qwant (Dempsey) is sent on his way so she can get pissed with Miranda all afternoon, though after an evening spent crowd-surfing Bridget stumbles into his yurt and they enjoy a passionate night together (she leaves in the morning before he brings BREAKFAST! Craziness).

Of course in order to have the ‘who’s the daddy?’ plot we’re all waiting for, Bridge has to get together with Mark Darcy once more, and this is achieved at a friend’s baby’s christening where he and Bridget are godparents to the little girl. Darcy is so deliciously uptight, I’m surprised he’s ever actually had sex unless it was in the dark with someone who reminded him of Matron from his boarding school days, and he’s already a film foil to Jack’s American openness. In his way he is of course as socially awkward as Bridget though he clearly has always admired her ability to keep going through all embarrassments, propelled forward on a surge of goodwill and her own inability to stop lest she start crying again at the horrificness of everything. There’s a great scene at the christening where the photographer ask him to “kiss her on the forehead” so he leans in and kisses Bridget, only for the photographer to shout “I meant the baby!” After the ceremony there’s an amazing party and she and Mark end up in bed together (but it’s ok as he’s getting divorced so Bridget is still Nice Bridget not Homewrecker Bridget).

Once she’s aware she’s pregnant there’s THAT scene with her Obstetrician (played by Emma Thompson) where each would-be father in turn comes in for that “unique moment”, the first scan. Luckily soon after she does admit to each man that they could be the father but not before an elaborate attempt to get DNA from Jack – who it turns out is a very rich online dating expert who is obsessed with algorithms – by having him invited on to her news show to be interviewed then getting the make-up lady to cut his nails and pull out his hair.

As fathers-to-be, both men are super annoying, forcing her to be healthy and competing with each other to help her the most. (I imagine that Bridget has her due date circled on her calendar purely so she can count the days till she can have a fag and a big glass of chardonnay).

There’s a fun but not-that-necessary subplot involving a new, very young and very scary female boss at Bridget’s work who brings in a whole team of bearded hipsters to bring the TV channel into the social media age, where interviews with ageing despots (or their drivers) are replaced with features on cats who look like Hitler – Bridget has to do a presentation about these changes but of course it all goes horribly wrong and results in user-generated content comprising of a team of old men mooning on screen in front of assorted TV bigwigs. It’s funny but let’s face it, all we’re really interested in is WHO’S THE DADDY!

We do find out – AND I’M GOING TO TELL YOU NOW SO PLEASE REMEMBER THE TITLE OF THIS WEBSITE – at the wedding of the year when Bridget finally marries Mr Darcy, the father of her sadly-not-very-cute baby (I know, I’ll go to hell for that. I was always the only mum willing to admit when my babies went through a hideous stage. My eldest lost all his hair apart from one super-long ginger tuft at the front when he was about eight months old and looked like a reject from a 1980s tech synth band).

Anyway she walks down the isle. In the world’s FRUMPIEST wedding dress. Honestly Bridget, you may be 43 but it’s possible to buy an elegant, beautiful white dress for your Big Day that doesn’t make you look like either the ghost of a Victorian governess, or a red carpet soap opera starlet who’s left her knickers at home. Jack is waiting for her holding the baby, but in true movie style he moves away and there’s Mark Darcy waiting to say “I finally really actually um yes I do”.  (I know it’s totally cheesy but I really wanted an ending where one off the men is the father but she marries the other one, then they could all live together in a big house and bring up baby William. And to be honest with London house prices that’s really not such as bad idea).

It really is a cracking film. Naturally we have to suspend disbelief (no I don’t mean having a baby with no problems at 43, though that too – having been pregnant in my 40s, thanks to all the warnings you get about the perils of being ancient, it was all I could do not to shout at the screen “don’t tell ANYONE you’re up the duff until the minute you go into labour, Bridget!”  – I mean stumbling into Jack’s luxury yurt at a huge festival a few hours after he retrieved her from the mud).

And as with all Brit Flicks there are cameos, this time with the singer Ed Sheeran being rebuffed when Miranda and Bridget ask him to take a selfie of them but don’t want him in the picture – later he zorbs round the festival site with Miranda. I thought there was a cameo from Kate Moss too but it turns out that was just an ad before the film (I’m just so used to her popping up in EVERY British film I actually assumed she was there).

Bridget’s usual group of friends are still around – her squad I guess we’d call them now, and the acting from the supporting cast is first rate, particularly Miranda the newsreader who I’d love to see more of. Neil Pearson is also back and was a welcome face, both with and without his attempt at a hipster beard which looked more real-ale aficionado than Shoreditch man-bag wearer. Renee Zellweger is brilliant of course, she does an English upper middle class accent so well that she doesn’t even have that slightly mannered delivery that actors attempting accents often have. She IS Bridget and it seems extraordinary that when she was first suggested for the role there was such an outcry. Colin Firth is also first rate.  (I hate it when very successful actors come back for sequels to films made before they were mega-famous and you know they’re a bit embarrassed by it. Firth clearly loves playing Mr D despite his many other successes.) Patrick Dempsey is actually fine, I just don’t really see him as a first choice in any big film (you can imagine the producers – “we want Hugh Jackman but we can’t afford him, I know we’ll get Dr Kildare! Sorry we mean Patrick Dempsey”).

Obviously as in any film you go to see where the protagonist is designed to be like you (let’s face it ladies we may think we’re all the best bits of Carrie, Charlotte, Miranda, Samantha and from “Sex & The City” but we’re all actually the worst bits of poor Bridget only without Colin Firth / Hugh Grant / Hugh Jackman, sorry I mean Patrick Dempsey) you can get a bit too emotionally involved, and and I’m now desperate for another sequel (“Bridget Jones’s Baby Weight”? Oh no there wasn’t any was there).