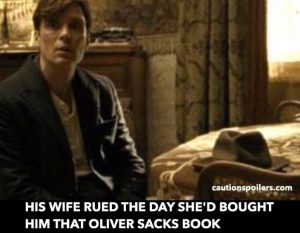 As Czech resistance fighters Josef and Jan try to locate their contact from the raggle-taggle remnants of the Czech Resistance, the  constant low level terror at being found out or betrayed to the Gestapo is palpable. Nervousness skitters through every meeting as they all try to work out who can or cannot be trusted. Everyone is a potential informer and if they aren’t now, they may be soon, when family and friends can be summarily executed as leverage or punishment.

The two men have been parachuted back in to their homeland with a mission from the exiled Czech government in London to assassinate Reinhard Heydrich, the man known as the Butcher of Prague.

I got an almighty shock when I went to see this. I managed to mix up Anthropoid (a primate) with Arthropod (a crustacean or spider), so I was convinced I was off to see a 1950s-style B movie about hazardous waste turning tiny insects into rampaging beasts while the local mayor tries to convince everyone there’s nothing to see here.

But I’m glad I made that error as Anthropoid is a brilliant if heartbreakingly bleak second world war thriller based on the true story of Operation Anthropoid, the plot to assassinate Heydrich, third most senior Nazi and a man responsible for the deaths of thousands of Czechs.

And bleak it most certainly is. There’s a warning on the BBFC film classification screen at the start of violence and torture, a reminder to me that usually I don’t go higher than “mild peril”.

It’s filmed in a sort of sepia tint (apart from the chillingly contrasting bright red and black of the Nazi flags) and to be honest I’d have preferred a more modern and brighter hue. I don’t think it helps watching something so easily put back in the box marked “history” and forgotten. It’s much easier it is to identify with people when they and their environment look more us, not grainy black and white or time-browned images of the past.

And let’s face it, the more people see the similarities between us today and those who lived through major historical events, the more we can understand what happened. But for an accident of time it could have been us, and how would we have acquitted ourselves is always an uncomfortable question worth asking. (I suspect I’d have spent six years hiding under my bed, sadly demonstrating the truth of one character’s quote from Shakespeare’s Julius Caesar: “cowards die many times before their deaths”).

The film stars Cillian Murphy as Josef Gabcik and Jamie Dornan as Jan Kubis, the two Czech resistance fighters.  I loved Murphy in “28 Days Later” and “Sunshine”, and in this he is superb and utterly convincing. He is also extraordinarily good looking – possibly the only man in the world able to make Dornan look a little bit ugly. Murphy has the most amazing unlined skin and cheekbones and in this his face almost looks waxy, appropriately like a dead man walking. His character Josef is a human juggernaut who believes any patriot should be prepared to die for their country – and despite knowing the likely retribution whether they are successful or not, he is still absolutely determined to carry out his mission.

Dornan, an actor I’ve been slightly suspicious of as he came up via the model>actor route (and he does look slightly Man-at-M&S once he gets his knitwear out in this), is also excellent as the equally brave fighter who nonetheless finds the thought of killing someone up close almost impossible in reality, and who really just wants to go back to a normal life and get married.

Eventually they are housed in the home of the Moravecs (known as Auntie and Uncle) along with their teenage violinist son and Maria, who helps in the house. Maria, in a warm and moving performance by Charlotte le Bon, is prepared to help the two men and ropes in her red-headed friend Lenka so the four of them can go out in couples and blend in more easily. (There’s a terrific scene at a dance where the four of them meet up, surrounded by off-duty Nazi officers – Josef is furious that the two women look so glamorous that they actually draw attention to them all.) Lenka and Josef fall in love, as do Maria and Jan – Jan going so far as to ask Maria to marry him (his desperation for a normal life in obscurity again is almost physical).

The actual assassination is realistically messy and drawn-out, and the retribution that follows is swift and massive. The vengeful mass killings are alluded to, but what we get to see is one-on-one violence and torture which is even more shocking.

The assassination attempt takes place at the midway point and the second half is mostly concerned with the siege, when Josef and Jan – and the other five resistance fighters who’d been parachuted into Czechoslovakia with them on the same night – are cornered in a church. In a final, six hour shootout against the Nazis, as the church literally crumbles around them, they and other resistance members across Prague have to decide whether and when to save themselves from post-capture torture by taking their cyanide capsules or shooting themselves.

Anthropoid is an exhausting but rewarding watch, with strong performances. Despite the change of pace midway, the film never seems disjointed. It’s probably not a film you’ll want to see twice though.