You are here: Home / Film Reviews / Swallows and Amazons 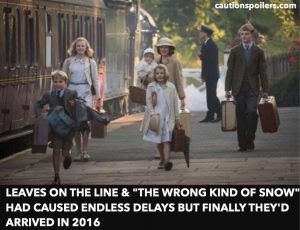 In the UK in the 1970s you really had to make your own fun, so a source of particular joy for children was sniggering at bedtime while one’s mother read aloud the exploits of the brilliantly named children Titty and Roger in Arthur Ransome’s classic tale of Lake District derring do. Sadly, though Roger remains the same in this 2016 adaptation, Titty has become Tatty.

That’s not the only change, so if you know and love the original please go and see this in the spirit of how much fun it is as a standalone movie rather than moaning about the wrong kind of boiled sweets in the shop.

Primarily the film diverges from the book by introducing a “real” adventure – where Jim the houseboat-dwelling writer (a brilliantly grumpy and uncompromising Rafe Spall), is genuinely suspected of being a spy, and is being chased by Russians, whereas the novel had the children creating their own mysteries about him instead.

This does make the film more of a genuine family adventure movie, and it is introduced very early (at the station before the family journeys to Cumbria for their Lake District holiday) – but it doesn’t always work, as sometimes there is genuine threat and danger from the Russians, and sometimes it’s all a bit slapstick villains. A scene where Jim writes a telegram to his Russian contact, which is then left on the side at the post office so the men chasing him can easily steal it, is silly when we’ve seen real guns and heard real threats.

Having said that there’s an amazing set piece near the start where the two Russians are sprinting along the top of the moving steam train while Jim (who has just met the Walker children for the first time by gatecrashing their carriage while their mum has popped out into the corridor for a crafty smoke) clings to the outside of the train door. It’s rather as if Skyfall was roleplayed on the Hogwarts Express.

The children’s father is absent captaining a destroyer in Hong Kong though he does send the famous telegram allowing them to row to an island on the lake and camp alone (I so wish we could get away with that now without someone calling Social Services) – “Better drowned than duffers, if not duffers won’t drown”. By now the family are staying with the (literally and figuratively) henpecked Mr Jackson, and his wife Mrs Jackson who probably holds the Guinness Book of Records title for baking the largest fruitcake of all time, in a rather ramshackle Bed & Breakfast – the kids are desperate to go off without their mum (who is probably equally desperate for some me-time so she can read Woman’s Weekly and darn some woollen stockings in peace.)

Once they are camping on the island, and having lost their food supplies over the side of their boat, Swallow, they survive on one of Mrs J’s planet-sized fruitcakes, and visit the local village by boat for more food. They also come to blows with the Amazons on the island, two local sisters (the nieces of grumpy Uncle Jim the houseboat-dwelling, parrot-owning spy) who consider Walker / Wildcat Island to be theirs.

The climactic scenes where the Swallows and Amazons (who have by now teamed up, possibly in a vain attempt to finally finish Mrs Jackson’s size-of-Wales fruit cake) try to save Jim from the Russians, is heavy on the rousing music, but slightly low on peril, as it’s hard to make what is essentially a slow race between two rather leaky rowing boats and a small seaplane seem terribly exciting. (It is quite exciting, but in a rather genteel fashion, like watching the sisters from Pride & Prejudice playing Speed Croquet where the prize is a husband with 5,000 a year.)

My own two little feral campers found a lot they related to in the film. We spent our 2016 holiday travelling to the Lake District by train, and while they rolled down hills, went boating, and ate lots of homemade cake, like the four Walker children they seemed to derive as much enjoyment from bickering and threatening to leave the other one behind at every opportunity.

The adult actors are excellent and the children are more natural than the kids in The Lion The Witch & The Wardrobe (which I know is 10 years old but we spent last year’s Lake District holiday watching it on repeat as it was the only DVD in our useless holiday cottage, so it’s my current go-to comparison for British child actors). Bobby McCulloch as Roger is fabulous, adorably cute but also excellent at conveying the frustration of having to prove himself to be allowed to do anything fun with his older siblings or being left behind “to keep watch”. And the wonderfully-named Teddie-Rose Malleson-Allen who plays Tatty is hilarious and very believable.

It’s not a perfect film and book purists will be spitting (parrot) feathers. But I’ve seen a lot of “three star but how I wish it was four star” British movies recently – you know the ones, where the cast seem to have had a ball making it but everyone forgot about the actual audience. So this take on Swallows and Amazons is quite refreshing, as it’s both a well made children’s film and is exciting enough to keep modern children reasonably entertained (and be madly jealous of the freedoms afforded to the Walker kids).

It’s also far more fun than watching the perfect family in “Topsy and Tim”, my 4 year old’s favourite TV show, which I can only bear by imagining a future where the twins are pot smoking drop-outs and their perfect mother has dropped the Boden and left dad Brian for a burlesque dancer called Crystal Decanter.

The scenery is stunning (in Swallows And Amazons, not Topsy And Tim), and while the bad guys jar occasionally, they do at least add some genuine peril to the situation beyond choking on Mrs Jackson’s homemade fruitcake.

buy / rent Swallows And Amazons on amazon video, dvd and blu-ray from amazon.com