You are here: Home / Film Reviews / Girl With All The Gifts 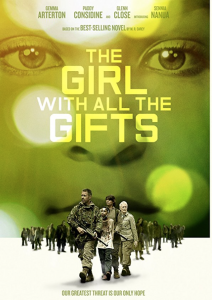 I love zombie movies set in the UK, as there’s something warm and safe about seeing the undead standing round aimlessly in shopping centres that I know really well. Maybe because allegories about the over-commercialisation of society are more easily understood if they’re trying to eat a Greggs pasty before their decaying arm falls off.

It’s no exaggeration to say that I feel a swell of patriotic pride as they wobble aimlessly in front of a few of my favourite stores, particularly M&S Simply Food which popped up in this film along with Timpsons Shoe Repairers.

Admittedly Girl with All The Gifts, while it has a shopping centre, has completely missed off the scene-setting rotating newspaper front pages careering into view with early-apocalypse headlines, and familiar newsreaders who’ve been roped in to play themselves looking concerned.

Luckily it more than makes up for it on other ways. This is a film that raises questions about how you should care for and treat people who are capable of causing great harm, but are also both hugely vulnerable themselves and not responsible for their behaviour. How do you keep everyone safe? What is the dividing line between human and monster; and (that perennial) who are the monsters? How quickly are we lulled into a false sense of security because someone triggers a feeling inside us?

Girl With All The Gifts is thrillingly terrifying, all the more so because our natural inclination is to look after children. And its allegories never overwhelm what is a perfectly modern and ambivalent tale.

Young Melanie (a very impressive Sennia Nenua), wakes in a sparsely furnished cell, counting to herself. A bell goes off and she gets up off her bed and takes off the wall two photos of a kitten which she then hides under her pillow. Soon soldiers wielding guns unlock her door and come in, one ensuring she is strapped into a wheelchair, unable to move. As she’s wheeled along basement corridors soldiers press themselves into the walls.

Soon the insults start, aimed at Melanie and a queue of other similarly wheelchair-bound children. Luckily once they’re in their schoolroom – in perfect rows, still strapped and unable to move – their teacher Miss Justineau (Gemma Arterton) treats them all with more respect and affection.

She reads them Greek myths, and even unties their writing hands so they can all compose stories, though she also makes a huge error by stroking Melanie’s head. A soldier, Sergeant Parks (Paddy Considine), comes rushing in and spits on his arm, holding it near one of the children, who instantly start baring their teeth and jerking as they struggle through their bonds to get to the limb, otherwise known as lunch.

Melanie and her classmates are zombies – second generation Hungries, infected while still in their mothers’ wombs, who still need to eat living flesh – but who are intelligent and can speak and think, unlike the running mindless hoards on the outside of the perimeter fence. She and the other children live in a fortified underground military installation, some years after a fungal infection has taken hold across the world, leaving just a few survivors.

Dr Cauldwell (Glenn Close) is near to finishing a vaccine which could put an end to new infections. Cauldwell doesn’t see Melanie as human at all, but just as an experiment and a means to an end. She’s scarily matter of fact, which is probably why she’s still alive.

But outside the fence the Hungries are restless and the defences are breached. In the end Melanie, Junstineau, Parks, Caldwell and a couple of soldiers escape in an armoured vehicle, as the military facility is completely overrun.

The small group aim to cross London to reach another facility, but soon their vehicle is damaged and they’re reduced to walking. With Windsor Castle in the background (one imagines our dear Queen nibbling daintily on a servant’s limb at 4pm with a cup of Earl Grey), they come to a vast shopping centre full of still and silent Hungries (Still-Hungries-Who-Are-Still-Hungry I should probably call them) then hole up in an old hospital. The next day, out in the city looking for food, Melanie finds a group of Hungry children just like her, but there appear to be no other survivors.

This is a film that twists our emotions in plain sight. Despite knowing Melanie and the other children have these Hungry instincts our natural inclination is still to sympathise. They are, after all, children. But she turns out to be a much more ambivalent character than we probably want. Though of course the irony is that by the end, her little group see her, at last, as a human child.

It is also the first zombie film I’ve ever seen reference the famous thought experiment Schrodinger’s Cat, where a cat is in a box with a trigger and radioactive material. If you don’t know the trigger has been set, is the cat in the box dead or alive? Both, most of us would say if we know of the experiment. And what are these Hungries if not both dead and alive?

Colm McCarthy’s film is a terrific addition to the Zombie Brit Flick genre (or indeed zombie films in general). The performances are excellent, as the humans become more humane and Melanie becomes wilder, as she tries to tread a fine line between her Hungry instincts and her love for her teacher. Gemma Arterton’s Miss Justineau is the most human of everyone on screen, looking for ways to love Melanie that keep them both safe.

Although the story unveils a little clunkily at times (“tell me where I’m from” asks Melanie, while chained to the radiator in the hospital, and we all settle down for the ghoulish zombie birth story as her origins are revealed) mostly it’s a mostly smooth storytelling that gradually explains where and who the children are, and what’s happening on the outside.

The last few frames – while echoing the beginning of the film – are clearly unsustainable long term in their future. Having said that, all zombie films are hard to “end” in a way that seems realistic or believable with any thought of a happy-ish ending, and of course a vaccine or cure would never be anything more than a sticking plaster at the start of a very long cross-generational climb back up to humanity.

buy / rent girl with all the gifts on vod or  buy the dvd or blu-ray at amazon.com

Watch the Girl With All The Gifts trailer now: