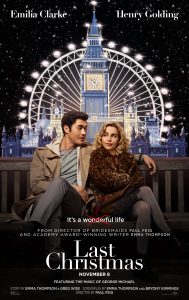 “You have thrown away your life, working in some silly Christmas shop!”

THERE’S NO SUCH THING AS A SILLY CHRISTMAS SHOP, MISTER!

I should know, I managed a Christmas department for two years, wearing musical reindeer antlers which only played Rudolph The Red Nose Reindeer on repeat from September to the end of the January sales, and flogging Santa’s Marching Bands at £100 a pop.

Which means now I can face ANYTHING. Even a holiday cheeseboard like Last Christmas, the festive romcom directed by Paul Feig, co-written by Emma Thompson and starring Emilia Clarke and Henry Golding. I’ve watched the trailer three times now and I’m almost – almost! – at the point of missing that hideous Wensleydale with added cranberries which would have added at least a teeny note of bite.

Last Christmas looks like slightly cringy heaven, lifted to mythically five star status by (a) CHRISTMAS (b) the use of “harrumph” in the synopsis (below), and (c) a soundtrack of George Michael numbers, and if they leave the famous song itself to the final credits I shall be asking for a refund, and so should you.

I love Christmas. I love George Michael. In fact I’m pretty sure that after a slew of movies featuring the music of icons (Elton, Queen, The Boss, and best of all ABBA) where I downloaded the whole soundtrack asap, this time I’ll  already have everything (except the previously unreleased GM music they’ve found, which I hope has been turned into a festive duet involving an animated elf).

You really need a synopsis? Okay:

“Kate (Emilia Clarke) harrumphs around London, a bundle of bad decisions accompanied by the jangle of bells on her shoes, another irritating consequence from her job as an elf in a year-round Christmas shop. Tom (Henry Golding) seems too good to be true when he walks into her life and starts to see through so many of Kate’s barriers. As London transforms into the most wonderful time of the year, nothing should work for these two. But sometimes, you gotta let the snow fall where it may, you gotta listen to your heart … and you gotta have faith.”

As I type it’s only 133 days until 25 December. So stop wondering if it’s too early to restart the annual “is Die Hard a Christmas movie*?” debate for 2019 and start trying on elf outfits.

*We all know that the ultimate Christmas movie is John Wick.

Last Christmas is out in the UK on 15 November and the US on 8 November. It also stars Emma Thompson as Kate’s mother and Michelle Yeoh as the Christmas shop owner.