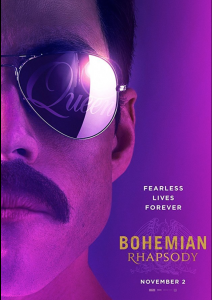 The Greatest Showman, they could have called this, had that title not already been taken – but I suspect in the long run Bohemian Rhapsody will have quite a lot in common with Hugh Jackman’s biopic of PT Barnum.

The Greatest Showman was criticised on release (including from me) for what it left out about the real-life man, and the suspiciously clean nature of Victorian America; yet the film went on to be hugely successful, currently enjoying a second life as a singalong show.

Now Bohemian Rhapsody is facing criticism (including from me) for glossing over key elements of Freddie Mercury’s life, from the crazy parties to his sexuality and his death from AIDS. They’re not ignored entirely but they deserve way more exploration and thoughtfulness than they get.

Still, I fully expect the public to take Bohemian Rhapsody to their hearts; partly through nostalgia and partly because, like Freddie, it’s an enjoyable crowdpleaser.

The songs are incredible, the recreations of their shows envy-inducing if you never saw them live. It lovingly showcases Queen’s creative processes – arguments, teasing, and threats of coffee maker-throwing included; and their connections with their fans, seeing themselves as a family of misfits playing to other outcasts.

Later when Queen guitarist Brian May writes We Will Rock You, he explains it’s because he wants to write a song the audience can participate in and feel part of, with the foot-stamping and the timed hand-clapping.

When we first meet Freddie (Rami Malek) as a teenage art student he’s already started using that name in place of his birth name Farrokh. He’s living at home but his father can’t understand why he’s out every night, and warns him to make sure his life is made up of “good thoughts, good words, good deeds”.

Freddie meets Roger Taylor (Ben Hardy) and Brian (a mostly steady and occasionally hilariously subversive Gwilym Lee) behind a club, moments after their lead singer quits. Soon Freddie is on stage with them, adding a layer of ambiguous glamour and style to their rock songs.

His girlfriend Mary Austin (Lucy Boynton), who works in fashion emporium Biba, loves his style and helps him with clothes and make-up; he’s madly in love and they even get engaged. But as Queen becomes more successful Freddie retreats from her (though his sexuality is only hinted at for a long time).

The film follows the band through their worldwide success, the recording of album A Night At The Opera, Freddie’s estrangement from them, his destructive relationship with leech-like manager Paul Prenter (a creepily jealous Adam Leech), and his showy lifestyle. It’s a heady trajectory, and a familiar one.

The album recording is a microcosm of band life. They squabble over silly things, write classic songs and overrun by weeks thanks to Freddie’s perfectionism. The band refuses to be confined to one genre but it’s Freddie who’s most committed to this; with Roger forced to sing a falsetto GALILEO! so many times during recording the tape nearly wears out.

It’s followed by a visit to EMI man Ray Foster (Mike Myers) as the band try to persuade him to release the six-minute Bohemian Rhapsody as a single (with a nod to Wayne’s World).

Malek is a revelation. It’s an extraordinary, mesmerising performance of churning self-belief, swagger, loneliness, and fear; and, crucially, Mercury’s ability to connect with all the other misfits just like him.

The resemblance is uncanny – with prosthetic teeth to mimic Mercury’s overbite (Freddie had four extra incisors which he claimed gave him a much bigger vocal range), Malek also has Freddie’s upwards head tilt down to a tee. (Apparently Freddie’s singing voice is a mix of three people’s, including Malek’s.)

Boynton is a supportive and knowing Mary (she reminded me of actress Sadie Frost), aware of what’s happening to her boyfriend before he does; though once Queen hits the big time she has little to do apart from demonstrate Mary’s continued place in Freddie’s life: occasionally turning up, often with her boyfriend in tow, then going home again almost immediately.

The physical similarities between the actors portraying May, Taylor and Deacon are astonishing, and the characterisation – Roger (Ben Hardy) is petulant, John (Joseph Mazzello, always drawing the eye) is uninterested in the madness, May is the thoughtful peacemaker until you push him – is deft. (Roger never looks any older, despite 15 years of rock star life; and, worse from the point of view of ageing, having children.)

The script is sometimes incredibly awkward, imparting information to get us up to speed with whatever year we’re up to in a film that spans a decade and a half. Freddie’s sexuality (he says he’s bisexual though Mary tells him bluntly that he’s gay) is initially only indicated through backward glances at men; the devastation of the AIDS crisis is played out on a couple of TV reports.

There’s also a quick history lesson over a birthday tea about Freddie’s Parsi heritage (it’s a necessary introduction though afterwards little is made of this or the tension between his family history and his new life and name change).

I did love the “origins” touches, from the creation of their classic songs to Freddie’s stage-prop mic stand – how much is artistic licence I don’t know.

Bohemian Rhapsody is entertaining but unsatisfying, skating over large parts of Freddie Mercury’s life and reducing a complex man with a complex life to someone almost entirely at the mercy of other, darker characters. It’s the movie version of the curated lifestyles we put on social media now. (Director Bryan Singer was fired before completion, with his duties taken over by Dexter Fletcher, though apparently this is almost entirely Singer’s film.)

Still, that final Live Aid performance is (forgive me one pun) guaranteed to blow your mind, even with a distracting crowd which mixes unrealistic close-ups of people singing and dancing with blurry CGI shots of the full stadium.

Malek is indeed the greatest showman as he owns the stage, the stadium and the whole event. Several minutes long, their set is an unhurried scream of love and triumph, that’ll bring back memories for anyone who saw Queen’s performance that day in 1985.